On Wednesday, January 22, 2020 the New York Giants veteran quarterback, Eli Manning, announced that he is retiring from playing professional football in the NFL after 16 long and successful seasons. He will be handing the torch over to last year’s first round draft selection, quarterback Daniel Jones, from Duke University. Jones performed decently in his game action during the 2019 – 2020 NFL season, and the Giants are confident he is the predecessor to Eli Manning. 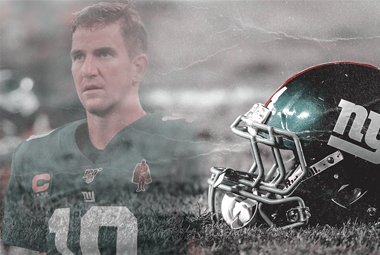 Does Eli Manning Belong in the Football Hall of Fame?

There is currently a very debatable consideration for whether or not Eli Manning deserves to be enshrined in the Pro Football Hall of Fame. I believe he does for leading the New York Giants to 2 Super Bowl victories and he was the MVP of both of those Super Bowls. Some people will argue his numbers are very average over the course of his 16 year NFL career, but his big game clutch performances especially those in the playoffs and Super Bowls are a major reason for those championships he helped bring back to New York. I do not think that the Giants would have won a Super Bowl over the last decades without his services at the very important quarterback position. It will be interesting to see how the voting goes once he becomes eligible for the Football Hall of Fame.

The Future of the New York Giants Football Team

Moving forward the New York Giants recently fired their former head coach Pat Shurmur, and they brought in Joe Judge as their new head coach for the 2020 – 2021 NFL season. Joe Judge has no previous head coaching experience, but he is coming from the Bill Belichick coaching tree from out in New England with the Patriots. Judge was a coach with the New England Patriots since 2012, and most recently he was the special teams coordinator as well as the wide receivers coach during the 2019 – 2020 NFL season. Joe Judge is one of the five new coaching hires in the NFL since the end of the 2019 – 2020 NFL regular season.

The New York “Football” Giants have some outstanding young and talented players currently on their roster. Above I mentioned their quarterback Daniel Jones that will be entering his second season this fall, but he will be the primary starter now that Eli Manning has decided to hang up his cleats. Last season Manning only started and played in 4 games. The incredible Saquon Barkley dominated the ground game over the first two years as the Giant’s primary running back.

The wide receivers currently on New York’s roster include Golden Tate, Darius Slayton, Sterling Shepard, Cody Latimer, Cody Core, Da’Mari Scott, and David Sills V. Some of those receivers are serviceable, but I think the Giants need to focus on surrounding Daniel Jones with better weapons to throw to. Their tight ends at the moment are Garrett Dickerson as well as Kaden Smith. Look for New York to build up their offensive line and add additional play makers either through the draft, free agency, or trade.

On the defensive side of the ball they have some stand out defenders such as safety Antoine Bethea, linebacker David Mayo, safety Jabrill Peppers, linebacker Alec Ogletree, defensive end Markus Golden, cornerback Deandre Baker, and nose tackle Dalvin Tomlinson. Their defense is average at best so this could be another area of focus to work on for the Giants front office as their build their team moving forward.

"For 16 seasons, Eli Manning defined what it is to be a New York Giant both on and off the field," says John Mara, the New York Giants president and chief executive officer. "Eli is our only two-time Super Bowl MVP and one of the very best players in our franchise's history. He represented our franchise as a consummate professional with dignity and accountability. It meant something to Eli to be the Giants quarterback, and it meant even more to us. We are beyond grateful for his contributions to our organization and look forward to celebrating his induction into the Giants Ring of Honor in the near future."

"I learned very early that you evaluate quarterbacks on their ability to win championships, and to do it late in a game when the game is on the line, that they're able to take a team down the field and into the end zone to win a title," former New York Giants general manager Ernie Accorsi stated.

"The second thing is to know that over a period of years, he's always going to be there. Those kinds of quarterbacks always give you a chance to win, and for 16 years, he did that for this franchise. He won championships and he was always there giving us a chance to win. I don't know how you can ask more from a quarterback."

"It was an honor and privilege to coach Eli, and to go through the wonderful and magnificent moments that he and his teammates provided for all of us in the world championship '07-'08 and '11-'12 seasons," says former New York Giants head coach, Tom Coughlin.

"The New York Giants, flagship franchise of the National Football League, have four world championships. You have four trophies sitting there. You have (Phil) Simms, you have (Jeff) Hostetler, and you have Eli for two. Eli Manning not only is the quarterback on those great teams, but he is the MVP of the Super Bowls. He's an incredible big- game performer. You talk about a guy that's great to coach, focused every day, took tremendous pride in preparing, practice, had a great sense of humor, was a cynic in the locker room. But the guys loved him and they loved him for it, and they played for him. The guys that had the opportunity to play with him know what it's like to be with a guy with as much talent, as much grit, as much determination."