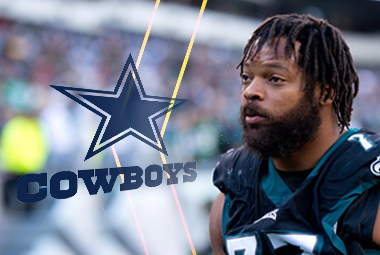 This trade was huge for the New England Patriots as it freed up about $2.5 million of salary cap space. Along with that, the Patriots restructured the contract of their starting right guard, Shaq Mason, which also cleared some salary cap space. With those two moves it enabled New England to pick up Mohamed Sanu Sr. from the Atlanta Falcons. Without both the trade and the restructuring of the contract they would have not been able to acquire the much needed wide receiver in Sanu.

The Patriots had recently suspended Bennett for one game after he got into a heated disagreement with the defensive line coach of the New England Patriots, Bret Bielema. This argument was apparently in front of other players and so was considered conduct that was detrimental to the team resulting in a one-week suspension.

The disagreement between Bielema and Bennett was over playing time that Bennett was not getting very much of lately. Hopefully the Dallas Cowboys will provide the defensive star with more playing time as the team’s defensive ends have been suffering from multiple injuries lately. Bennet is a veteran pass rusher that seems to still have a lot to offer the Cowboys and the NFL as long as he stays healthy and cooperates with their coaching staff.

"There's a lot of factors," says Patriots head coach, Bill Belichick. "Multiple considerations on this. Look, in the end, I think Mike is a good player. We brought him here, he helped our team, I think he would help us. We only have a certain number of; certain things we have to work with and work around, and that's what we have to do."

"It's America. You can voice your opinion about how you feel about certain situations. That's what I did," says Michael Bennett just after he returned from his suspension. "... I got suspended. Lost money. What am I supposed to take away from that? There's no love lost. It's just how it is."

"Rather than thinking about, 'OK, getting somebody from somewhere else,' we'll let the personnel people address that here at the outset and if something comes to us, that's when we consider it."