On Monday, March 8th, 2021 the Dallas Cowboys have agreed upon terms with their veteran superstar starting quarterback, Dak Prescott, to a four-year $160 million contract. This deal was definitely deserved for Prescott as the Dallas Cowboys had decided to use the franchise tag on him last year for 2020-2021 NFL season, and he ended up getting injured. Now Dak has some job security with this new agreement, and he can focus on winning football games as opposed to worrying about his financial future in the National Football League. 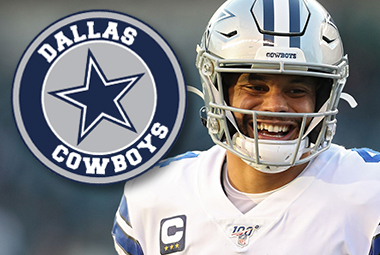 This new 4-year $160 million deal between Prescott and the Dallas Cowboys includes a $66 million signing bonus as well as a total of $126 million in guaranteed money. Dak will now average a $40 million salary annually. This contractual agreement carries the following stipulations:

Over the course of his illustrious career in the National Football League Prescott has completed 1,514 passes out of his 2,293 pass attempts which is good for a completion percentage of 66.0 %. He has thrown for 17,634 yards, 106 touchdown receptions, while managing to throw only 40 interceptions. Look for Dak to have a bounce back season in 2021 as he should be 100 % fully healthy and 100 % fully paid.

According to Intertops sportsbook these are the odds to win Super Bowl LVI as of Tuesday, March 9th, 2021.