Now that the Super Bowl has concluded the 2020 – 2021 NFL season, many teams of the National Football League are starting to make moves as the offseason is beginning to heat up. On Thursday, February 18th, 2021 the Philadelphia Eagles are trading their struggling quarterback Carson Wentz to the Indianapolis Colts in exchange for a couple of future draft picks. This trade agreement between the Philadelphia Eagles and the Indianapolis Colts will become official on March 17th, 2021 when the new NFL year begins. 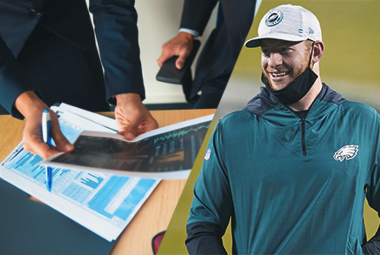 This new blockbuster trade has been in the works for the past couple weeks, and it should come to no surprise to anyone who follows the National Football League. The Philadelphia Eagles had previously said they were moving on from Wentz in order to start their young and talented quarterback, Jalen Hurtz. While the Indianapolis Colts were in desperate need of a starting quarterback after their former veteran QB Philip Rivers just recently retired from playing professional football following the conclusion of the 2020 – 2021 NFL season.

The Struggles of Carson Wentz

Some of the major concerns for Wentz revolve around his inability to stay healthy and remain on the field for his team. During his outstanding 2017 – 2018 NFL season he tore several ligaments in his knee in December of 2017 just prior to the Philadelphia Eagles playoff run which resulted in a victory in Super Bowl LII over Tom Brady and the New England Patriots. The following NFL season Carson suffered a stress fracture in his back as well. Although Wentz was injured multiple times over the course of his NFL career, he did put up some outstanding numbers during his first three NFL seasons.

That definitely changed last year as the now 28 year old quarterback had a completion percentage of 57.4 % which was ranked 34th in the NFL, and Carson was ranked first in sacks with 50 as well as first in interceptions with 15. His relationship with coaches and management soured due to his poor performance during the Philadelphia Eagles 2020 – 2021 NFL campaign resulting in him getting benched for the last four games in favor of the Eagles’ young star quarterback, Jalen Hurtz. Wentz is hoping a fresh start with the Indianapolis Colts will revive his NFL career as the Colts have a better system with more upgraded offensive weapons for him to move the ball with.

According to Intertops sportsbook these are the odds to win Super Bowl LVI as of Thursday, February 18th, 2021.