Maher just so happened to miss 4 extra-point kicks during last Monday night's wild-card win vs. the Tampa Bay Buccaneers, and he is very lucky that the Dallas Cowboys had a commanding lead the majority of that NFL playoff game otherwise his job in Dallas with the Cowboys would have most likely come to an end after last weekend. 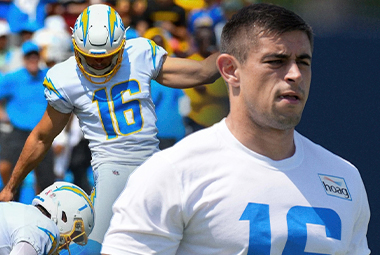 Although Maher’s job seems to be safe for now, if he seems to be struggling when he is kicking during practice on Thursday and Friday of this this week, the Dallas Cowboys might have to move on to Vizcaino to handle their place - kicking game from here on out during the 2022 - 2023 NFL playoffs. Tristan spent a portion of the 2020 NFL offseason with the Dallas Cowboys.

On Tuesday, January 17th, 2023 Fassel said Maher both realized that they were really just dealing with a case of the yips once Brett became the 1st - player in any National Football League game since the year of 1932 to miss 4 - extra - point kick attempts during either a regular - season or NFL playoff football game.

"I believe in the hot hand and I believe in the yips, absolutely," the Dallas Cowboys special teams coordinator, John Fassel, explained. "And you know, you wonder sometimes how you get into the yips and you wonder sometimes how you get back into the hot hand. I think it's keep stepping up to the line and shooting that thing. We missed a couple of free throws [Monday] ... He had a hot hand. Let's face it, he only missed [six] kicks all season. The yips happen, so I expect a hot hand coming up."

During the 2022 - 2023 National Football League regular - season, Maher made 29 of his 32 field goal attempts, and he only missed from 59 - yards 2 - times and 46 - yards once. Brett made 50 of his 53 extra - point kick attempts, but Maher missed his final point - after - touchdown attempt during the Dallas Cowboys 2022 - 2023 NFL regular - season finale in which they lost to the Washington Commanders followed by his stunning 4 - consecutive extra - point kick attempts vs. the Tampa Bay Buccaneers last weekend in the Dallas Cowboys NFL wild - card round playoff win.

"Life happens, man. I mean, look at our first three plays. We all had three drops," the Dallas Cowboys wide receiver, T. Y. Hilton, proclaimed. "It happens. And for him, man, like after the second one, I just went up to him and said, 'Chin up. Hey, we got you. We OK. We good.' Just continue to just let him get his confidence. All he needs to do is see one go in and he's fine. But it happens, man. Bad stuff happens, but we got his back no matter what."