During Major League Baseball’s winter meetings in San Diego, California, Stephen Strasburg was the first player to be taken off the free agent market as he agreed to terms on a new 7 year deal with his Washington Nationals. His new contract is valued at $245,000,000. Following Strasburg’s new contract, the other two big name free agents this offseason, Gerrit Cole and Anthony Rendon, also signed new contracts, but they signed with new ball clubs. 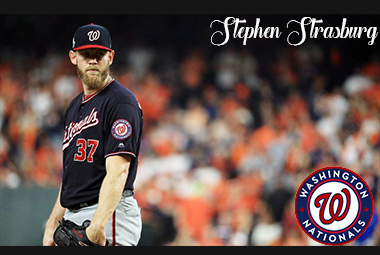 Strasburg’s previous contract had him signed him with the Washington Nationals from 2016 to 2023. It was a 7 year $175,000,000 deal that included a $10,000,000 signing bonus and he was scheduled to make $25,000,000 on average per year of that agreement. He had an opt out clause option after the 2019 or 2020 MLB season in which he exercised after last year making him a free agent. For those that do not remember he was the World Series MVP after last season as his Washington Nationals won the whole thing so his value couldn’t be higher than it is right now. He decided to sign with the Nationals again in free agency this offseason for a whole lot more money as can be seen in his new deal.

His new contract with the Washington Nationals is another 7 year deal but this time it is valued at approximately $245,000,000. Although there is no signing bonus worked into this agreement it includes a full no trade clause with an average salary of $35,000,000 per year from 2020 to 2026. There are also incentives such as the Cy Young or the MVP award worth $500,000, the World Series MVP award adds on $250,000, and the All Star, Gold Glove, and Silver Slugger awards all result in an additional $100,000. Strasburg had the most lucrative pitching contract in baseball history for less than a week as Gerrit Cole’s new deal with the New York Yankees just surpassed it as it was predicted to do so.

Scott Boris and his Deals during the Winter Meetings

Throughout the first three days of the Major League Baseball winter meetings, agent Scott Boras has managed to sign the three biggest free agents in baseball this offseason. If you add up the contact values of Strasburg ($245,000,000), Cole ($324,000,000), Anthony Rendon ($245,000,000), along with Mike Moustakas ($64,000,000) that totals an amazing $878,000,000 in contract negotiations in just a few days. Once he finalizes the new deals for Dallas Keuchel, Nicholas Castellanos, Hyun-Jin Ryu, and others this offseason he should surpass the $1,000,000,000 mark in total contract value. Scott Boras will likely be entitled to approximately 10% of those deals for his services rendered ($100,000,000). Gerrit Cole signed with the New York Yankees, Anthony Rendon signed with the Los Angeles Angels, Mike Moustakas signed with the Cincinnati Reds, and obviously Stephen Strasburg signed with the Washington Nationals.

"We are very excited to welcome Stephen Strasburg and his family back to the Washington Nationals," the Washington Nationals owner Mark D. Lerner stated. "His tremendous talent, work ethic and leadership have been a staple of our organization since the day we selected him in the 2009 MLB Draft. We would not have won the 2019 World Series or accomplished everything we have these last 10 seasons if not for Stephen's many contributions."

"I must say that for Stephen, for him to establish a legacy and wear the curly W for his career was something that was very important to him, and I think it was because he knew that people in this organization cared deeply about him and always cared about his interests and the interests of his family, and because of that, he decided to stay at home and stay in one uniform and remain a Washington National for the remainder of his career," Strasburg’s agent Scott Boras.

"Well, when you look at those comments, and then you look at the structure of this particular deal and the structure of deals we've had getting up to where we are right now, I think that Mark realizes that there's ways to fit players in, there's ways that you can field a championship-caliber roster -- and, again, the resources have always been there, so I don't expect that to change," the Washington Nationals general manager Mike Rizzo explained.

“Stephen also made sure that he wanted to do something in this contract that allowed the team to sign the best players and to have the best teams, and he did that,” Boras expressed. “The mutuality, the intentions were there, so that allowed us to reach a deal rather quickly.”

“Welcome home; glad to have you back,” Rizzo emphatically exclaimed. “Although you only left for a minute.”