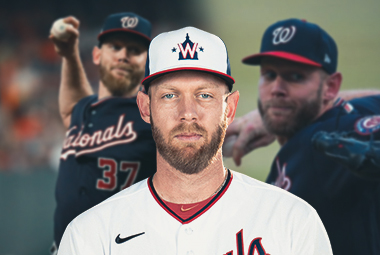 The Washington Nationals ended up winning that ball game against the Atlanta Braves with a final score of 11 to 6 despite the 32 – year – old Strasburg being forced to leave the mound after only 1 and 1 / 3 innings of baseball Tuesday night. This injury to Washington Nationals’ World Series champion and National League wins leader from 2019 only added more pressure to the already taxed Washington Nationals’ 2021 starting pitching rotation.

The veteran left – hander Jon Lester was forced to start Wednesday night’s (6 / 2 / 2021) ball game against the Atlanta Braves once again on just 3 days’ rest. Luckily the Washington Nationals ended up coming out victorious in that baseball game versus the Atlanta Braves as they won the match – up with a final score of 5 to 3.

Strasburg is No Stranger to the MLB’s Injured List

This is Stephen's 2nd appearance on the extremely crowded Major League Baseball injured list over the course of the tumultuous 2020 MLB season. Strasburg was initially shut down from April 15th, 2021 through May 21st, 2021 because he suffered from inflammation to his right shoulder.

That previous and recent injury endured by Stephen Strasburg correlated to the ultimate decision by the Washington Nationals’ manager, Dave Martinez, to get his right – handed ace starting pitcher out of the ball game so early from the Game in Atlanta, Georgia on Tuesday night. Martinez explained that Strasburg "was a bit frustrated'' when the two spoke together on Wednesday, June 3rd, 2021.

This will be the fourteenth trip to Major League Baseball’s injured list during Strasburg’s illustrious 12 – year MLB career. Stephen has won an incredible 113 games with the Washington Nationals, but Strasburg has made only seven starts since posting an unreal record of 18 and 6 record to go along with his earned run average of 3.32 back in his magical year of 2019 with the Washington Nationals.

The present manager of the Washington Nationals, Dave Martinez, stated that his staff as well as himself were, "Banging our heads now trying to figure out something for Sunday,'' just as soon as Strasburg was reportedly scheduled to make his next big league start for the Washington National as they geared up for an intense divisional rival in the Philadelphia Phillies.

Martinez goes on to say, "He came back and felt good and had these issues with his neck going on yesterday. I told him let's get him checked out and see where he's at. I know he's frustrated because he feels he let the team down and let me down, but I don't want him to even think like that.''

According to Bovada sportsbook below are the odds to win the MLB 2021 World Series as of Saturday, June 5th, 2021. Currently the Washington Nationals have the 8th lowest odds to win it all for this exciting 162 game regular season of Major League Baseball in addition to the 2021 MLB playoffs.