On Thursday, September 30th, 2021 the Baltimore Ravens’ highly – talented and explosive veteran quarterback and former NFL MVP, Lamar Jackson, did not practice, and he has missed multiple practices with this as he is currently recovering from a sore back. Jackson endured a minor back injury back in week 2 of the 2021 – 2022 NFL season when he flipped into the endzone as he was hit helping his Baltimore Ravens defeat Patrick Mahomes and the mighty Kansas City Chiefs. 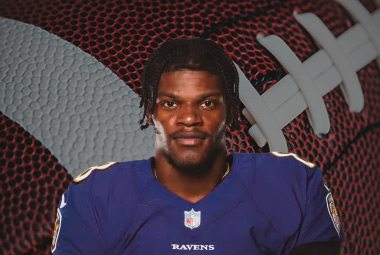 Thursday marks only the 2nd time in his illustrious 4 – year NFL career in which Lamar has missed consecutive practices in the regular season. The Baltimore Ravens currently have recorded an overall record of 2 and 1 thus far this season, and they will be hitting the road to face off against the 3 and 0 Denver Broncos this Sunday afternoon from Empower Field at Mile High Stadium located in Denver, Colorado.

The Baltimore Ravens only have one more practice prior to their road game against Denver Broncos this weekend, and Jackson is listed on the Baltimore Ravens’ injured list as questionable because of his sore back. Since entering the National Football League Lamar has never been sidelined for a game due to an injury as he is one tough cookie who puts his body on the line for his team every week with all his rushing attempts from the quarterback position as well as all of the hard hits that he consistently endures for the love of the game.

Thursday just so happens to be just the 9th regular season practice that Jackson has missed during his NFL career, most of his other absences have been a result of illness and positive COVID – 19 tests. Please do us all and more importantly your team a favor and go get vaccinated Lamar!!!

The last time Jackson missed back – to – back practices in a regular season setting was in week 5 of the 2020 – 2021 NFL season, He missed the first day of practice with a knee injury followed up the next day with a debilitating illness. After returning for full participation for the final practice of that week, Lamar had a disappointing career - low 2 rushing attempts, although the Baltimore Ravens won that game over the Cincinnati Bengals with a final score of 27 to 3.

This year Jackson has taken on more tacklers than he has in the past, and he has been hit a league - high 44 – times which is 5 more than any other quarterback in the NFL this season. It's also the most hits Lamar has sustained during the first 3 games of a season since becoming the starting quarterback of the Baltimore Ravens midway through the 2018 – 2019 season of the National Football League.

In last Sunday's miraculous 19 - 17 win against the Detroit Lions, Jackson sustained some hard hits and got sacked a season - high 4 – times, yet he was able and did participate in all 58 offensive snaps for the Baltimore Ravens. With all of the devastating injuries to the Baltimore Ravens best starting running back options such as J. K. Dobbins and Gus Edwards who are both out for the remainder of the season, Lamar has carried the load for the Baltimore Ravens as their top rushing threat. He ranks 4th in the NFL with 251 rushing yards.

“(Jackson is dealing with) a little back flare-up," the Baltimore Ravens offensive coordinator, Greg Roman, explained to the sports media relations correspondents surrounding the Baltimore Ravens practice facility on Thursday, September 30th, 2021. "I don't think it's anything serious. But we're just going to have to kind of wait and see. I think he's going to be in good shape. We'll wait and see."

"We definitely want him and everybody out for every practice," Roman goes on to say. "When they're not, we adjust accordingly. Thankfully, we've been in this system going into three years now. With Lamar, it's a little bit different than a guy who just got here."

The now 6 – foot 2 – inch and 212 – pound Jackson was born in Pompano Beach, Florida and he attended Boynton Beach Community High School located in Boynton Beach, Florida. As a child Jackson idolized the former amazing, fast, and mind – blowing superstar NFL quarterback Michael Vick who a lot like Jackson made big things happen on the football field with his legs and yes of course because he was black! I know that black quarterbacks are more common these days but during Lamar’s childhood days that was a very rare occurrence.

Jackson decided to enroll at the University of Louisville to play his NCAA college football with the Louisville Cardinals. After dominating the college football landscape for three years with not only his arm but his legs as well, Jackson hired an agent and declared himself eligible for the NFL draft.

With the overall 32nd selection in the first – round of the 2018 NFL Draft the Baltimore Ravens picked Lamar Jackson, and they have never looked back since then. Throughout his four seasons playing pro football in the NFL, Lamar has made all the doubters shut the fuck up by showing them his reckless and aggressive style of quarterback play can translate into a successful long – term franchise quarterback situation in the National Football League. Let’s just hope that Jackson can remain healthy as he is a true joy to watch on the field each and every Sunday during football season.