On Saturday, February 29th, 2020 the Kansas Jayhawks traveled just north to take on their in state Big 12 rivals in the Kansas State Wildcats from Manhattan, Kansas. The last time these two programs faced each other on Tuesday, January 21st, 2020 the game ended in a wild and violent brawl at the Phog Allen Fieldhouse in Lawrence, KS. Fortunately, the rematch was played with the utmost sportsmanship and respect on both sides.

The “Sunflower State Showdown” last week was a highly contested basketball game that featured some momentum swings early on leading up to a close and very exciting finish. The heavily favored Kansas Jayhawks ended up squeaking out the 62 to 58 win as K State came up just short down the stretch. 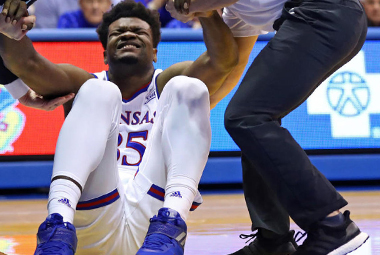 The biggest story of the contest came in the first half when the Jayhawks dominating senior big man, Udoka Azubuike, came down hard on his foot that was bent inwards. After turning his ankle, he exited the game to receive medical attention in the Kansas locker room. He was able to return to action in the second half, but it was obvious that he was hobbled badly.

It was apparent that this injury rendered his performance quite ineffective. Udoka finished the game with only 6 points and 9 rebounds which is significantly under this season’s averages of 13.1 points and 10.3 rebounds per contest. Where he was most noticeably not his usual self was on the defensive end of the court. His smothering defense down low in the paint blocking as well as altering his opponent’s shots was just not there against Kansas State following the injury.

Importance of the Big Man for KU

Azubuike is currently on pace to become the most accurate shooter in Division 1 history. His unbelievable field goal percentage is sitting at an astonishing .743 at the moment. Over the course of his 4 year college basketball career at Kansas he has helped the Jayhawks win 73 of the 85 games that he has participated in.

According to sources the formidable and intimidating center has spent the last several days in a walking boot in order to protect the sprained ankle. Kansas is scheduled to play the TCU Horned Frogs at home on Wednesday, March 4th, 2020, and Udoka is currently listed as questionable for that match up. The Jayhawks will play their last regular season game the following Saturday against Texas Tech.

With only two events left on the Jayhawks regular season schedule I believe that Kansas’ head coach, Bill Self, should be extremely cautious when playing the 7 footer as he is entirely too valuable to his team. Azubuike should be at full health for the upcoming Big 12 conference tournament next week which will lead right into March Madness.

The Nigerian native is such a dominant force at 7 feet tall and 270 pounds. That is around the size of Zion Williamson for your information. He dunks with unforgiving authority, he plays relentless defense as one of the best rim protectors in the game, and he pulls in mad rebounds on both the defensive as well as offensive side of the court. 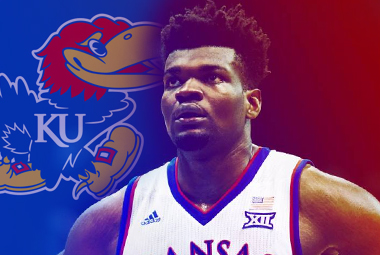 The Current Status of the Kansas Jayhawks

As of Tuesday, March 3, 2020 KU has an overall record of 26 and 3 as they enjoy the unanimous number 1 ranking from the Associated Press men's college basketball poll that was released yesterday. They are half a game ahead of the Baylor Bears in the Big 12 with a conference record of 15 and 1.

Believe it or not, Azubuike may not even be the best player on the Jayhawks roster this year. The superstar sophomore point guard for Kansas, Devon Dotson, is on quite a tear. He leads the Big 12 in scoring by averaging 18.2 points per game to go along with his 3.9 rebounds and 4 assists per contest. His shooting percentage from the field is 47.2% as of now. Look for him to have huge performances over the next month. Dotson is clearly the leader of this potent Kansas Jayhawks squad.

Being so highly ranked and dominating the NCAA regular season as well as the Big 12 conference is nothing new for the Kansas Jayhawks. They are a perennial college basketball powerhouse, and this year is no different.

One advantage for KU this season is that the other top ranked competition seems to coming from unlikely schools. Teams such as North Carolina and Duke are surprisingly not even in the top ten at the moment. This is rare as we are vastly approaching the NCAA Men’s March Madness Tournament which begins on Thursday, March 19th, 2020. Last year’s NCAA March Madness National Champion Virginia Cavaliers are currently in the # 22 spot.

"That's my boy. We talk pretty often," Devon Dotson stated. "I think it's great. There wasn't any big back-and-forth. It was a really tough game, a good game. It was good for the fans."

"That made us play a lot better," says Kansas Jayhawks head coach Bill Self. "It goes to show you that when teams are turned up and play with an edge, different things can happen."

"Obviously the first one ended in a not-a-special moment. We wanted to make sure this one started with a positive moment," says Weber, "and we can move forward now. Worry about the game and how it's played."

"I didn't think either team played particularly well offensively," Self expressed. "I thought both teams guarded. We did rebound the ball. Our first-shot defense was pretty good. That gave us a chance."

"That made us play a lot better," Self responded. "It goes to show you that when teams are turned up and play with an edge, different things can happen."

"I've never had a team surprise me as much as this one did," says Gonzaga Bulldogs head coach Mark Few. "We don't have lottery picks. But they worked and listened and were coachable. Our whole is definitely greater than the sum of the parts."

"He didn't practice or anything," Self told the Kansas City Star. "We'll see if he can do anything [Tuesday]. The status on him would still be considered 'questionable probably at best' for Wednesday. I know he really wants to try to go for a lot of reasons, also it being Senior Night ... not too many guys spend four years in school to sit that one out. He'll do everything he can to get back."

"He showed some toughness coming back (into the game)," Self stated. "But I imagine he'll be fine. Big guys like that, a turned ankle probably affects (them) more than a guard."

"We play next man up," said Dotson.

"I mean, of course we're going to feel for him and make sure he's all right, but a player going down, it can't stop us that particular game in the moment. Coach told us we've got to play. We can't feel sorry, and if we do, they're going to take advantage of that, so we've just got to keep confident."

"It's a great feeling," says TCU senior guard Desmond Bane. "To be rewarded like this and beat a great team, it shows how far we've come since November. ... It's something that comes from being TCU, that underdog mentality."