On Friday, March 13th, 2020 the Chicago Bears and veteran starting middle linebacker, Danny Trevathan, came to terms on a three year contract extension. The Youngstown, Ohio native is now under contract with the Chicago Bears through the 2022 – 2023 NFL season.

The former Super Bowl 50 champion with the Denver Broncos is now a leading force on the aggressive forefront of the Chicago Bears defensive unit. Trevathan originally signed with the Chicago Bears during free agency in the 2016 NFL offseason, and while healthy he has been a solid field soldier for the “Monsters of the Midway”. He is well known around the Bears facility as an exceptional and inspiring leader as well. 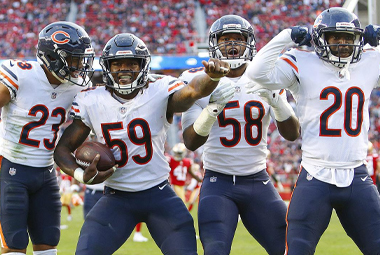 One piece of the defense the Chicago Bears have always been known for is their amazing and talented linebackers. From all time greats in the National Football League such as Mike Singletary, Dick Butkus, Brian Urlacher, and Bronko Nagurski to their current roster of solid linebackers like Khalil Mack, Roquan Smith, Leonard Floyd, and Nick Kwiatkoski.

Kwiatkoski may not be around for the Chicago Bears this upcoming 2020 – 2021 NFL season as he is currently a free agent during this offseason. Although Kwiatkoski was mostly utilized by the Chicago Bears as a back up middle linebacker and special teams stand out, the 26 year old made a name for himself while filling in for injured Bears over the last couple years.

For example, last season when Trevathan missed 7 games due to a nasty elbow injury he suffered against the Detroit Lions in week 10 Kwiatkoski filled in seamlessly. With free agency beginning this week sources are revealing that Kwiatkoski will be generating high levels of interest from other organizations besides the Chicago Bears.

Other Possible Offseason Moves for the Chicago Bears

Rumors have circulated that the Chicago Bears are focusing on signing a veteran quarterback to compete with Mitchell Trubisky for the starting on field signal caller for Da Bears offense as well as help Trubisky develop more at his craft. Possibilities for that role include Marcus Mariota, Ryan Tannehill, Philip Rivers, Case Keenum, Teddy Bridgewater, Taysom Hill, and of course the elusive Tom Brady.

The Chicago Bears generally select decent defensive players in the NFL draft so hopefully they continue to build the defensive pipeline with talented young soon to be rookies. Another area of focus either in the 2020 NFL draft or through free agency should be thinking about picking up a solid tight end or even another wide receiver. The better the Chicago Bears surround their quarterback with offensive weapons the chances of them putting up more points greatly increases, and the offensive production was a weak spot for Da Bears last season.

It would be wise for the Bears to take a look at some of those former National Champion LSU Tigers. Possibly some players out of University of Alabama who play out of nice pro style systems. The Chicago Bears appeared to be one or two good players away from being a major contender in the NFC North as well as the entire NFC.

"Bringing Danny back is a key re-signing for us," the Chicago Bears general manager, Ryan Pace stated. "Not only is he a great inside linebacker and great leader on our team, he is a big part of our culture. We are proud to have him under contract in Chicago for three more seasons."

"He's such a great leader," says Pace. "He's such a good player. Obviously, when he was hurt last year that hurt our defense for a multitude of reasons. But he's an important part of what we're doing."