On Monday, January 13th, 2020 the LSU Tigers played the Clemson Tigers in the NCAA college football playoff finals at the Mercedez – Benz Superdome in New Orleans, Louisiana. Both teams entered the sporting event with an undefeated record of 14 and 0. Clemson was ranked # 3 and beat the Ohio State Buckeyes in the college football playoff semifinal game while LSU was ranked # 1 and they defeated the Oklahoma Sooners in their semifinal game of the NCAA playoffs. 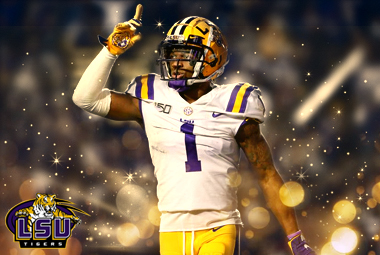 The action seriously picked up in the second quarter as B.T. Potter nailed a long 52 yard field goal for Clemson. The ACC champions followed that up with a 36 yard rushing touchdown by Tee Higgins which put Clemson up 17 to 7. At this point in the game LSU seemed to be trouble as their high powered offense wasn’t producing due to the defensive effort from the Clemson Tigers who had the momentum.

Joe Burrow then went on a serious tear beginning with his 3 yard touchdown run. Then Burrow hit Ja'Marr Chase on their second touchdown of the night this time on a 14 yard pass. Right before halftime Burrow completed a 6 yard touchdown throw to Thaddeus Moss putting the LSU Tigers in the lead 28 to 17 as the thrilling first half of the game came to an end.

The first score of the third quarter came at the hands of Travis Etienne on a 3 yard touchdown run. Clemson was able to convert on a two point conversion as well cutting the deficit down to only 3 points. It was anyone’s game as the anticipation for a profound conclusion was on the mind of fans everywhere. Joe Burrow proceeded to toss a 4 yard touchdown pass to Thaddeus Moss who happens to be the son of Randy Moss, an NFL all time great wide receiver. The third quarter finished with LSU winning 35 to 25.

With only 15 minutes left on the game clock and Clemson down by ten points, they needed to put some points up while keeping LSU off the board. Unfortunately for Dabo Swinney and his Tigers they struggled to produce offensively at the end of the contest. Joe Burrow found the end zone one more time on a nice 24 yard completion to Terrace Marshall Jr. adding another 7 points to their score total. The LSU Tigers defeated the Clemson Tigers 42 to 25 to win the NCAA college football national championship! 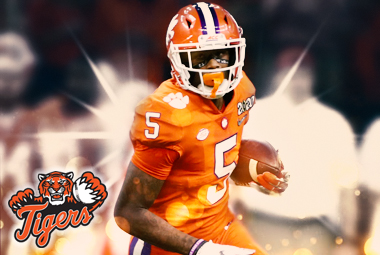 The offensive most valuable player award of the NCAA college football national championship game was given to the amazing starting quarterback of the LSU Fighting Tigers, Joe Burrow. The senior from Ohio wearing number 9 capped off his unbelievable season in this victorious finale against Clemson with 5 passing touchdowns, 1 rushing touchdown, and 0 interceptions. He completed 31 of 49 passes for a sweet total of 463 yards in this national championship game.

Burrow was the recipient of the coveted Heisman Trophy this college football season as well. He had an overall outstanding senior season leading his team with his highly impressive performances after a very average junior year with LSU. He previously transferred from Ohio State following his sophomore season with the Buckeyes. Joe Burrow will most definitely be selected with the number one overall pick in the 2020 NFL draft by the Cincinnati Bengals. Hopefully he can turn that franchise around as the Bengals were the worst team in the National Football League during the 2019 – 2020 NFL season with a record of 2 and 14.

The defensive most valuable player award of the NCAA college football national championship game went to LSU’s junior middle linebacker, Patrick Queen. He led the Fighting Tigers in tackles as he had 6 solo take downs as well as 8 total tackles in this matchup against Clemson. 2.5 of those tackles were for a loss of yards, and Queen recorded half a sack too. He has been a leader of the defense all season long which culminated in this national championship for LSU.

Joe Burrow set college football records for the most passing touchdowns (5), most total touchdowns responsible for (6), and passing yards (463) in a BCS or College Football Playoff title game. He became the first major college quarterback to pass for 60 touchdowns in a season as well. His 5,671 passing yards is a record for the most ever in a single season in the SEC. Burrow will be remembered as one of the best college quarterbacks of all time, and the most prolific quarterback in LSU’s football history.

"He's one of the greatest players in LSU history," says LSU Tigers head coach, Ed Orgeron. "He's done so much for the state of Louisiana and LSU. We are so grateful to Joe Burrow."

"This is what I wanted to do from the time I was 5 years old, was hoist this trophy. And bringing it back to Louisiana," Joe Burrow goes on to say, "I guess we're in Louisiana, but staying in Louisiana, we weren't going to let someone come in here and steal this from us in our home state.

"We have a great fan base that came out and supported us. We were going to keep this thing right here."

"I hate how it finished," Trevor Lawrence stated. "But man, we did some really amazing things."

"It's been a long time since I've stood in front of a team after a loss," Clemson Tigers head coach Dabo Swinney explained.

"Coach Venables is great at what he does, it just took us a while to get it figured out," Burrow exclaimed.

"Weapons all over the field. We've been seeing it all year," LSU Tiger safety Grant Delpit expressed. "Just seeing how many weapons we had on offense is just crazy."

"I don't know about the whole hero thing," says Burrow, "but I know this national championship will be remembered for a long time in Louisiana."