On Saturday December 28th, 2019 there are the two scheduled NCAA men’s college football playoff games. The first game between the #1 Louisiana State Tigers and the #4 Oklahoma Sooners in the Chick-Fil-A Peach Bowl is going to be played at the Mercedes-Benz Stadium in Atlanta, Georgia. This contest begins at 3:00 pm CST.

The second match up is between the #2 Ohio State Buckeyes and the Clemson Tigers in the Playstation Fiesta Bowl. This game takes place at 7:00 pm CST and State Farm Stadium in Glendale, Arizona. I will preview these huge games with analysis, news stories, and media statements from those closest to these big time NCAA sporting events. 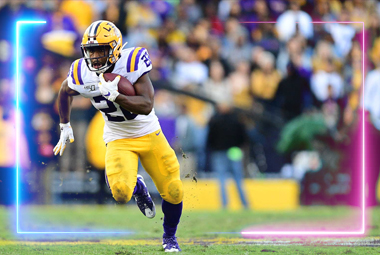 The Chick-Fil-A Peach Bowl involves too teams that have the reputation of being offensive powerhouse college football teams. Interesting enough both the starting quarterbacks of these football squads transferred from other Universities prior to this season. Joe Burrow of the LSU Tigers transferred from Ohio State University while Jalen Hurts left Alabama to join the Oklahoma Sooners after Tua Tagovailoa took over as the starting signal caller with the Alabama Crimson Tide. Joe Burrow just won the Heisman Trophy for his performances throughout the 2019 NCAA college football season. Jalen Hurts was a runner up in the Heisman Trophy considerations.

The LSU Tigers went undefeated during the NCAA college football regular season with a record of 12 and 0 putting them in the SEC Championship game against the Georgia Bulldogs. LSU dominated that contest as they won that match up 37 to 10 in early December as they increased their overall record to 13 and 0.

Their largest win of the 2019 college football season was most likely that crazy game against the Alabama Crimson Tide before Tua Tagovailoa seriously injured his hip resulting in season ending surgery for the superstar quarterback of Alabama. The Tigers beat the Tide in a close battle. Due to LSU playing in the strong and competitive SEC conference they had a very high strength of schedule ranking. Their offense carries them although they are pretty solid on defense as well.

Key Players for the LSU Tigers

Key Players include their starting quarterback Joe Burrow. Their number one running back Clyde Edwards-Helaire racks up big yards for the Tigers as well as being a threat to catch passes out of the backfield. Tyrion Davis-Prince is their second highest producing running back followed by John Emery Jr. Their fleet of outstanding wide receivers include Justin Jefferson, Ja'Marr Chase, Thaddeus Moss, Terrace Marshall Jr., Racey McMath, and Derrick Dillon. Their defense has some nice players on it too.

The top leading tacklers for LSU are Jacob Phillips, JaCoby Stevens, Patrick Queen, Grant Delpit, K'Lavon Chaisson, and Damone Clark. One factor that may be detrimental to the LSU Tiger offensive attack is that Clyde Edwards-Helaire suffered a hamstring injury during practice last week, and he is listed as questionable this Saturday’s game at the moment. He has a chance to play, but we will have to wait to find out for sure.

Although Oklahoma is in a lighter conference which is easier to win than the SEC, they have a spectacular record of 12 and 1. There one loss came against the Kansas State Wildcats with the Sooners on the road playing in Manhattan, Kansas. The final score of that contest was 48 to 41 as Oklahoma only lost by one possession / one touchdown. They won the Big 12 conference after beating the Baylor Bears barely as that game went to overtime and the Oklahoma Sooners won by the final score of 30 to 23. With only one loss they deserved to get into the NCAA college football playoffs as other big name programs like Georgia, Alabama, and Florida all have multiple losses.

Key Players for the Oklahoma Sooners

"I think teams win championships," says LSU’s head coach Ed Orgeron. "We have obviously been very, very good on offense. But in order for us to get here, our defense has had to improve throughout the season, and I think they have.

"In order for us to get to where we want to go, our defense has to play very, very well in the Peach Bowl against an outstanding offense."

"I know Clyde's going to do all he can to get back as soon as possible," center Lloyd Cushenberry of the LSU Tigers explained. "Whoever gets carries, it's on us up front to do our job so they can make plays."

"In all reality," the Oklahoma Sooners starting quarterback, Jalen Hurts said, "not a game that I won at Alabama, not a passing touchdown, a rushing touchdown, not anything I did at the University of Alabama is going to help us win games -- help me win games -- at Oklahoma."

"A lot of people said you're not going to make the playoff after you lose at Kansas State. So it's not the first time we've been told something like that, and I like how our team has responded."

The Ohio State Buckeyes and the Clemson Tigers have a great deal in common. They both are at the undefeated mark of 13 and 0. They both won their respective conference as Ohio State won the Big 10 and Clemson won the ACC. Finally, the Tiger and the Buckeyes have gained very valuable experience in the NCAA college football playoffs over the past several years. Clemson has won the National Championship 2 out of the past 5 years and Ohio State won the whole thing during the 2014 – 2015 season. This will be one hell of a match up this Saturday evening.

The undefeated Ohio State Buckeyes have dominated this entire season. Most of their games were blowouts, and I don’t remember them having a near loss all year long. Their major victories were against the Michigan Wolverines, the Penn State Nittany Lions, and the Wisconsin Badgers. The Buckeyes lead the college football landscape with a margin of victory 36.2 points per game. This upcoming semifinal game should be their most difficult test so far this season. The Ohio State University is number 1 in scoring, number 3 in scoring defense, and number 2 in total defense.

The Clemson Tigers were heavily criticized for playing a weak strength of schedule, but part of that is due to the fact that they play in the ACC conference which is currently lacking quality opponents. They did almost loss to the North Carolina Tar Heels. In fact, they should have lost that game, but got a crucial stop on a two point conversion that would have won the defensive battle for UNC. Clemson ranked second in margin of victory, fourth in scoring first in scoring defense, and first in total defense.

The Tigers from Clemson in South Carolina are highlighted by their fearless leader at quarterback in Trevor Lawrence. The star running backs are Travis Etienne and Lyn-J Dixon. Their highly targeted wide receivers that have bringing the success to the passing attack include Justyn Ross, Tee Higgins, Amari Rodgers, and Diondre Overton. Their leading defensive stars have names such as Isiah Simmons, James Skalski, Chad Smith, and K'Von Wallace.

"We have been in a lot of big games," says Clemson’s head coach Dabo Swinney. "All of our true juniors and true sophomores have played in big games."

"At the end of the day, you've got to beat the best to go win the national championship, and certainly Clemson is that," Ohio State’s first-year head coach Ryan Day explained. "What matters at the end of the year is who's won, not right now."

"They don't have a weak link on their team," Clemson junior linebacker Isaiah Simmons stated. "They're good at all 11 positions. All 22 positions, matter of fact."

"My knee is not where I want it to be right now, but I think with treatment every day and just resting it every day, hopefully it will be better by the game," Fields exclaimed, adding that he expects to wear a lighter knee brace as opposed to the bulky offensive lineman's brace he wore against Wisconsin.

"I'm just going to hope and pray that I feel better by game day," he goes on to say.

"It's been everything I hoped for, and everything I think this team hoped for," Clemson’s starting quarterback Trevor Lawrence said. "We're still on pace to do everything we wanted to do."