On Monday, March 9th, 2020 the Buffalo Bills agreed to sign star cornerback free agent, Josh Norman, to a 1 year $6 million contract. The new agreement is valued at $8 million after including the incentives that are built in to this new deal.

Sean McDermott is now the head coach of the Buffalo Bills who was Josh Norman’s defensive coordinator during his time with the Carolina Panthers from 2012 to 2015. This means that they are already comfortable with working with each other. 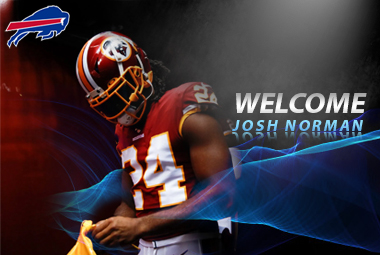 The Buffalo Bills signed the former Houston Texan’s first round pick Kevin Johnson in 2019 as well. Apparently both Wallace and Johnson are free agents at the moment, and Buffalo has the exclusive rights to sign Levi Wallace for the 2020 – 2021 NFL season and beyond. The team is most likely going to retain Wallace according to the Buffalo Bills general manager, Brandon Beane.

Norman played his collegiate football at Coastal Carolina, and he was selected in the fifth round of the 2012 NFL draft with the 143rd overall pick by the Carolina Panthers. Norman played with the Panthers for 4 years from 2012 through the 2015 – 2016 NFL season. Carolina decided to use the franchise tag on Norman, but they ultimately rescinded that franchise tag during the 2016 offseason.

The star cornerback then quickly signed a five year $75 million contract with the Washington Redskins. That made him the highest paid cornerback in the NFL at that time. Norman played 4 years with the Redskins from 2016 through the 2019 – 2020 NFL season. On February 14th, 2020 Washington’s recently acquired head coach, Ron Rivera, contacted Norman to let him know the Redskins were releasing him. This move saved the Washington Redskins $12.5 million in cap space.

The controversial defensive back will now join the Buffalo Bills for the upcoming NFL season before once again becoming a free agent following the conclusion of the 2020 – 2021 football season. During his eight years in the NFL Norman has recorded 416 tackles, 79 passes defended, 14 interceptions, 2 touchdowns, 12 forced fumbles, and 1 sack.

The Buffalo Bills went 10 and 6 last season, and made a playoff appearance in which they lost a heart breaking game to the Houston Texans largely due to a huge performance from Deshawn Watson. Hopefully for Norman the Bills will be contenders again this upcoming National Football League 2020 – 2021 season.

"I have no doubt that Levi can go out there and earn it again, but we're not into just giving out jobs,” says the Buffalo Bills general manager Brandon Beane. “He knows that. He had a little offseason procedure on his shoulder. He's got to overcome that as well. So we have to protect ourselves. There can always be setbacks.”

"I was happy with Kevin. I thought he did a nice job," Beane stated. "I think missing a year, it probably took him a little time to get his feet back underneath him."

"The coaches were probably more comfortable early on with Levi, but they were starting to split more reps and then Levi rolled his ankle and he jumped in there," Beane explained. "He was a former first-round pick. His biggest issue for his career has been durability. It's not been that he couldn't play the game. He played like 33 percent or something like that. He'll still have to go out and prove, whether it's playing with us and winning a starting job, or if he goes out to another team, I'm sure he's going to want to prove 'I can play even more than 33 percent of snaps.' It's something he'll have to answer. Until you do it, that's always a question."

"We’re very familiar with Josh," says Beane. “We had some great years with him. I remember the day we drafted him and where he grew from."

“If it's a guy that fits what you need – whatever the hole is – and he fits our DNA, it's nice to have a box checked off,” Beane expressed. “OK, this was a need that we needed to address in free agency, and we got it now. I’m definitely monitoring that."

“It keeps you from having to necessarily chase when the dollars start getting high in free agency,” Beane goes on to say. “You're generally going to spend on the edge of where you're comfortable or maybe even slightly above in free agency if you're chasing guys that five, six other teams are after.”