Over the long Labor Day weekend, many NFL teams were hard at work finalizing their 53-man rosters prior to the start of the 2019-2020 season. Two of these franchises were the Houston Texans and the Seattle Seahawks as they worked out a blockbuster trade in the National Football League.

The Texans traded the superstar pass rushing defensive end, Jadeveon Clowney, to the Seattle Seahawks for a third-round pick in the 2020 NFL draft along with DE/OLB Barkevious Mingo and LB Jacob Martin. Clowney signed the franchise tender that he was unwilling to sign as he was holding out with the Texans in order to complete the trade. The Seahawks promised not to franchise tag Jadeveon after this season as part of this new deal. 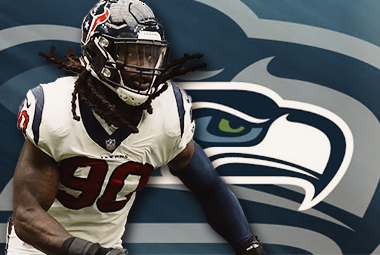 The Seattle Seahawks signed defensive end, Ezekiel Ansah, over the offseason in order to account for losing their star pass rusher, Frank Clark, who was dealt to the Kansas City Chiefs several months ago. Seattle’s defensive tackle, Jarran Reed, had his best year last season with a career high in sacks with 10.5 will be suspended for the first 6 games of the 2019-2020 NFL season.

Pro Bowl safety, Earl Thomas, left Seattle in free agency as well, and he was signed by the Baltimore Ravens. Clowney will definitely help beef up the Seahawks defensive line this year, and he should make an immediate impact upon Seattle’s defense.

Clowney’s health has often been one of the main factors that have defined him as a football player. The first overall selection of the 2014 NFL draft out of the University of South Carolina spent the beginning of his professional football career sidelined due to injury. He missed 15 games in his first 2 NFL seasons because of knee injuries.

During the 2016 season, he fought through elbow and wrist injuries to play in 14 games as well as making his first Pro Bowl. Ever since then, he has only missed one game and made the Pro Bowl over the last two seasons. So, when healthy he is a Pro Bowl defensive end as he has made it to that elite level for 3 consecutive years.

Last year while playing with the Houston Texans, Clowney recorded 47 tackles, 9 sacks, a forced fumble, and a fumble recovery. He had 16 tackles for a loss as well. His 53 tackles for a loss over the past 3 years puts him at third in the NFL over that time. In other words, Jadeveon is a great player when healthy, and the Seahawks are hoping he can remain healthy and on the field for them this season. If he does so I believe the Seattle team will look to sign him to a big contract next offseason.

"It's a big move for us," teammate Duane Brown explained. "He is a game-changer in my opinion. Just spending time with him in Houston, I know he is respected by offensive coordinators, guys that have to prepare for him. I think he will really thrive for us. I know Clowney has to get a physical, but he's excited. I've been telling him it's a reputable organization here. I'm not sure why it all fell apart in Houston. I know how he works. I'm looking forward to getting him out there with us now."

"He's a rare football player," says Seahawk’s head coach, Pete Carroll. "He's got special skills that most guys just don't have. It's great quickness, his reaction time, the length that he can use, his ability to run, his instincts. He's made a lot of plays in the backfield over the years, instinctive plays, penetrating and causing problems, and we plan to allow him to do that in our scheme. It'll fit really well with what we're doing. We saw a great fit whether it's third down or early downs. So he's pretty much got what you're looking for."

"He was like, 'You need to come play with us. You'll love it here. Great weather. It's not hot like Houston. Great fan support. Other great teammates on this team. Come be a part of something great,'" Clowney stated about what Brown told him. "I was like, 'Man, you know what? I'm going to look into that, try to get up there with you guys.'"

"I just really tried to take control of what I could control, as far as where could I play at and how could I be traded, as far as that," Clowney exclaimed. "I was just taking that into consideration. It was like, 'If I don't sign the tag, maybe I could decide where I end up going,' and I got somewhere I wanted to be. That's what happened."

"Without question, Duane helped us through the process in making us know who we're dealing with and the player he used to practice against and his capabilities, potential habits, background, family," says Carroll. "We really had a lot of insights because of Duane."

"There was about 20 seconds before 1 o'clock [Sunday]," Carroll explained. "It was right to the nub. We're a long ways away from Houston, and a lot of stuff could happen in between, and really, we're all sitting in the office up there. J.D. is there and his agent and Matt and John and I, and we're sitting there looking at the clock, waiting for the word to come back. So it was really, there was a lot of drama to it. So it was fun that we were able to pull it off, and really, we didn't know right until the very end."

"I know that Jadeveon was really concerned about being ready for this season coming up," says Carroll. "He would tell you he put together the best offseason he's ever had. ... He was really healthy going through the process with the physical and all that kind of stuff, so he's in great shape in that regard. Everything is really positive."

"I don't think I decided that," Clowney stated. "They decided that. I didn't have no say-so in that. I just held the cards of where I end [up] playing at. They decided to get me out.

"But like I said, I'm thankful for the opportunity I had in Houston. They drafted me No. 1 overall. Great opportunities down there. I met some great guys on that staff and great, great teammates. I'm just glad to be part of this team now. I'm just trying to look forward. I ain't looking back."