The newly acquired Jacksonville Jaguars quarterback, Nick Foles, had a very misfortunate first game with his new team on Sunday, September 8th, 2019. Early on in their week one game against the Kansas City Chiefs, Foles was injured on a 35-yard touchdown pass play to DJ Clark for the Jags. 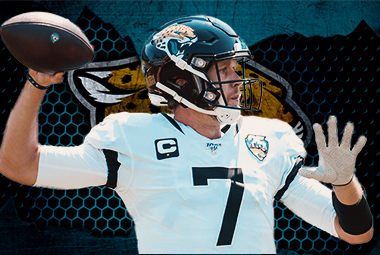 During the above-mentioned play for Jacksonville’s offense, Foles was crushed into the field by the defensive lineman of the Chiefs, Chris Jones. He left the game immediately following that hit, and x-rays revealed the former Super Bowl MVP broke his clavicle (collarbone). The play caller for the Jaguars returned to the sideline wearing a sling on his arm as he had to miss the remainder of the football game.

Jacksonville’s Back Up Quarterback Situation

After Foles went down last Sunday, the Jacksonville Jaguars’ back up QB, Gardner Minshew, filled in phenomenally. He happens to be a rookie who was selected in the sixth round of the 2019 NFL draft, and he had an amazing record setting game. The youngster completed 22 of his 25 passes for 275 yards, 2 touchdowns, and an interception that deflected off of his target Leonard Fournette’s hands. The Kansas City Chiefs ended up beating the Jags by the final score of 40-26 in the opener for both teams last weekend.

Once Foles was placed on the injured reserve list on Monday, September 9th, 2019 the Jags traded a 5th round pick in the 2020 NFL draft to Pittsburgh for their quarterback Josh Dobbs who was drafted in the 4th round in 2017 out of the University of Tennessee by the Steelers. Dobbs will now be the back up for Minshew, and it appears that the earliest that Foles will return to NFL game action could be week 10 of the 2019-2020 season against the Indianapolis Colts.

Minshew and the Jaguars will face the Houston Texans this upcoming Sunday (9/15/2019), and they look to hopefully improve to 1-1 without the services of Foles running the offense on the field. Foles will need surgery to repair the broken collarbone, and he is optimistic that he can return at full strength later in the 2019-2020 NFL season.

"We look forward to him coming back, obviously when that opportunity presents itself," head coach of the Jacksonville Jaguars, Doug Marrone, stated. "I know that he wants to be heavily involved with the quarterback room and helping Gardner. Shoot, he said that during the game yesterday. He wanted to come back out [on the sideline] and be able to help.

"We don't have a time span," Foles responded. "We're going to take it one day at a time, just get the surgery done. ... I'm going to do everything I can to get back as quickly as I can so we're ready to roll."

"I knew right when I hit the ground that something was wrong," Foles explained. "I felt it. ... All I saw was two red jerseys in my face, I hit the ground and heard a crack. Going into the sidelines and getting checked ... I just saw the play for the first time before I came in here. It's unfortunate, but at the same time I'm trusting the good Lord."

"Obviously it's unfortunate," says Marrone. "Really liked to see how the game would've played out or worked itself out. With Nick, what I've been told is he broke his left collarbone. I don't know the time frame. I'm sure you guys can look it up to see what the average broken collarbone is."

"It's not the way you want to start your time here," Foles remarked. "Sometimes things don't happen like we expect them to, but we just have to have faith that it's for a reason."

As a Jaguars fan, losing Foles on his 11th snap of the season came as quite a blow. However, I think they have more to worry about than just not having Nick Foles for the next 8 games. Their O-line is inconsistent and in constant flux. Their defense, although it features some really good players, is not all on the same page, and at times, loses their heads -- see Myles Jack last week.

If their O-line can solidify, their defense can keep their heads in the game, and Minshew can keep performing like he did against KC, they will do well, but that's a lot of ifs.

BTW, anyone else think Gardner Minshew looks an awful lot like White Goodman From the Dodgeball movie?