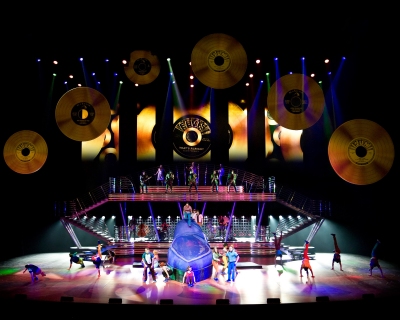 One of the most frequent - and least meaningful - catchphrases of our era goes, "It is what it is." However, when applied to the song catalogue recorded by Elvis Presley, it does mean something. An Elvis song requires no exegesis.

While the music of The Beatles, at least in their middle and late periods, offers enough psychedelia and intellectual ambition to become a logical springboard for Cirque du Soleil's Love, Elvis' music - including some of the most stone rock 'n roll ever uttered - provides no such subtexutal trampoline. It's what is.

Which is why Cirque's new Viva Elvis is less of grand jeté and more like an ignominous bellyflop. It also provides the off-putting spectacle of a slumming Cirque, ostentatiously "playing down" to both Presley and its audience. It's a show not only short on ideas but surprisingly maladroit in its stagecraft. Even the show's logo, which looks like nothing so much as an old K-Tel LP cover, suggests that - confronted with Elvis - Cirque suffered an epic failure of imagination.

A camel, the saying goes, is a horse designed by a committee. The misshapen beast called Viva Elvis represents the input of one writer/director/choreographer (Vincent Paterson), five co-choreographers, two "artistic guides," two "artistic directors," a musical director and a "director of creation." And, sure enough, it looks like somebody - a lot of somebodies - second-guessed the bejeesus out of thing.

Even after lengthy delays - the premiere was pushed back at least five weeks - the outcome resembles an attempt at a Broadway-friendly "jukebox musical" that ran out of time and was flung onto the stage in unfinished form. How else to explain the awkward and random intervals at which an actor representing Col. Tom Parker (Junior Case) ambles out to utter some transitional exposition, some of which is literally cut and pasted right out of the program?

Parker is here represented as a jolly, Humpty-Dumpty figure whose bland utterances are coated in faux-homespun locutions and do-it-yourself Freudian analysis. (Most Cirque shows' "dialogue" consists of deliberately meaningless gibberish. Considering how flummoxed it is by the English language, Cirque might be well advised to revert to baby talk.) Not only is it dreadful stuff - "He was a shy, simple country boy who dared to dream" - it's a collation of the most obvious and shopworn clichés and sounds like a desperation measure to paper over places where Paterson couldn't otherwise get from Point A to Point B.

It's difficult to know exactly where to place the blame for this fiasco. Was Aria's sound system - like a rinky-dink record player with the bass turned way up - to blame for the frequently indecipherable gurgle that passes for "music." Or was it musician-in-chief Erich Van Tourneau's mixage of genuine Presley recordings, live vocals and instrumentals, and sundry pre-recorded elements that was the culprit? Or both? Jennlee Swallow may be delivering one badass rendition of "King Creole" but all we hear is an garbled screech of warring musical elements. Is the band as feeble as it sounded when the amplifiers suddenly cut out on opening night? Or is Aria's showroom an acoustical failure? Again, no easy answers present themselves.

Van Tourneau's overgrown soundscape is a metaphor for Viva Elvis itself: Throw everything against the wall (or, in this case, the audience's ears) and see what sticks. If there's a whiff of condescension about his contribution, it thickens into a visual stench when the effete, camp-ridden costuming of Stefano Canulli and the lumbering, overbearing sets of Mark Fisher lurch into view.

For instance, some may find it whimsical to see the American flag represented as a field of long johns with 48 boxer-shorts "stars" while others will sense a lack of taste. There are bits of sub-Robert Wilson visual poetry, as when Col. Parker flies across the stage atop a TV set. However, the prevalent aesthetic is More Is More. So literal-minded is Viva Elvis that "Blue Suede Shoes" is staged around an - oh, this must have required much heavy thinking - oversized blue shoe. Remember the slide at the playground? Yeah, it works like that, only it's far uglier - and missed its cue on opening night.

"Mystery Train" puts us Somewhere Out West, where a phalanx of oversized Elvis-as-gunslinger cutouts recede toward the horizon. Lord knows how, but Paterson has equated Presley's Western movies with cowpoke clowns doing lasso tricks. All the while, around them caper six women in milk-cow skirts. Except they're wearing … horns? So they're … steers? Transgendered cows? What?

That's possibly even more off-kilter than the gonzo staging of "Jailhouse Rock" as a portentous condemnation of the penal system … except that its setting seems more madhouse than jailhouse. Is Cirque trying to confess that Viva Elvis has descended into bedlam? Or is this just another unwitting metaphor of a production that's gone cuckoo?

Since the show was produced under the watchful eye - and stern hand - of Priscilla Presley, we are given an idealized version of their marriage. (In this narrative, Elvis life basically ends with his opening night at the International, beginning the Elvis-in-Vegas era.) But what did the widow make of the depiction of their wedding night as a ménage-a-quatre, with two couples copulating in gargantuan airborne versions of the Presleys' wedding rings?

After a few more a priori declarations by jolly Col. Parker, it's on the multi-song grand finale. The intent is clearly to finish the show with a Mamma Mia!-style megamix, with "Hound Dog" in place of "Waterloo." What we get is a logjam, as Paterson tries to cram every available element (plus showgirls) onto the set. By now, most of the dancers are costumed and wigged out as Day Glo-garish versions of Elvis. "We are all Elvis," the show seems to be trying to proclaim. "He is everywhere! Get in touch with your inner Elvis!" (Methinks Cirque needs to get in touch with a "show doctor," but never mind.)

Sometimes basic competence is lacking. The staging of "Love Me Tender" relies upon a gargantuan projection screen, hard upon the footlights. Trouble is, Viva Elvis is staged in a modified-thrust configuration (no pun intended), meaning that spectators to the left and right of the screen will be looking at it from as much as a 90-degree angle. Did Fisher skip class the day they taught "vanishing points" in Scene Design 101?

The show curtain - a polka-dot pattern of Sun Records and RCA 45s - is one of the more restrained visuals of the night. In place of the usual epicene pre-show clowning, Cirque has deployed a small army of mock-bobby soxers who try to work the audience into a manufactured frenzy to equal their own. It's corny and portends everything bad thing that will follow.

The unkempt, hot-dogging house band is an even greater offender. Apparently this scruffy bunch didn't get the memo that they're not the stars of the show. Elvis might have enjoyed their "Look at me!" showboating but their just-out-of-detox appearance wouldn't have passed muster … not to mention that everybody else in the show is conspicuously clean-cut, making the instrumentalists look even more obtrusive. Perhaps they thought this gig was Saturday Night Live and hammed it up accordingly.

The most unenviable task falls to the vocalists. Any show that requires you to offer your interpretation of, say, "All Shook Up," in direct comparison to The King is putting you in a no-win situation. Some numbers have live vocals, some don't. Some are aggressively rearranged, some aren't and it often seems quite arbitrary. Cirque needed to go whole-hog with either all-Presley or all-covers but settled for uneasy half-and-half compromise.

While the choreography is undistinguished, especially by Vegas standards, the dancers work it like there's no tomorrow. The women are comely and appealing but the men have a strange, waxen appearance. They could do without the competition posed by the aggressive video barrages (extremely well done but sometimes overpowering) that are nearly unrelenting during the show. For instance, a processional dance that provides a welcome moment of quietude following the (stylized) death of Elvis' twin brother, but the video screen upstages it.

Of that death, Viva Elvis tries to make much, with lines like, "It seems like Elvis was trying to live enough for two men" or something comparably groan-inducing. But Jesse Garon Presley died at birth and Viva Elvis represents the duo as two grown men in matching blue jeans and muscle shirts, flipping around on a Big Phallic Symbol in the Sky, er, giant and airborne guitar. (A visual pun on "air guitar"?) They don't even act like they know each other until the end of the routine. Too late! Worse still, if you don't read the fine print in the program book, you'll get the impression Jesse killed himself.

It's all very odd and indescribably bad. Cirque's Criss Angel vehicle, Believe, is said to be far worse, which is a truly frightening thought to contemplate.

Some of Elvis' recordings - and most of his movies -- are gooey or flirt with self-parody. But they never lack a sense of fun - and fun is what the burdensomely grim Viva Elvis sorely lacks. You'd be better off staying home and renting Spinout or G.I. Blues … and those are some of his worse flicks!

Viva Elvis leaves you feeling like you know even less about The King than you did going in. Elvis hasn't left this building. He was never here.