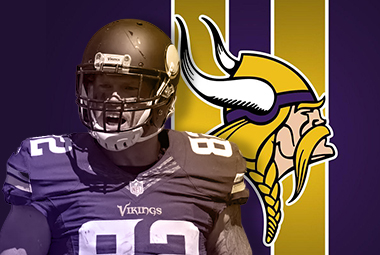 On Tuesday, June 11th, 2019 the Minnesota Vikings and the veteran tight-end, Kyle Rudolph, come to agreement on a contract extension. This new deal is a 4-year extension worth $36 million. The Cincinnati native has played his entire NFL career with the Vikings.

Rudolph’s previous contract extension was signed on July 27th, 2014. That deal was a 5-year agreement worth $36.5 million. It is quite obvious that the tight end loves being in Minnesota, and he would like to play there for the remainder of his football days. If he rides out the entirety of his new contract, he will be wearing the purple and gold through the 2023-2024 NFL season.

Rudolph was selected to the NFL Pro Bowl twice (2012, 2017). He played really well in the 2012 Pro Bowl earning him the Most Valuable Player Award (MVP) of that game. The veteran tight end has helped his team make the playoffs three times (2012, 2015, 2017). He is working on trying to bring the Minnesota Vikings their first championship as he often discusses that goal in his commentary with the media.

"It was extremely important to my wife, Jordan, and me," says Rudolph. "Quite frankly, our only objective in this was to stay here in Minnesota. This is home for us. We want to stay here. We know how important it is to this fan base and the state of Minnesota to bring that first championship here, and now my sole focus is on that -- just playing my roles on this team to the best of my ability and going out and trying to lead this team to a championship."

"It's exciting," says Rudolph about regular multiple tight end sets in the Viking’s offense. "It's something, an element that we've never had here in my nine years being here. It forces defenses to play with three linebackers, and that allows us to control the game, when we go out there in three-wide sets. People always talk about creating mismatches -- well, now they have five DBs on the field, and yeah, there's still mismatches, there's size mismatches, but now we can kind of control and do things how we want to do them."