On Wednesday, November 20th, 2019 the Minnesota Vikings all time leading scorer, legendary kicker, and the inventor of the Nerf football, Fred Cox, sadly passed away at the age of 80 years old. He will forever be remembered as a highly intuitive football player, record setting kicker in the National Football League, and more importantly a great person. 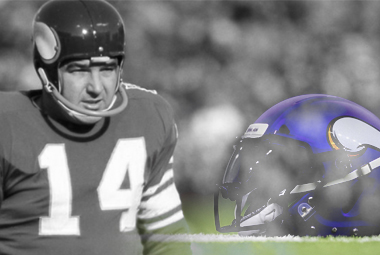 Frederick William Cox was born on December 11th, 1938 in Monongahela, Pennsylvania where he was raised by his parents that made a living operating a small grocery store which so happens to still be operated by his brother’s family (4 generations later). Fred attended the University of Pittsburgh (Pitt) where he played his collegiate football.

Cox went on to have an incredibly successful career in the National Football League as the place kicker for the Minnesota Vikings from 1963 to 1977. He is the Vikings all time scoring leader having racked up 1,365 points over his fifteen seasons playing in the NFL. Cox led Minnesota in field goals as well with 282. Fred is one of only 11 players to participate in all 4 of the Minnesota Viking’s Super Bowl appearances throughout the 1970’s. Unfortunately the Minnesota Vikings lost all four of those Super Bowls.

The legendary kicker became an NFL champion in 1969 with the Vikings, and he was named to the NFL Pro Bowl in 1970. Cox led the National Football League in scoring during the 1969 season with 121 points and then repeated that accomplishments again in 1970 with 125 points. Fred Cox was named to the illustrious All Pro First Team in 1969 and 1970.

He was elected to the NFC First Team All Pro in 1971 while putting up 91 points in that season. When Cox retired following the 1977 season, he was the NFL’s second all time leading scorer with an astonishing 1,365 points behind only the great George Blanda. However, Blanda somehow managed to play professional football from 1949 to 1975 as both a quarterback and a place kicker.

The legendary kicker was able to comfortably hang up his cleats for good in 1977 as Fred Cox and his business partner John Mattox invented the Nerf Football in 1972. The Nerf football was a huge success in which Fred Cox and his family still profits to this day via that genius invention from the 1970’s. Following his NFL career, he also became a licensed chiropractor as he maintained that practice in Buffalo, Minnesota.

From the people who knew him best he has been described as an intellectual individual who everyone wanted to be around. He had an outstanding reputation for being a great person overall. Fred Cox will be forever remembered and missed by many.

"The Vikings mourn the loss of Fred Cox, one of our proudest legends and a member of the 50 Greatest Vikings," says the Minnesota Vikings in a statement released by the organization. "A respected teammate and friend, Fred's football career as the Vikings all-time leading scorer set the stage for a life where he went on to achieve great things in business and in his community. Fred's positive energy, strength in his faith and passion for life will be missed."

"The weight was right," Cox said about the Nerf football. "When you threw it, it flew like a football."

"He had a great brain and was a great thinker," Fran Tarkenton remembers. "He was an intellect that I spent every morning with before we played a game. I spent more time with him than any other player. Fred was a special, special human being who will be missed."

“Fred was the ultimate team player for us,” former Minnesota Vikings head coach, Bud Grant, stated. “He took part in all of our scout teams, playing running back or whatever we asked of him. He was a great asset to our team, a true credit to the team and his community. If you saw those games, he always stood right next to me on the sideline because he was such a big part of what we were doing with field position and knew the game so well.”