Derrick Henry Gets 4 Years $50 Million from the Tennessee Titans

On Wednesday, July 15th, 2020 the Tennessee Titans signed their superstar running back, Derrick Henry, to a four-year $50 million contract. Previous to this deal Henry was slapped with the franchise tag by the Tennessee Titans earlier this offseason of the National Football League. 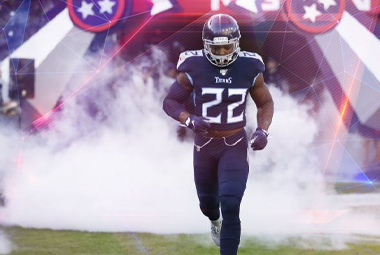 The hard-nosed running tailback, Henry, is now scheduled to earn $50 million over the course of the next four football seasons in the National Football League. He was guaranteed $12 million at the time of signing his new deal with the Tennessee Titans, and he is now set to take in $25,500,000.00 in total guaranteed money over the life of this new contract. Derrick will become an unrestricted free agent following the 2023 – 2024 NFL season.

"Appreciate everybody for all the love today & the fans through the whole process," Henry posted on Instagram on July 15th, 2020.

Born as raised in Yulee, Florida Henry played high school football for the Yulee High School Hornets. He set the national high school record for the most career rushing yards with the YHS Hornets. Derrick decided to play his collegiate football at the University of Alabama in Tuscaloosa, AL.

He dominated on very strong teams under head coach Nick Saban at Alabama helping the Crimson Tide win the NCAA College Football Playoffs National Championship in 2015. Henry also won the elusive and best college football honors by winning the Heisman Trophy in 2015 as well. He was selected with the 45th overall pick in the second round of the 2016 NFL draft by the Tennessee Titans.

Throughout his illustrious career in the National Football League, Henry was selected to represent the Tennessee Titans in the 2019 NFL Pro Bowl. He was named to the NFL’s Second Team All Pro in 2019 as he led the National Football League in both total rushing yards as well as total touchdowns last season. Henry also led the young and underestimated Tennessee Titans of the AFC South to the AFC championship game where the Titans ultimately lost to the eventual Super Bowl LIV champion Kansas City Chiefs.

The Tennessee Titans are hoping to stay in contention by first resigning Ryan Tannehill to a semi long term deal followed up by this new signing of Derrick Henry in order to keep the core components of the Tennessee Titans offense intact for the next four upcoming seasons in the National Football League. Hopefully both Tannehill and Henry stay healthy and continue bringing big market success to a small market NFL franchise like the Tennessee Titans.

"I've said it before, I'll say it again: Derrick is an important part of what we do. Derrick is an important part of our football team," the Tennessee Titans general manager Jon Robinson stated during the 2020 NFL scouting combine last March. "Derrick had a great year for us. He led the league in rushing and built off of the second half of his 2018 season. He cares about his teammates and works hard, and he's great in the community."

"His leadership ability improved. He became a leader," the Tennessee Titans head coach Mike Vrabel said following the Tennessee Titans' 20 to 13 postseason win over the New England Patriots last season. "I think he helped lead this football team and carried my message and our staff's message into the locker room. His durability, effort and toughness allow him to be a leader. He was excited and talked to guys on the field and locker room, and they listened."