On Sunday, January 19th, 2020 the Kansas City Chiefs faced off against the Tennessee Titans in the AFC championship game from Arrowhead Stadium in Kansas City, Missouri. The winner of this exciting and highly anticipated match up would represent the AFC in Super Bowl LIV which will be played on Sunday, February 2nd, 2020 at Hard Rock Stadium in Miami Gardens, Florida. 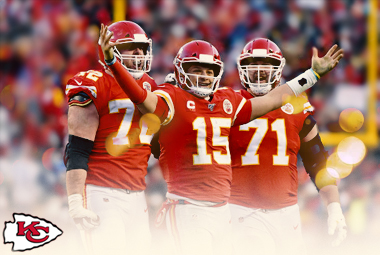 The Tennessee Titans wasted little time getting on the board first in this contest. Greg Joseph nailed a 30 yard field goal capping off an 8 play 58 yard drive which put the Titans up 3 to 0. Tennessee followed that up with 9 play and another 58 yard drive that concluded with a 4 yard touchdown run by Derrick Henry. The Kansas City Chiefs punched back with an 8 yard touchdown pass from quarterback Patrick Mahomes to his speedy wide receiver Tyreek Hill. This score put the Chiefs on the board as the Titans lead the game 10 to 7 at the end of the first quarter.

Titans quarterback Ryan Tannehill then found his offensive tackle, Dennis Kelly, in the endzone for a 1 yard touchdown pass early on in the second quarter. With the score now at 17 to 7 Tennessee was looking like they were in excellent shape to possibly beat the favored Chiefs on the road, but we all know how Kansas City’s explosive offensive can score in flurries to get back into football games.

Mahomes connected with Hill again, this time on a 20-yard touchdown reception. Then right before halftime the star quarterback of the Chiefs, Mahomes, escaped pressure and tight roped the side line down the field eventually breaking tackles and spinning into the end zone for an amazing 27 yard touchdown run. Kansas City took the lead 21 to 17 as both teams entered the locker room for half time.

Unfortunately, neither team was able to score during the third quarter, but that drought ended once they entered the fourth and final quarter of the game. The Kansas City Chiefs struck first in the fourth on a 3 yard touchdown run by Damien Williams after a long 13 play 73 yard drive that ate up more than 7 minutes of game clock. The score was now at 28 to 17 in favor of the Chiefs.

Last season’s MVP, Mahomes, showed off his impressive arm strength by finding Sammy Watkins on a bomb resulting in a 60 yard touchdown reception. The Titans fought back with Ryan Tannehill throwing a 22 yard touchdown pass to Anthony Firkser. The score was now Kansas City 35 and Tennessee 24. The Chiefs locked down on defense the remainder of the match up stopping the Titans when it counted most. The Chiefs won the AFC championship game with the final score of 35 to 24, and they advanced to Super Bowl LIV where they will face the San Francisco 49ers for the NFL title.

This 2019 – 2020 NFL season that culminated in a Super Bowl appearance for the Kansas City Chiefs marks the 50th anniversary of their last Super Bowl appearance. On January 11th, 1970 the Kansas City Chiefs defeated the Minnesota Vikings 23 to 7 in Super Bowl IV at Tulane Stadium in New Orleans, Louisiana. Star quarterback of the Chiefs, Len Dawson, was named the Super Bowl IV MVP. In 1967 the Chiefs lost to the Green Bay Packers 35 to 10 in the first AFL vs NFL Championship Game which was labeled Super Bowl I by Chiefs owner Lamar Hunt. Kansas City won the AFL championship in 1962, 1966, and 1969 as well.

"I mean, it's amazing. It really is," Mahomes stated after his amazing 294 yards passing and three touchdown game. "To be here, to be a part of Chiefs Kingdom and to be able to do it here at Arrowhead, these people deserve it. And we're not done yet."

"Very excited and very emotional to win the trophy that has my dad's name on it," says owner of the Kansas City Chiefs Clark Hunt. "Yeah, 50 years were too long, but we're going to another Super Bowl.

"Chiefs Kingdom, we are going to the Super Bowl."

Reid expressed, "It's awesome," then asked the crowd to chant, "How about those Chiefs?"

Starting tight end of the Chiefs Travis Kelce said, "You gotta fight for your right to party."

"Fired up to go to Miami, got to get on a diet so I can fit into my clothes," says Reid. "Very proud."

"They were doubling all these guys," Mahomes explained referring to his electric touchdown run at the end of the first half. "I just ran it and got some good blocking at the end and found a way to get in the end zone."

"I feel like our backs were against the wall the whole season," Tennessee Titans running back Derrick Henry proclaimed. "But we kept on fighting and kept on believing in each other. I think it speaks volumes about the team we have. We just came up short."

"So much effort that went into this," Reid says. "It takes an army, it is not one guy at all. I appreciate the effort by everybody."