After being cut last week by the Arizona Cardinals, Terrell Suggs was initially saying that he only wanted to be claimed and reunited with his former team in the Baltimore Ravens. In fact, he had mentioned that he would not report to any other team that tried to pick him up.

With all that said he seems to be showing great interest in the team that actually did claim him off of waivers this week in the Kansas City Chiefs. Apparently, the veteran defensive end just wanted to go to a team that has high expectations to compete for a Super Bowl championship this season.

His beloved Baltimore Ravens had the lowest waiver claim so it was highly unlikely that Suggs would end up there, but there were some pretty great contending teams that did submit claims to get the former defensive player of the year. The New Orleans Saints, the San Francisco 49ers, and the Seattle Seahawks all tried to acquire Terrell, but because Kansas City had the worst record out of that group of teams at the time the Chiefs were able to claim him. 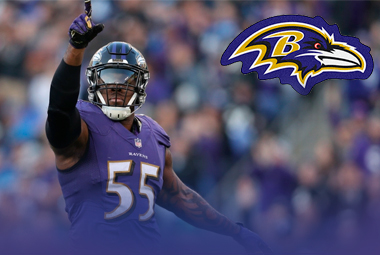 For those of you who don’t know who ‘T Sizzle’ is, please allow me to introduce you. The Baltimore Ravens selected Terrell Suggs tenth overall in the 2003 NFL draft out of Arizona State, and he had an immediate impact on the National Football League. This aggressive defensive end came into the league a man as he took little time to start tearing up the offensive schemes of opposing teams. The blitz intensive stacked Baltimore Ravens defense was a perfect spot for Suggs to land and thrive as a blood thirsty pass rusher.

Throughout his illustrious NFL career Terrell Suggs has currently accumulated 883 tackles to go along with his 138.0 sacks. He has been quite disruptive with 60 pass deflections, and his turnover numbers are also quite impressive. Over his 17 years as a professional football player he has tallied 7 interceptions, forced 39 fumbles, recovered 13 fumbles, and has scored 3 defensive touchdowns.

In his college days he was awarded the Ted Hendricks Award, the Lombardi Award, and the Bronko Nagurski Trophy. Suggs was a unanimous All American, Pac 10 Defensive player of the year, First Team All Pac 10, Pac 10 Freshman of the year, and he holds the NCAA record with 24 sacks in a season.

Although Terrell Suggs may be past his prime, I still believe he can contribute to a defensive package especially like the one he lines up with from now on in Kansas City. The Chiefs aren’t expecting him to completely blow things up, but I bet he comes up with at least one very timely sack over the last two weeks of the regular season or in the playoffs. He sounds eager to compete as he was most likely far from happy spending this last year with the Arizona Cardinals who are far from championship material. Hopefully once he does decide to finally retire it won’t take long until he is enshrined in the Pro Football Hall of Fame in Canton, Ohio.

"I was really uncertain about my future last week, but I talked to Coach and it was a brief conversation and I was like, 'OK,''' Suggs stated last Wednesday once he joined the Kansas City Chiefs for his first practice with his new team. "I asked Coach, 'I just learned the hard way that a player like me just [doesn't] fit in anywhere.' He was like, 'Trust me, you'll fit in here.'

"It's hard to turn down [playing with] the reigning MVP [Patrick Mahomes] and a playoff team and just the exciting things they're doing, this atmosphere.''

"You've got to make sure he can still play,'' says the Chiefs head coach Andy Reid. "That's important. And then, how do they fit in your locker room? We've got a good locker room and a strong locker room. We have some very good leaders in this team, so how do they fit into that? You don't want to bring somebody in that's going to disrupt things. That's not where we're at right now.''

"He's not familiar with this, so did I tell him about what's going on here and did he want to hear it?'' Reid explained. "Sure. He wanted to know what was going on. He's a thorough guy. But did I have to put the hammer down on him or anything? No. He had some questions, which guys do when they've been around. I think he liked what he heard. It wasn't a recruiting-type situation.''

"Hopefully I can come in and contribute right off the bat,'' Suggs exclaimed. "This was a team that was a penalty away from the Super Bowl last year, so they're not missing much. Hopefully I can add that extra addition that we can kind of potentially do something special.''