On this date in sports history (August 27th, 1982), Rickey Henderson, of the Oakland Athletics, surpassed Lou Brock to earn the record for most stolen bases in a season with 119. That legendary steal came against Milwaukee Brewer’s pitcher, Doc Medich, and catcher, Ted Simmons. Henderson went on to steal 130 bases throughout the 1982 season which still stands as the current record for the most stolen bases over the course of a single season. 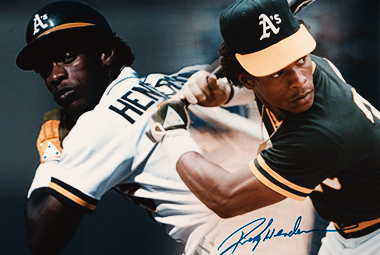 The amazing and speedy outfielder also owns the record for most career stolen bases in Major League Baseball history with 1,406. He got on base quite a bit during his 25 year MLB career. He has the second most walks in MLB history with 2,190 behind Barry Bonds who has recorded 2,558 base on balls throughout his legendary career. Henderson got on base 5,343 times in his career and by having 1,406 stolen bases that means he stole a base an unbelievable 26.3% percent of the time he made it aboard on average.

This was an exciting time in my life as a fan of the Oakland A's. Billy Martin was directing the team to do things rarely seen in baseball, including letting Henderson run free. He certainly had the talent to steal bases, but with the A's having below-average hitting talent, Martin give Rickey the perfect atmosphere to attain record-breaking numbers.