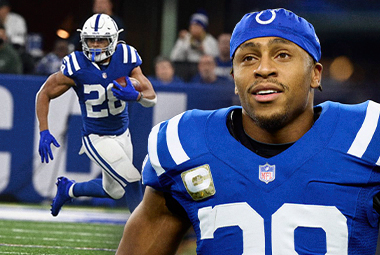 During last week’s historic football game between the Indianapolis Colts and the Minnesota Vikings, Taylor had to exit the match - up following him suffering an ankle injury during just the 1st - series of the game.

Throughout the course of the 2022 - 2023 regular - season of the National Football League, Taylor has compiled a total of 861 - rushing yards stemming from his 192 - rushing attempts in the 11 - NFL games that Jonathan has played in this year. Taylor also has found the endzone a total of 4 - times for touchdowns which were all on running plays by Jonathan. During the 2022 - 2023 NFL season, Taylor’s yards per rushing attempt computes to 4.5 Y / A.