On Wednesday, December 22nd, 2021 the Las Vegas Raiders football team announced that their aggressive, sure – tackling, and hard – hitting strong safety, Johnathan Abram, suffered a serious left shoulder injury last week on Monday Night Football against the Cleveland Browns. It has been confirmed that the shoulder injury that Abram endured will require season – ending surgery in order to repair the damage that has been done to his left shoulder.

The Las Vegas Raiders did eventually win their Monday Night Football game versus the Cleveland Browns with a final score of 16 to 14. This victory for the Las Vegas Raiders helped keep their chances of making the 2021 – 2022 NFL Playoffs alive for now. 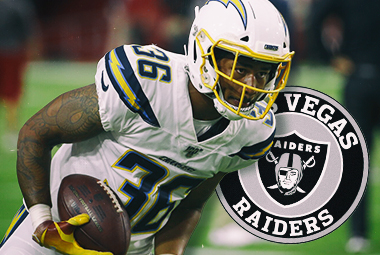 Johnathan injured his left shoulder late in that game last week, and once he had to leave the contest Abram was replaced by Roderic Teamer at his standard strong safety position within the defensive unit of the Las Vegas Raiders. As long as Teamer is healthy and eligible to play football, he should be permanently replacing Abram for the remainder of the 2021 – 2022 NFL season.

The Las Vegas Raiders final 3 – games of the 2021 – 2022 NFL regular season are going to be against the 7 and 7 Denver Broncos, at the 8 and 6 Indianapolis Colts, and finally against the 8 and 6 Los Angeles Chargers. Currently the Las Vegas Raiders have compiled an overall record of 7 and 7 so far this year, and they are presently sitting in 3rd – place in the highly – competitive AFC West division of the NFL.

NFL Standings in the AFC West Division of the NFL

The 3rd of the then Oakland Raiders' 3 – 1st – round – picks from back in the 2019 NFL Draft Abram was taken with the 27th – overall pick right in back of the defensive end, Clelin Ferrell, who was taken with the 4th – overall selection, and at the running back position the Oakland Raiders decided on Josh Jacobs with the 24th – overall draft pick in the 2019 NFL Draft. Abram played only half of his rookie NFL season after he suffered a season - ending left shoulder injury during his initial debut in the National Football League.

Following a mostly down 2nd – season in the NFL, Abram greatly furthered his NFL career once the Raiders brought in their new defensive coordinator, Gus Bradley, and Johnathan began demonstrating his value as a safety by becoming a box safety that defended against the opposing offenses running game, but Abram continued to be a liability in deep pass coverage defensive schemes.