In a piece of gambling news coming out of Cleveland, former NFL Wide Receiver Reggie Rucker stands accused of wire fraud for defrauding his non-profit organizations to take out tens of thousands of dollars in cash advances from casinos and to pay off markers from at least one Las Vegas Casino.

I have written a full-length opinion Article on this matter and what the responsibility of the casino(s) in question should be given that they ALMOST DEFINITELY had reason to suspect that these funds were being fraudulently obtained.  Furthermore, I intend to follow this story pretty closely over the coming weeks and will post up any updates in a future News & Notes.

If you would like to read my source Article for this story, please follow the link below:

A couple visiting Las Vegas two weeks ago, Phillip Panzica and Chloe Scordianos, decided to take a leisurely ride on the Las Vegas High Roller Ferris Wheel.  However, they soon became bored and decided to remove their clothing while smoking cigarettes.  The attendant asked them to stop on the intercom and the couple initially complied.

However, a short time later, they again began disrobing and performing sexual acts upon one another.  The attendant again requested that they stop any such activity, though the couple did not comply with the requests on this occasion.  It has been reported by multiple news sources that another couple in a different car were able to see the acts being performed by Panzica and Scordianos and even began recording such acts on their cell phone.

The fall from Cloud Nine was a long one, all the way down to steel bars and a concrete floor as security and then the police detained the couple.  Amusingly enough, it seems that had the couple heeded either of the requests to discontinue their sexual conduct, they might not have been arrested. 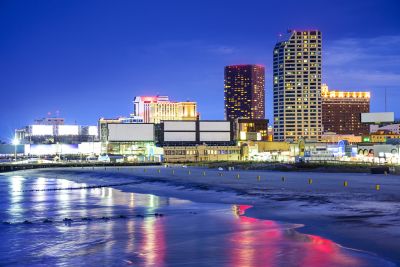 David McKee over at the Las Vegas Advisor has reported that Caesar's Bankruptcy might end by the end of this year, but it is difficult to say whether or not this will reinvigorate the brand to its once lofty heights.  One might think that bankruptcy would not influence where people go to gamble, but one look at the January Atlantic City Revenue Reports clearly indicates otherwise:

As you can see, Atlantic City on the whole had a gaming win of 3.8% less than the same month last year.  These losses were driven by four casinos with losses at or near double digits vs. four casinos who gained 6.6% or less.

So, who were the losers?

Surprisingly, Borgata was one of (but the smallest in terms of percentage) the losers.  Not so surprisingly, the three Atlantic City Caesar's Casinos were the other three losers, two of which lost to the tune of double-digits.

The brand might get out of bankruptcy, but will it ever fully recover?

Vegas Has the Worst Blackjack Weather...And The Best

Technically, this probably doesn't qualify as news, but I do want to give a shout-out to Blackjack genius and author Norm Wattenberger (board member QFit) for creating a fun and easy to use, "Weather Map," of Blackjack conditions on a State-By-State basis:

This tool enables the user to order states by number of casinos, average house edge, number of tables, percentage of Hit Soft 17 Tables and percentage of 6:5 Tables for any state in the country.

Overall, most especially due to the high percentage of 6:5 Blackjack tables that are unfortunately found on the Las Vegas Strip, Las Vegas wins the dubious distinction of having the highest House Edge on Blackjack in the entire country!  WooHoo!  Vegas, Baby!

Of course, on the level of individual casinos, (including some casinos with bad rules for lower limits and great rules for higher limits) some of the houses in Las Vegas still offer the best Blackjack rules in the country.

Anyway, I would say that Norm put a lot of work into making this map, so I would strongly suggest everyone take a few minutes to play around with it and enjoy it.  It's both a useful tool and fun to do.

What State has the best Blackjack Rules in the country?  Easy, Pennsylvania!  By way of Legislation, in fact, go Government Regulation!

This week's News & Notes is getting closed on the brightest note imaginable!

That vile and despicable, "Sport," known as greyhound racing could very soon be coming to an end in the State of West Virginia.  State Senator Chris Walters has proposed a bill (that is being taken up by the State Senate) to eliminate the 15 million dollars in annual subsidies that HELP support the greyhound racing industry.

This article is using the term, "Help Support," because greyhound racing still does not operate in an independently profitable way even including the annual fifteen million dollar subsidy.  Specifically, 95% of the purses paid out by greyhound racing are subsidized by way of having revenues derived by other forms of gambling at the applicable West Virginia casinos also go to greyhound racing.

In short, greyhound racing has not been terribly popular in a number of years and never will be again.  If the State of West Virginia eliminates these subsidies and no longer forces the casinos to divert revenue from other gambling areas to the greyhound tracks, then greyhound racing has absolutely no chance of survival in the Mountain State.

It is true that, over two decades ago, the greyhound tracks were authorized to build casinos and offer slot machines mostly due to a desire to prop up the greyhound racing industry.  Table games were later added to the West Virginia casino gambling repertoire.  In fact, in order to be licensed for a casino, it was required that a house either offer greyhound or horse racing with the notable exception of the private Greenbrier Resort.  The exception for the latter is due to the fact that one must either be a guest of the resort to access the casino, or pay for a one day pass, much like Lady Luck Casino at the Nemacolin Woodlands Resort in Pennsylvania.

Anyway, if this bill passes the Senate, it is absolutely OVER for the barbaric practice known as  greyhound racing.  Will the casinos take this ability to no longer have to divert revenues from its profitable gaming operations as a reason to introduce better rules into their games?  Probably not, but at least the comps might improve a little.

> one must either be a guest of the resort to access the casino,
>or pay for a one day pass, much like Lady Luck Casino.

You can be a guest, an attendee of an event if they have 400+ rooms booked, or a member of their sportsmen's club.

That's where I got confused. You can also pay for a yearly membership for access to LL Nemacolin.