I feel I should point out again that the games can be followed with an analyzer - otherwise these posts are just a bunch of drivel - nobody is going to try to replicate the game manually for somebody at my level. With an analyzer, it's available in a flash.

This is the first game I've won against the 1850 at level one - that doesnt mean I won against an 1850-rated player but something unknown, maybe 1100-1400 ? I insisted on the beginning move, e4 e5, otherwise it was rule-enforced including touching a piece. I can't remember if I took White out of book*

Improvement has come partly from being reminded of necessary precautions in play, such as examining the possible actions of each enemy piece each contemplated move, and the extra caution needed for pieces advanced to the 4th rank or beyond [which caused the embarrassing blunder in my first post in the thread]. It all sounds simple, but when I am rusty I don't have the discipline.

The computer never resigns, so I played it out to checkmate to make member Jbyrd happy LOL.

It occurs to me that I should not flatter myself to think anyone would be particularly interested in continuing to analyze my chess, or anyone else's at my level, so I will switch to blogging. It's what a blog is for I think. That's not to say I wouldn't be very happy to see any comments!

I won't repeat what I put in the thread,

except my last PGN posting, where I am starting to play a little better [thought I would win], but the Radio Shack 1850 shows again what it can do even at low levels.

I also take Jbyrd's advice and played out the first PGN I posted by switching sides at move 22. It probably is true there is something to be learned by switching sides instead of resigning in some cases. In this case, I blunder again at move 27 as Black [stupidly failing to realize the White Queen can take a pawn and prevent disaster by putting me in check], but Black [now me] wins in the end. It shows the 1850's weakness is the end game [bear in mind it's playing at level one here though]

Reserect's blog got me thinking.

Taking the Wizard's example for slot SD [8.74 see link] and assuming the the slot return is 93% [which I am guessing is fairly middlin'], and looking at 2 SDs of variance, I wanted to look at the multiple of EV this could be in Slots and compare it to Craps.

That's 7.6 times EV approximately; that same EV is about 13% of 2 SDs running bad, to look at it another way.

So I conclude that a Craps player sticking with low HE and high variance can look at his EV and have his real results run wildly off.

A Slots player, always stuck with high variance, still gets a better handle looking at EV, which is not to say running bad won't clobber him.

It's somewhat subjective to conclude this.

I am used to accepting 20-40 times EV with Craps in short sessions. For 3500 bets, however, that kind of variance will not hold up. In the case of slots, 20-40 times EV just isn't going to happen. So it is another indication that a player needs to go by standard deviation to get a handle on his 'swings'

*saved info from Alan Shank, our Goatcabin, however I can no longer find the post that says this.

disclaimer: I am perfectly capable of screwing up the above math.

Just started reading on page 1... Funny, I learned craps in Nasau, 2004. I managed to make about $800 on my first couple of nights after SCUBA diving. My cousin and I were just a couple hotels (+casino) down the beach from Atlantis. Found WoV just before my first trip to Vegas 2011(thankbabygezus!) I admire your honesty in making the decision to be "real" and not front an image of "I win all the time". I have taken a nose dive myself over the last 4 visits... but I still L-O-V-E craps.

currently I am running good! if that never happened, I'd give up Craps! still down lifetime, but not a lot.

Back to the Greenbrier part 3

Of course there was no way I wasnt going to play Craps when I have a chance.

Still 3x4x5x there, but $5 min is much more commonly available than before, at least during the week.

After having given it a lot of thought, I decided that I would try to make the transition from someone who has his free odds off during the come-out to someone who left them on. I was always the former player type for the usual reason, but also because I hadn't comfortably found a way to communicate the latter style to the dealer. It especially seemed kind of nuts to me to have to "train" each dealer in the rotation to do what I wanted. Finally it occurred to me that the thing to do is just be sure to say "always on, please" the very moment you give the chips to the dealer. What a simple expedient, yet it escaped me for the longest!

Well, "odds always on" sure adds excitement to the game. It is a real smack in the face when the dice do the nasty on you on the come-out and a real thrill when your number is hit instead. It's a good thing, though, that the Wizard has so confidently declared it is the thing to do, as I think it would otherwise be in the column of selective memory giving the wrong answer. In fact I think for the 2 sessions I played, I came out worse for the change in strategy. It makes such an impression though to lose those odds on the come-out that it's possible I broke about even and don't even know it.

One thing for sure, I couldn't seem to prosper with my come betting. The regular line bet worked out pretty good for me, but the come betting wasnt working. I broke even in the first long session, maybe 3 hours, but on the last session we had a lot of ladies shooting and I'm afraid I bought in heavy on the idea this would bring good luck. Instead we were treated to "girl can't catch a break" shooting. I took my beating cheerfully but the trend was finally too much for me and I colored up down $200 in a short 90 minute or so session.

I came away pretty convinced my new strategy was going to lower HE [as promised by the Wizard] while simultaneously increasing variance. Nice combination, but I got to experience the fact that variance is a double edged sword yet one more time!

Still a lot of fun. That Greenbrier Craps table has given me a lot of sessions that break even, but I've lost plenty of times and won a modest amount maybe once.

Armed with my new strategy though, I've got to give it another go one of these days!

Not only was he groped, rolled and cursed at, but someone also rearranged his pips!

man, that's what you call groping!

I have always wanted to go there but I figured tables would be much higher limits.

the expense involved is just staying and eating there, which is required ... so you have to go with the attitude that you are going to enjoy being at a kind of cool place with fine dining, able to afford a splurge.

The table limits have come down from where they started at first.

Back to the Greenbrier part 2

The Greenbrier BJ has switched from S17 to H17, so having played with the former rules a guy might feel like 'punishing' that decision by not playing [which I did once]; on the other hand, once you know how to play BJ, and you have a game still less than 1% HE, perhaps a player has to accept the game that is offered - I am certainly not in a position to be too choosey considering that I moved about as far away from area casinos as you can about 18 months ago. Additionally, the nature of H17, what with more doubling in BS, has to increase the variance.


Which leads me, well, astray perhaps. Is it actually possible that H17 is a better game for someone like me than S17? Surely a disciple of the Wizard could not think so!


Bear in mind I consider the variance in BJ to be too low for my taste. A recent thread pointed out that not everyone thinks like this, but for me the worst game is to sit there and watch your bankroll do what I like to call "a wobbly circling of the drain" ... some highs, some lows, but rare is the session, if long enough, that you don't lose money. In contrast, some say they "like how long their money lasts". That ain't me. I too, though, am playing with negative expectation, but I want more frequent winning sessions.


I hate to say it, but for someone with my tastes, I think it could be that H17 is a better game; specifically I mean getting increased variance at the cost of increased HE. Of course it depends; just to make a weird but illustrative example, if the house changed to paying 6:5 for a natural but allowed a side bet paying 2 to 1 at free odds, that would increase the variance nicely but still would not be worth it.

Certainly in the other extreme it would have to be worth it to a player wanting more variance to pay a 0.05% increase in HE to have the Standard Deviation double.

But lately the pupil has decided to scandalize the master even further, and I imagine the Wizard would feel this way, 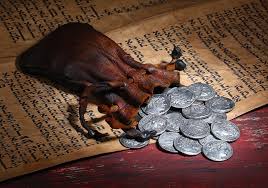 Oh, it's not that bad, but really a departure for me: playing the "In Between" side bet. I figure it must increase the variance, and at The Meadows you can bet $1. I played it for a session there, my usual one shoe or so with BJ. It was easy to keep track of it as it involved the only $1 chips I had, and I broke exactly even with it. So I thought I'd try it at The Greenbrier too this time. Turns out although the minimum bet is $5 as a weekday special, this goes for the sidebet too. I certainly didn't want as much exposure as a frequent bet would mean, and decided to risk a chip just whenever a double-down paid off. Increase that variance!

I played for 3 or 4 shoes, unusual for me, and including this side-betting, broke even [2 and a half dollars ahead exactly]!

So far all the evidence I can muster indicates H17 and the In Between side bet decreases the variance! What!?

I'll just say that H17 is not a deal breaker. It's about rules and penetration.