20 minute ride from SkyHabor Airport. Cab is $45 + tip, limo $60 plus tip. Or overpay on a rent-a-car. The ride shows a flat sprawling valley city, typical of the South West, but with – of all things, Housing communities that were built going UP the side of the local mountains. I guess that makes sense, since the view is important, and the fact that it doesn’t snow in this neck of the woods (or desert). A 4 x 4 wouldn’t save if it did. We (Dan and the Mrs.) elected the cheap 55 minute flight versus the 5-hour/300-mile drive each way. Yes, the flight costs more when you get 35mpg highway, plus cab. Skyharbor airport to Talking Stick:

No shortage of bell caps to whisk you in; check in was a breeze, and would have been painless except for the fact that there are no smoking rooms or suites. “We have an outdoor smoking lounge on the casino level across from the Heritage Museum for you dinosaurssmokers. Okay, I got it. I also got a 20 pack of 4mg Nicorette gum.

Regular rooms are small, but wonderfully appointed; I personally expect at least a studio-sized apartment room at fancy joints, but such is not the case. Little matter, actually, as they were comfortable and classy. I was going to get a single King size bed, but my wife quickly blurts out: “Separate beds, please! - and a NO smoking room!” Boom, she was that quick. (The female registration clerk gives me that quick “tart-tasting pressed lips” smirking glance: “oh REALLY now…I see…the wife is pissed…..”) Surprisingly, many rooms had this configuration, few Honeymooners here. We got room #1111, on the eleventh floor. (Is this binary, or two Yo’s, I wonder….I think It’s gonna be lucky. And it was, for a while…)

Plenty of heavy Rosewood/Mahogany all over the place, Huge flat-screen TV, (and Free Wi-Fi for your laptop so you can check in at WOV!) Redwood wooden window blinds, a bathroom almost the size of main room with separate tub and huge glass shower stall – and OH! - the showerhead gave a WATRFALL-like downstream of perfect temperature and envelopment, like showering in your own personal waterfall. Jerry Seinfeld would have had a field day with this on his show.

They have a full spa (facial, massage, etc.), but that’s for the Mrs., being old school. The shower was plenty spa enough for man, here. Here are some pictures of the Property (Atrium, Casino Level Walkway, etc.) 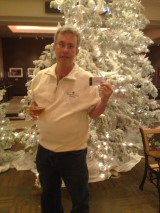 Big. Surrounded by upscale bars galore. And busy all the time. It is very much like a large, jammed up, and true gambling hall, like the Orleans or the Venetian, I love to see this. Classy, and quiet enough to hold a conversation, but noisy enough to have a sense of energy and activity. No need for blaring disco or rock music, the pit is pure gambling action, and the bars social action. Clientele were middle/upper middle class Americans or Asian-Americans, with a smattering of young frat/jock types occasionally getting out of control, corralled and spoken to by security, with seemingly little AP play. Some may wishfully say, “They were there, but they were so awesome, beautiful, and competent that they were under the radar,” while others may say “the place is discreetly very tight and very strict with them in that department,” – with your particular “camp’s side” braggadocio on this issue making the unverifiable call. In this regard, things are different in an Indian Nation Casino than with a casino on forked tongue American soil. One would rather face a Nevada back-off than face a Chief “I don’t Play Tomahawk” Judge, in case of some incident. I wouldn’t get slick in an American Indian jurisdiction casino. You’re here for play, not work, unless you’re in a uniform or in a suit on the floor. The dealers here “go for their own [tips],” carrying their toke boxes around table to table. Dealers would clearly prefer to deal Three Card poker, where every straight or better won by a player generally gets a throw in and a fist-pump, and where the Pairs Plus and ANTE often have white up for the dealers – with tipping being contagious on a happy and hot three Card Poker table. Straight-up even money games like BJ and Pai Gow Poker games are a little tougher for the crew to make tokes on. I tipped red on Pai Gow Poker, on the main bet, and got fine acknowledgement for it. Dealers appreciate your fine consideration here, and show it. Polite, friendly, engaging, and warm dealers can do very well providing service. Floormen know this business, and are courteous also. Comps are moderate, as it is a busy green-action place with no shortage of business; it is very well run, with correctly dealt games and an absence of overt floor issues or incidents. The jammed-packed Friday and Saturday nights before New Year’s had smooth busy play with no visible incidents or Law enforcement needed, just legions of well-behaved people enjoying the weekend nights. In this regard, TSR is similar to upscale Vegas places like Red Rock, The Venetian, or Green Valley Ranch. The pit has 50 tables or so, including:

Blackjack Shoes and pitch, 3:2, BJ being about 50%-60% of the total tables, with all tables standardizing on Lucky Ladies side bet, and two tables using the SHFL/Bally progressive based on the dealer’s length of hand, (a renamed/variation of Hit-and-Run?) CSM’s were basically not to be seen. (YEAH!!) Lucky Ladies got some action, but the SHFL progressive was silent, essentially frozen at $2,814.86 for the four days I was there. In SHFL’s defense (not that they really deserve a defense….), it is VERY hard to create a good progressive for BJ, and this is proven in the fact that they just can’t seem to really catch on no matter how hard the industry tries. I believe that this is due to fact that:

Pai Gow Poker was composed of two tables, both EZ Pai Gow, and both busy as hell. Most times I couldn’t get a seat, or if I did, I was told to put out my cigarette by other players to be allowed to stay. Some PG aspects – and these are the Talking Stick “Internal Control” pit rules, not the EZ Pai Gow rules, but it is the Casino Operator who makes the “IC” pit rules and final configuration of a particular table game:

No Crap Tables here! Damn! They had instead these Automated “Bubble Crap Game Machines,” (Interblock, Aruze type), along with their Automated roulette game counterparts. Small 3” dice cubes instead of the big 6” dice cubes. A disembodied “2001 Space Odyssey” type female voice would eerily announce “Six, Easyway Six, No Field, down behind the Six…” Just Creepy….automated table games are just unAmerican…..In TSR’s defense, It is very hard to find both reliable crap dealers, as well as well-behaved crap players when on a live dice game, so the Bubble Crap Game Machine saves on dealer expenses, and enforces good behavior from the players, as you cannot take shots or argue calls against Miss 2001 Space Odyssey Computer Voice. She might say, if you try to slap the CyberBubble: “Warning to player at position #6….the Robot Police of CyberTron will arrive shortly…shortly…shortly….” Three Card Poker. Okay, now we’re talking. I had a good 2nd session on it, as I played it whenever both EZ Pai Gow tables were full, which was typical. Three Cad Poker was also full, with me usually getting the LAST available east. Had a bad first session, and a good 2nd session on it the following day, where all I got when I won was Straights, pairs, and trip 10’s. I LIKE 3CP as a fun game to play; they had some UNUSUAL Ante bonuses, Paying something 50-1 on a mini Royal, 10-1 on a Straight Flush, 8-1 on trips [not sure in hindsight, lost my notes], with no pay on a plain-Jane straight. This makes big hands really big.

Carnival Games. A politically incorrect term for new game variants. Not many here, but they included at TSR: