A Tale from the Backroom

I've been backroomed at a casino on one occasion, now, I've been to the backroom on other occasions, but I did not choose to be on this one occasion.  Unfortunately, I am not at liberty to divulge any of the details that led to this backrooming, so, we're going to have to pick it up in the middle.
As anyone would do, I tried to avoid going to the backroom.  It was suggested by the casino representative that I might not want to talk in front of all of the people on the floor, but I indicated that I would be just fine with talking in front of all of them. 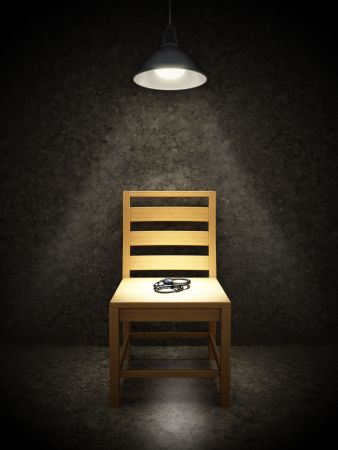 We talked for awhile and an individual flipped his badge and introduced himself as an officer with the State Police in the State in which this backrooming occurred.  Since we were still out on the floor and I had not been tackled, pinned to the floor, and cuffed, I was not particularly alarmed.  I was then asked to empty my wallet in a tone that implied resistance to this request would not be taken kindly.  That was by the officer, of course, I'd have suggested to the casino representative a nice place where I could stick my wallet had he been the one to ask.
They had no reason to arrest me given that I had not done anything illegal while I was there, and I think the entire conversation might have taken place on the floor, unfortunately, I had in my possession a Debit Card (with permission) that did not have my name on it.  I believe that is what may have led to me being taken to the backroom.  I guess I could have still attempted to refuse, but given that the individuals in question now had this Debit Card, my Driver's License, and a few other possessions, I felt compelled to obey.
At this point, I wondered about the legalities of having someone else's Debit Card in my possession.  I was about 99.2% confident there was nothing inherently illegal in that act, but I was a bit concerned about how long I would be detained when the officer asked for the phone number of the owner of the Debit Card in question.  What if he couldn't get ahold of him?
In any event, I was then asked a volley of questions, mostly by the casino representative, about the circumstances that had led to my being backroomed.  I answered the questions as truthfully as possible, except for the ones that I lied about.
Fortunately, the individual to whom the Debit Card belonged answered on the first attempt to call him and verified that I did, in fact, have permission to be in possession of the Debit Card.
The main thing that I took away from the experience was that, in my opinion, being backroomed wasn't exactly a terrifying experience, much different than the horror stories that can be told by a number of people who went through the ordeal, but then, if those stories had been as uneventful as mine, you probably wouldn't have heard about them.
Everyone involved in the process seemed very professional about the whole thing, and other than strong implications of what non-compliance would get me, (arrest) I would say that there were absolutely no insinuations of imminent physical harm whatsoever, no yelling and that the worst I ever received was an occasional biting tone when one of my answers was not believed.  Interestingly, out of the three answers that were not believed, all three of those were the TRUTHFUL statements!
At the end of the questioning process, all of the items (well, most) were returned to me and I was released.  They asked me where I had parked and, perhaps surprisingly, did not walk me to my car or even noticeably follow me, though they did explain to me the quickest possible way to get there.
I was verbally 86'ed from the property and was informed, in no uncertain terms, that returning to the property could very well result in my arrest.  Unfortunately, I have no choice but to take that threat seriously given the fact that the officer was present at the time this was told to me and would likely have interjected if anything else was the case.
I wish I could give some practical advice on how to handle a backrooming, but I must say, that I am far from a professional in that regard.  I think that I handled the situation mostly right, but there are a few things that I might have done differently.
For one thing, I probably could have simply refused to talk, at all.  While this may not be a great excuse, and while I did not give much information that was actually truthful, (again, when asked questions by the casino representative) I could definitely have refused to say anything and there would be no way for the casino representative to try to threaten me into doing so given that there was an officer of the law there.  I cannot help but be curious as to how that would have played out, if anyone out there gets backroomed and decides to try it, let me know how it goes, please.  I'm going to try not to get backroomed again, but if I ever do, I'll adamantly refuse to speak just to see what happens so I can write a follow-up to this Article.
Of course, not all backroom experiences will be as (physically) non-threatening as mine, I'm sure.  With that said, the only advice I can give is that they are not all experiences so negative that a person getting backroomed has to automatically be concerned about his physical well-being or with having that physical well-being threatened.  With that said, the only advice I can really give is just to try to keep a cool head about you and judge the severity of the situation as it unfolds.  If you are heading back to the backroom with your knees quaking and preconceived notions about the physical punishment that is about to befall you, then whatever happens, you're already at a greater disadvantage in the situation.  It is fair to say, though, since an individual was introduced to me on the floor as a police officer, I had much less of a reason to worry.
My other piece of advice is this:  Try not to get backroomed.  Even if you don't get roughed up, it still doesn't make for a terribly pleasant situation.