A Tale of Two Vices

Gambling is a vice that has often been associated with other vices.  It is not unusual to see a Slots, Video Poker, Video Keno or Table Game player enjoying a drink whilst playing his/her game of choice.  Furthermore, for anyone who has ever walked into a West Virginia slot parlor, if you see a non-smoker in there, then you have gotten an object lesson that there are occasionally exceptions to rules.

The combination of gambling and sex is also one that has occasionally presented itself in subtle ways:  The expanse of, "Party Pits," consisting of scantily clad dancers and dealers in many of the Las Vegas casinos is one example.  Another example is the booming underground, "Call girl," trade in Las Vegas and, to a lesser degree, other centers of gambling. 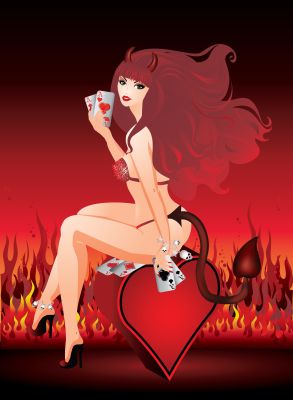 Keep in mind that the combination of pornography and casino games is not in itself an original one, a Google Search for, "Online Strip Poker," will reveal a plethora of websites (some with No Download required) in which visitors can enjoy a game of Strip Poker, Strip Blackjack, Strip Hi-Lo or Strip Video Poker, just not with actual money on the line.  These sites have even expanded to mobile, on occasion, with sites such as Racypoker.com available to be played on a smartphone without any downloads required.

I suppose that will be enough stalling on my part, it is now time to pay a visit to https://www.pornhubcasino.com/.

The Main Page is not unlike other Online Casinos in the respect that it promotes its offerings, whether they be slots, Video Poker or Table Games.  It is unlike others in that these pictures and descriptions consist of a cornucopia of naked breasts and women in varying states of undress.  By hovering over any one of these pictures one can determine whether it can be a, "Play for fun," game or whether it must be played for real.  Unsurprisingly, all of the live dealer games can only be played for real money.

For those of you looking to stick your units into some teen slots, this is a pretty rudimentary slot game in which the only special features consist of some stacked symbols (which pay well) and Bonus Games.  Interspersed in your spins will be small videos that take place anytime three symbols or more are hit, one would think they might also be longer for four or five of a kind, but they're not.  Longer videos will occasionally play for Big Pays and the entry to the Bonus Games consists of a montage of various degrees of vaginal, and possibly anal, penetration.  The conclusion of Free Games involves a gentleman ejaculating upon the exposed breasts and face of a woman.

There are also games that do not involve nudity, such as most of the Table Games with no live dealer and a plethora of other slot machines.

There is also a section for Webcam Poker, with both play for real and play for fun versions.  However, at the time I was logged in, there was nobody participating.

I'm not particularly interested in pornography, to be completely honest, but my impression of the slot games is that they would grow tedious even for individuals more inclined to watching strangers penetrate one another in various ways.  Additionally, some people might be disappointed in the Teen Slot game because, for some of these women, the last time their age ended in, 'teen,' is probably when Clinton was still in office.  The Webcam Poker holds potential for people who would like to see one another naked, but if it does gain players, if I may be so bold, I would expect a proverbial, 'Sausage party."

One has to be a cash player in order to do anything involving the live dealer Table Games, but I should imagine it involves nudity or near nudity.

one thing potential players should be aware of is the Costa Rican jurisdiction this Casino has, which is not what you would consider top notch.

granted we havent got a single complaint since they launched , and not saying that we would or expect any.

however, just be aware of this fact when making an educated decission to play or not.

Good tip about the jurisdiction. I could certainly understand now having any complaints since launch, if the Webcam Poker is any indication, they don't have too many players. I also noticed while I was perusing the site that the same player was on the right side of the screen for a two-hundred something dollar slots jackpot, so touting such a small jackpot leads me to the conclusion that they might not have that many (paid) players yet. They also do not appear to be accepting, "Play for Money," U.S. players at this time.

according to their T&Cs - The following countries are restricted: France, United States

Bear in mind that I'm in the UK and generally play European online casinos, which I do trust. Being in the UK gives me the advantage that PH casino is available to me.

First impressions:
Unlike Euro casinos, I had to credit in Euro or US Dollars. No Pounds Sterling option. This may involve currency translation fees.
No facility to credit by PayPal.
So, I credited €25 and proceeded to the live dealer blackjack.
Impressive. The user interface was slick: The min bet was only €1 and the rules were GOOD. DAS, S17, Surrender. BJ 3:2 Those rules and house edge much better than my favourite UK gaff.
Getting a seat was a bit slow with only one BlackJack table operating but not too bad.
There was visibility of about 4 dealers working blackjack, a roulette table a baccarat table and something else. All dealers were in assorted black lingerie. The dealers were all quite attractive, stood up in high heels and were, for want of a better word, wiggling. Poor dears must have been doing it to keep warm*. As I watched a few hands being played, I noticed that every few minutes, the dealer would flash and maybe fondle her breasts. The hardness of the nipples confirmed my belief that the dealers were cold*. I later deduced that this was a bonus reward for player Blackjack or when all players won, or maybe when someone tipped. If the breasts were enhanced, they were done well.
I noticed that other players were almost all playing really badly. Maybe they were distracted from Basic Strategy.

My intention was to try to win my way up to €40 and test the cash out features. I made it to €37 and headed over to look at the RNG offerings. First RNG Blackjack I found had dreadful rules, there was another one with the good rules but it looked a bit lame, but played OK. However, soon I'd lost my buy in and so I have yet to try cashing out. It does seem that before I could ever cash out, I have to email them some pretty detailed personal proof of ID documents. I'll do that later.

I got over three hours of €1 per hand amusement out of my €25 buy in, and I confess I was smiling throughout

This morning, I looked in again with the view to repeating the experiment. My credit card transaction was rejected. I suspect it was rejected by my bank as this was an 'unusual' transaction. I'm not concerned. I do want to see what charges and currency exchange costs are incurred.

I'll be returning. Someone has to do the research, so I'll TOFTT
$:o)