If there's one common casino procedure with which I take exception, it is that of the, "Maximum Aggregate Payout," which essentially gives the casino the ability to take bets without being on the hook to pay based on the paytable of the game in question when a big pay is hit.

This (hopefully) non-existent Video Poker game is similar to Maximum Aggregate Payouts in another way:  If the paytable of the Video Poker game is otherwise perfectly graduated on lesser paying hands, then the Optimal bet is anywhere between 1-4 credits and the player gets a worse return by betting the Max.  The reason is because 1200 credits would graduate perfectly with the rest of the game on a bet of 4.8 credits, anything else and the player is essentially giving the house a Loss Rebate.

For the purposes of a case study, we're going to look at the game of Let It Ride, in this game players are dealt three initial cards and have to decide whether they want t leave all three bets out there or take one back.  After making this decision, the fourth card is revealed and the player again gets to decide whether to leave any remaining bets out there or to take one unit back.  This is certainly not the only game for which a Maximum Aggregate Payout has applied, but for the purposes of an example, it is probably mathematically the easiest to use.

We will use this Standard Paytable from WizardofOdds.

The highest roller might bet at $50 per spot, and assuming a player is going to be paid in full, the Optimal Strategy for Let It Ride would have us let ride any Three Royal Flush cards that we get initially.  For instance, we would let Jc-Ac-Kc ride largely due to our chance of hitting the Royal. 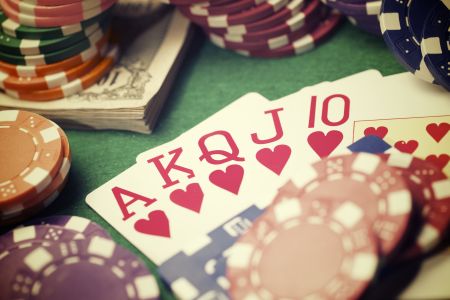 Unfortunately, that's when the Royal Flush pays 1000 to 1 which would be a pay of $150,000 under the posted odds with a $50 bet per spot.  However, due to the Maximum Aggregate Payout, this $150 bettor would only receive $25,000 (assuming no side bet and no other players playing and hitting winning hands) which is 1/6th of what he should receive.  Therefore, the return of the Royal is 1/6th what it should be.

Figuring out the Optimal sized bet to ensure the player always gets paid according to the paytable is a relatively simple task.  Simply take the $25,000 and divide by 3000 which is the overall return of the Royal (1000 to 1, per spot).  Therefore, the player should never bet more than $8.333- per spot, such a bet is impossible, of course, so just call it $8 per spot.

Does $8 per spot sound like a high-roller to you?

Why Casinos Do It

First of all, Maximum Aggregate Payouts are patently indefensible, however, casinos institute them for a very simple reason:  They want all of the benefits (House Edge = Expected Win) of players making large bets, but they don't want to take the risk of sustaining a tremendous loss.

That, in and of itself, is almost understandable...particularly for a small casino.  The casino could very easily have a losing week (or month) on a Let It Ride table if a couple of Royals are dealt out to Max (or near Max) bettors.

What the Casinos Should Do

The casinos want to gamble with as little Variance as possible given that they are at an advantage, but at the same time, they want to size their Max Bets to make as much money as possible without sustaining a loss that they cannot tolerate.

Many casinos probably could not deal Let It Ride if they were not willing to accept a Max Bet greater than $8.00, it's a bit of a dying game and would probably not be profitable even at a Min-Max spread of $5-$10.  Therefore, there must be some sort of compromise.

My suggestion is that the casinos should treat Maximum Aggregate Payouts for any side bets and the Base Game separately to the extent that hitting the Maximum Aggregate Payout of one does not apply to the other in any way whatsoever.  Secondly, in a game such as Let It Ride, if a Royal is hit, only one player could have possibly hit it.  The worst case scenario is one hits a Royal and the other a straight Flush holding 7-8-9, suited, while the community cards are a suited 10-J, quite unlikely.

Therefore, Maximum Aggregate Payouts should only apply to the top pay of the game possible and any other players should be paid according to the paytable.

Finally, in simple English, at the bottom of the Maximum Aggregate Payout sign it should read, "The most you can bet while assuring the full return of the game is $8.00, per spot."

Only then will Maximum Aggregate Payouts even approach something that I can tolerate, or that any players should tolerate.  In the meantime, my advice is to know the math and never make a bet for which you would not receive the full return in case you ever do hit that, "Miracle Hand."

"giving the house a Loss Rebate"

I mean I like your wording, but I don't like that, actually, that is what it is LOL

The worst case tends to be PGP. Most pay 8000-1 on fortune and give you the envy bonus if you get $5 or more. However, most casinos have an aggregate of 25k. Therefore, they encourage you to bet so much that you will now get screwed on a seven card straight flush with the "recommended" bet.

As for this article, I think it will be useful as well https://www.casinoz.club/content/gambling-tycoons learn more about casino tycoons and become cooler than them!