At What Point Should a Casino Ask Questions?

Former Cleveland Browns Wide Receiver Reggie Rucker is facing charges for using hundreds of thousands of dollars from his non-profit agencies (that he repeatedly claimed were not paying him in order to solicit donations) to pay off gambling debts and other personal expenses...but mostly gambling debts and casino ATM withdrawals. 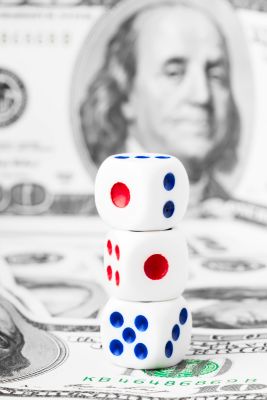 On the first of what would be multiple occasions, Reggie Rucker explained that he was attempting to solicit funds from a foundation, and forwarded the E-Mail from the foundation to the casino as proof he had the funds along with the following messages:

"This is my non-profit and they were a little behind getting me my money...Can they work with me on this?"

"As you can see from this correspondence, [Foundation 1] threw me a curve!  I won't have this money in my hands until March 2nd or 3rd...These things sometimes get delayed like this because of the amount of money..."

The casino(s) in question (there were multiple similar occurrences) are held so blameless, in fact, that the Criminal Complaint does not even specify the name of the casinos in question.  Granted, if he were officially paid by any of his NPO's, then Reggie Rucker would certainly not be the first person to ever be so compensated, but then the verbiage one would expect is, "I'm waiting to get paid," rather than specifying that it is a non-profit organization.

However, it is possible that the employee doing the collecting for the casino might not have been in any way suspicious of the legitimacy of Mr. Rucker's source of funds, but it is difficult for me to act on that assumption.  I believe it is the more likely case that the casino employee WAS suspicious, but then ultimately decided that it would be better for him/her not to concern himself/herself with that, and rather just to do his/her job and get the employer paid on that marker.

With respect to monies, casinos do have certain obligations.  For instance, they are required to fill out W2-G's for winnings of certain amounts and under certain conditions, included in this responsibility is the responsibility to deduct taxes from the winnings should the customer so choose or if same is otherwise legally required.  Casinos are also obligated to fill out Currency Transaction Reports in certain situations, as well.

Just to be clear, I'm not taking the position that the casino currently HAS a legal obligation to report any suspicions about the funds used to pay off markers to an authority of any kind, I'm simply suggesting that the casinos SHOULD have that responsibility.  I'm also suggesting, in an ideal world in which one can make a moral decision without fear of termination, that it would be better if the casino employee (assuming the employee was suspicious) could divulge those suspicions to an agency of some sort without fear of reprimand from his/her employer.

Who Are the Victims?

Everyone is a victim.

The sources of the donations to Mr. Rucker's NPO's are as varied as banks, hospitals and even the Cuyahoga County Sheriff's Department.  That may initially seem like businesses and government entities, but those businesses make money off of their customers and the Sheriff's Department is presumably financed with public tax dollars.  Further, everyone who works for the NPO or made donations under the belief that Mr. Rucker was not compensated (as it turns out, an obscene amount without their knowledge) by the NPO, was also straight up bilked.

For those of you interested in reading the criminal complaint, it can be found at the bottom of the Article to which I linked above.  What bothers me the most about this entire thing is that it doesn't read like the story of a compulsive gambler who got in over his head and could, in some sense, almost be viewed as a victim...it reads like a guy who loved to gamble and thought the gravy train was never going to stop rolling.

It is difficult to know what other sources of money Mr. Rucker had his hands in, and perhaps that information will never come to light.  The one thing that I do know is that at least one Las Vegas casino (and perhaps more) knew that markers were being paid directly by way of monies donated to a Non-Profit Organization and were not legally (or, apparently morally) required to do anything about it.

These illegal and fraudulent transactions that went on well into the year 2015 could have been investigated and stopped back in 2013 if the casino had been required to report what I think anyone would suggest was a very suspicious E-Mail.  That the casino was not required to do so is a shame, and that the casino did not report these E-Mails, even absent of a legal obligation, is almost equally shameful.  In my view, all parties involved are victimized by the casino almost equally to the extent that they were victimized by Rucker.

***I would also get into why I don't think an organization that subsists on tax revenue (The Sheriff's Department) should be making any donations to any NPO under any circumstances, (taxation without representation) but we'd be getting a little too far away from a gambling-related topic to have that discussion.

How can you possibly write an article about Reggie Rucker33 without mentioning Brian Sipe17, Ozzie Newsome82, and the rest of the Kardiac Kids? Get your priorities straight.

BTW, good article. Casinos definitely need to show some responsibility under circumstances like this.

Maybe I'll do some kind of series. Although, this Article was really meant to be more about the casino's actions in this situation than about Rucker, per se.

You may have noticed with my recent blog posts and a thread on Clinton Portis that I recently have taken an interest in professional athletes and the Casino Marker system. Excuse this lengthy comment.

I can't add anything on your assertion that the casinos involved were indirectly complicit in Rucker's crimes other than to say you may be on to something.

The question that is looming large for me is this: how much are these instances a matter of giving gamblers enough rope to hang themselves and how much is it a matter of Predatory Lending practices? That latter phrase is getting a lot of use these days. Should casinos continue to be able to avoid scrutiny in these instances?

Here is a scenario in the case of Portis that gets the Borgata casino [in this case] slightly off the hook: Portis declared bankruptcy in December with finalization in the news just before Christmas 2015, and the news that he couldn't cover his markers came out in the news on Feb. 4th 2016. These dates are close enough that a case can be made that the casino involved was unaware that Clinton was in financial trouble and his bankruptcy imminent. He then requested Markers for large amounts, delighted to find his 'credit' was still good somewhere, and accepted that money perhaps knowing these Markers would not get paid off.

Entirely possible. But I am willing to bet that Borgata knew all these things. I am willing also to bet that Portis already had established with them that he was risky to lend to, failing to pay off markers in the past. The news reports often slavishly say he wrote them 'bad checks'. But I think he knows and we know these were loans. The casino knows, however, legally the bad markers are a more protected type of debt.

The thing is that is unacceptable is that the casino is allowed to make risk free debt and then have it considered to have special status untouchable by bankruptcy proceedings. Now, why would I say risk free? Let me list those things again and point out again why they are so sweet to, yes, a predator. He has established he is totally addicted to gambling and constantly gets in this debt. Although your balance sheet says he has rooked you out of money, the casino slyly knows better. You let him continue to play with this special kind of credit. What is the risk? He always gives it all back. For one thing, when he does win, you'll be demanding he pay off his debt. And here comes the part that needs to be grasped:

You have taken all his money he has to give. But perhaps he has some sort of income. You will get that too. Perhaps he will beg, lie, cheat, and steal to get more money to gamble with. You will get that too. You wind up owning this guy, you have total power over him. He must somehow get the money he owes you. You keep showing nearly meaningless 'debt' he racked up, and you have court protection too, that he has to pay it.

Think about Rucker. Don't tell me he didn't fail to pay Markers in the past. Now he steals hundreds of thousands of dollars to make it right with the casinos. "Now you get that too". Yes. This has to occur to the casinos.

So, was the Nevada Gaming Commission asleep at the wheel ?

Those are excellent points, and perhaps I'll do a follow up Article that will look at the Clinton Portis incident more in-depth. I would imagine that the casino also has some idea of what he would play and how skilled or unskilled he is, so they can perform a reasonably accurate analysis of how likely he is to be able to pay back previous markers with his winnings.

Basically, if a guy is (already) in the hole for, as an example, twice the amount you are lending him and is a Craps player, then there is not a great chance he is going to make it all back at the Craps table to pay off the new marker and previous markers by those means.

In that sense, I think you're pretty accurate to say that they end up, 'Owning,' the guy. Furthermore, he is going to want to feed his addiction, so even in the event that he does not file bankruptcy, the casino can feel somewhat secure in the knowledge that they might be the first to get paid.

In this case, I don't see how the NGC would have had any way of knowing what was going on ahead of time. I also don't know to what degree they involve themselves in the marker/casino credit processes.