Orlando Carmelo Scarnecchia, born in the town of Steubenville, Ohio (near where I grew up) later anglicized his name to, "John Scarne," and it could be said, became the first Wizard of Odds.  Much like our own Wizard, Scarne grew up with a keen interest in magic, but unlike Wizard, Scarne initially practiced slight of hand tricks in order to manipulate cards in his favor.  Scarne, after a good few scoldings from his Mother, would later renounce cheating and pursue a successful career as a magician and writer.

Scarne didn't just know card games, either, he was a sharpie in all senses of the term.  Scarne's most well-known work, Scarne's New Complete Guide to Gambling, is a bit dated compared to the simulation and computer-program driven works of today such as Wizard's own Gambling 102,  but I think that Scarne's work is necessary reading and is also a good textbook with respect to the mathematics of gambling if you're like me and barely have the technological know-how to work your cell phone alarm. 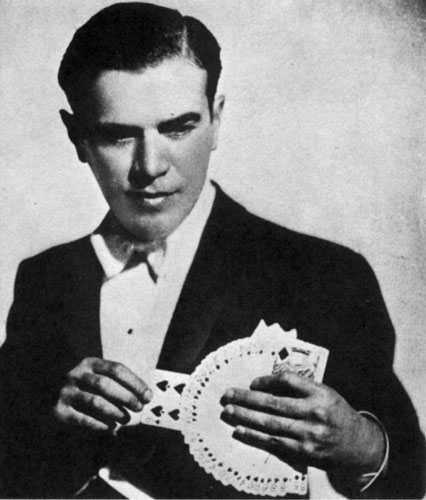 While Scarne was not much of a gambler, he certainly had an interest in the Odds and was also an extremely well-rounded person.  In his Complete Guide to Gambling, you will see Scarne analyze not just table and chips gambling, but also how carnival (as in, fair) games are gaffed while made to look beatable and, in some cases, how they can actually be beaten.  Beyond that, Scarne was also an inventor whose most well-known (and his personal favorite) invention was the game, 'Teeko.'

It took a brilliant man (Guy L. Steele Jr.) and a computer in 1998, decades after the final version of Teeko had been released, to determine that if both players play an Optimal Strategy (much like Tic-Tac-Toe) then neither player could possibly win.

Perhaps the biggest blemish on Scarne's otherwise impeccable reputation was a failed attempt to discount Edward O. Thorp's (author of Beat the Dealer) Blackjack Card Counting methods.  As we all know, Thorpe was quite correct on that one.  What would have been interesting is that Scarne actually wanted to put his counting system up against Thorpe's, (computers could settle the dispute in mere minutes these days) but they were never quite able to agree on the terms.

Noted Sports Writer John Lardner once said of Scarne, "Scarne is to games what Einstein is to physics," and he couldn't have been more right.  More than anything, having learned that lesson from his mother, Scarne wanted games to be fair.  During World War II, Scarne was outraged when he saw soldiers who were green to gambling getting ripped off in card games and vowed to make crooked gambling a thing of the past in the Army and Navy.

More than just a gambling expert and a magician, Scarne was a problem solver.  In addition to, "Scarne's Aces," a trick in which he would use a deck borrowed from one stranger and shuffled by another and cut to the Aces without doing, well, anything else, Scarne also wanted to perfect magic.  It wouldn't be unusual to hear Scarne refer to slight-of-hand tricks as, "Two-Bit," so he set his mind to taking some of the favorite tricks of other magicians and re-working them so that slight-of-hand did not need to be utilized.  He did this with a full 150 magic tricks, an almost seemingly overnight revolution in the way that the most popular tricks were performed.

There is even a piece of advice for the Non-AP slot players out there that I could imagine our own Wizard speaking, "My last piece of advice to the degenerate slot player who thinks he can beat the one-armed bandit consists of four little words: It can't be done."  Of course, if I recall correctly, Scarne did write about a backroom (illegal) slot machine trick or two where some shady characters were making money, but they were not degenerates, at least, not in the way he means in the quote.

John Scarne is a fitting character for this second People in Gambling Article because he stands in direct contrast to Richard Marcus.  Richard Marcus learned about cheating (by being cheated) at a young age and decided that cheating was something that he could utilize to advance his standing in life.  He took the first opportunity he had to bilk his employer out of a crap ton of money by ripping off the tables at the Four Queens Casino.

Scarne was almost entirely different because, despite his profound knowledge of gambling, unparalleled for the time, really; he took one look at cheating and shady dealings and decided he wanted absolutely none of that.  The straight shooter with the slicked over hair in the pinstripe suit devoted himself to solving problems, inventing games and entertaining the masses with his incredible magic.  Scarne's New Complete Guide to Gambling remains a recommended read to this day, even though it is rudimentary compared to what computers can easily spit out.  Despite his lack of involvement in active gambling as a player, (he did assist in the management of a few casinos, including a foray to catch cheaters and thieves) there was a time that John Scarne was the World's Most Foremost Gambling Authority.  For that, he should be remembered.

Very interesting. I didn't know much about him but now I would like to read his autobiographies.

Hopefully I can find them at a library because they are out of print and expensive to buy.

I might be inclined to pick up, "The Odds Against Me," one of these days. If that ever happens, I'll send it to you after I read it. For that price, though, I'm definitely going to offset it with a Review! LOL

When I was growing up one of the reference books in our house was [i]Scarne on Cards[/i]. There was many a rainy day that our dad would bring out that book and we'd pick a game at random and learn it and play it. That's how we learned games like Oh Hell! and Double Deck Elimination Hearts.

I imagine it was the equivalent of the Bicycle or Hoyle books for many people at that time! Oh Hell certainly seems like a fairly complicated game to try to win, (I just looked it up) if I had to guess, I would say that bidding zero more than most people might think would be a strong strategy for a player that had a hand that didn't have at least one or two monster cards. It's true that you would be essentially penalized by only getting ten points if you are right, (because you didn't take any tricks) but as long as you can avoid leading, you can just tank your middle-strong cards against other leading players.

As you had mentioned the only downside was Scarne's refusal to admit card counting was a legitimate strategy.
His Blackjack strategy is inaccurate and he never changed it in future editions of his book.