OK, let’s get this out of the way first: It’s kindof a goofy name. A bit too macho, perhaps too sophomoric, and definitely too 1990’s “Top Gun”. Or I’m just getting old. Or a bit of both.

But having said that, IMHO, this is one of the COOLEST things you are going to be able to do on Vacation in Las Vegas, or anywhere else. I give it an enthusiastic recommendation. ( And for what it’s worth, so does everyone else on TripAdvisor.com ).

Where else are you going to be able to strap in to a single engine state of the art $ 500K high performance acrobatic plane with an ex-Air Force pilot, fly out over the desert, and do some crazy-ass aerial acrobatics ? And where else, believe it or not, would an experienced pilot let you, “Joe Tourist” the non-experienced pilot ( maybe ZERO experience at all, like me ) take the “stick” and duplicate some of those same maneuvers ?

Goofy name or not, the answer is Sky Combat Ace. 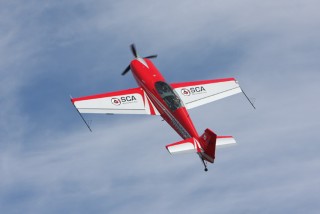 I found a great deal on GROUPON for about 50 % off the regular rate of $ 399 and booked it. That’s how I first heard of SCA. So if you are on a budget or just like saving money to put toward gambling, drinking, or whatever, that’s a good website to watch. I signed up to get E-mails from GROUPON, so that makes for a very easy way to keep up to date on what they have to offer from week to week.

I woke up a little after 7 AM and looked out the window at Bally’s. Overcast, some drizzle. I’m not sure they are going to be able to fly today. When I get a call a little after 8 am, I’m pretty sure that’s what it is about. But nope, it’s just the shuttle driver telling me he arrived a little early, so come on down whenever I’m ready. I take a couple of Dramamine pills and head down with the Mrs, who is the designated picture taker and non-participant.

A short hop down I-15, where at times the drizzle has turned into rain, and we’re at the facility in Henderson. It’s beginning to clear up a little, but we end up hanging around for a while before we meet “BONZAI” , my pilot. He’s a 30-something Air Force veteran who flew F-16’s, very personable, a cool guy. 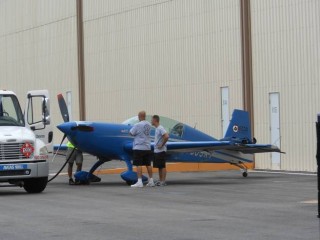 Bonzai the Pilot on the Right

We discuss my comfort level and agree to ramp up the maneuvers one step at a time, much to my relief. He does a very nice job going over an introductory presentation , explaining the maneuvers we can do, safety, etc. My wife picks out my pilot nickname, “Gambler”, which makes sense to me and sounds much cooler than “Mid-Life Crisis Guy” or “Capt Nausea”.

Pilot Briefing Humor: “OK Gambler, the FAA requires us to wear a parachute during acrobatic maneuvers. So if you hear a whoosh of air, and you see that the canopy is missing, and you look over your shoulder and you see that I’m missing, that’s your cue to bail out”. GOT IT !

During the orientation, he describes all the various acrobatics we will do, complete with cool names which I don’t remember exactly. But cool sounding stuff like hammerhead stalls, etc. At this time he also gives us the pitch that the package I have selected is 15 to 20 minutes of flying time, but for another couple hundred bucks they will double the time, toss in some other cool low level passes through a scenic canyon, AND LET ME TAKE THE CONTROLS AND FLY THE PLANE. Me ? Fly the plane ? OK, SOLD !

The plane itself is a tail-dragger, with a tail wheel that looks like is about the size of a hockey puck. Which means the nose is pointed up at a significant angle, and I’m sitting in front of the pilot. So his visibility is kind of restricted as we taxi out. To compensate for all that, Bonzai zig-zags down the taxi-way to the main strip. After a quick call to the tower, we’re off and headed south ( I think ). At times I can see I-15 below us.

I think I have lucked out and actually ended up with a good day to fly. There is enough overcast that I’m not squinting all the time, which is nice because I have managed to leave my hat and sunglasses back at Bally’s.

So with-in the first few minutes of the flight, we start out with a nice easy roll to fly inverted for a bit. I’m strapped in with a double harness, so I don’t go anywhere, but my butt is now a few inches off the seat. Bonzai asks about that, and he says that’s fine for now, but not good enough for some of the other acrobatics. There is a ratcheting mechanism on the safety belts, so I cinch myself in a little tighter.

As we start to do some more maneuvers, Bonzai and I are in contact with a voice activated headset. I like the fact that he keeps tabs on how I’m feeling, and from time to time we take a little break and just fly around until I’m ready again. So despite the Dramamine, I admit I’m a bit queasy. 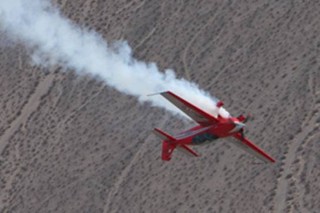 So the coolest acrobatics we did were the 360 degree vertical loop (yep, I got to take the stick for that one) and the vertical stall, where the plane actually ends up heading toward the ground tail first at about 80 knots (yep, got to fly that one too), but I was hands-off to let Bonzai handle the regaining control part !

If you’re looking for something different next trip, check this out. They recommended a light breakfast before the flight, but if I ever decide to do this again, I think I’ll try an empty stomach, if you catch my drift. 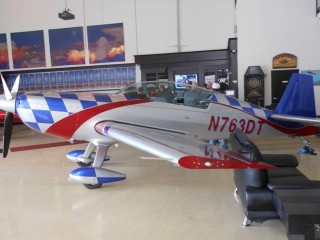 Sky Combat Ace Hangar – If you look really closely (click on any image to enlarge), you can see Carrot Top and a Film Crew in the Background. He arrived while I was heading out.