123 Beans...124 Beans...125 Beans...A hot topic of conversation this week on the Wizard of Vegas Forums is the fact that Aria has apparently decided that they no longer wish to comp top shelf alcohols to players.

For the drinkers of certain mixed drinks, this really shouldn't be too painful a development depending on what your liquor of choice is.  For example, I would imagine that very few people can differentiate a screwdriver made from Grey Goose from a screwdriver made with Smirnoff.  Granted, there are a few liquors (ex. bourbon, scotch) where there might be a detectable difference even if the drink is mixed or cut with something, but for the most part, this should be a non-mover for the drinkers of mixed drinks.

This measure is sort of, but not really, comparable to the drink voucher system that they are trying out with the bar top games at The Mirage.  I'll not go into any detail on that here because I already wrote an article all about that.

The reason I say, 'Not really,' is because this is more of a downgrade than eliminating (or making difficult) getting free drinks altogether.  Besides, I'm not certain what bet level or card level (if any) would still qualify for free top shelf beverages, but I imagine that some players could still get them.  High Limit room, perhaps? 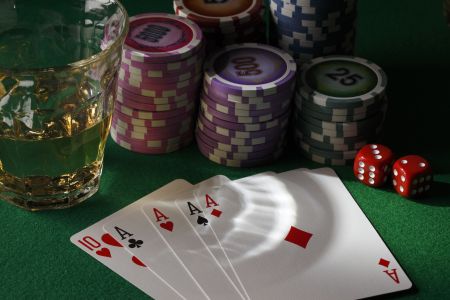 If this is a slap in the face at all, and I'm actually not willing to call it that, then the slap in the face comes to value gamblers.  I think it's quite possible that there are some people who play table minimum on games that can be slow-played (Blackjack, Pai-Gow Poker, Three Card Poker, Craps if you're the shooter) in order to be able to enjoy the finest liquors from around the world.  I'm certainly not suggesting that this describes every player, I'm simply saying that I believe such cases exist.

Furthermore, I imagine that there are people who only play just long enough to have their liquor order filled and then leave the table.  In order to prevent this sort of behavior, I would speculate that Aria is instituting a broader policy rather than take things on a case-by-case basis.  Besides, on a busy floor, the whole thing is probably quite difficult to police.

The reason why I don't look at this necessarily as a slap in the face, an opinion on which I disagree with Vegas Tripping.

Is simply because I understand the costs associated with offering the Top Shelf beverages to absolutely anyone as compared to call liquors.

For example, let's take a look at the difference between Grey Goose and Smirnoff vodka:  I cannot speak for Vegas wholesale prices, but I can say that a Liter of Smirnoff runs about $17 wholesale in Ohio while a liter of Grey Goose runs in the mid-40's.  If you want to assume that there are about thirty drinks in a bottle, then that is a difference of about $23 per bottle.

If we take a look at one player who plays some Craps at $25 Pass Line bets and orders six free drinks with Goose rather than Smirnoff, then the direct cost of those drinks (with my numbers) would be about $4.60.  That may not sound like much, but if you take that many times over day in and day out, I could see where it adds up to a quite avoidable cost for the casino.

Those $25 Pass Line bets have an Expected Loss of roughly $0.3525 apiece, so if you look at the difference in cost between one liquor and another, (ignoring the fact that the player is getting it for free) the casino is effectively handing the player its Expected Win on just slightly over 13 Pass Line bets.

You might argue that not every player plays Craps this way, and that argument would certainly be well-taken, but again, I think the casino is simply trying to take the control over these sorts of things from subordinate staff members and institute broad policies to combat what they may consider abuse.

Anyway, I imagine the casino took a hard look and did a cost-benefit analysis on this very thing to determine how many players will gladly pay for top shelf drinks v. how many players they anticipate losing as a result.  In terms of the average Strip guest who is NOT also a high-roller, I expect that the effect of this change will be very minimal if there is any at all.

One thing to keep in mind is that Las Vegas attracts new visitors every day, so there are people out there that have no concept of what, 'Old Vegas,' was and, therefore, nothing to compare it to.

Actually, they do have one thing to compare it to: Local Casinos.

It is a very rare thing for me to suggest that more competition can actually be a boon to a given company in any given industry, but I think the existence of local casinos actually impacts the expectations of Las Vegas that people have in a manner that is positive for the Vegas casinos.  Think about it:  Some local casinos charge for parking, some local casinos do not give out free booze at all, (and it is even illegal in a few jurisdictions) some local casinos are going to be more difficult to get other forms of comps than Vegas casinos.

Speaking of which, did you know that the possibility of charging for garage parking is also being discussed?

Overall, I am actually going to say that I am fairly neutral on this change.  I understand what the casino is doing and why they are doing it, but I also understand that a small number of players (i.e. value gamblers) are going to be right irritated with this development.  My opinion is that some revenue is better than no revenue, so I would certainly not take a position that I believe invites some players to take their business elsewhere, but it is Aria's decision to make.

I also think that this is a message to, 'Value gamblers,' that essentially says, 'We don't really care for your business if your business results in a small profit margin for us," the good news is, there are still plenty of other Vegas casinos that will welcome you with open arms...and maybe top shelf liquor, too!

The one aspect of all of this that I find particularly shocking is that, with a click of a mouse these Vegas visitors have a wealth of information at their disposal and can very easily determine whether they are getting a good deal and a good gamble, but it seems that value-conscious gamblers are actually a dying breed to the extent that some Vegas casinos (maybe rightfully) believe they don't need them anymore.