Are You There God? It's Me, Mike 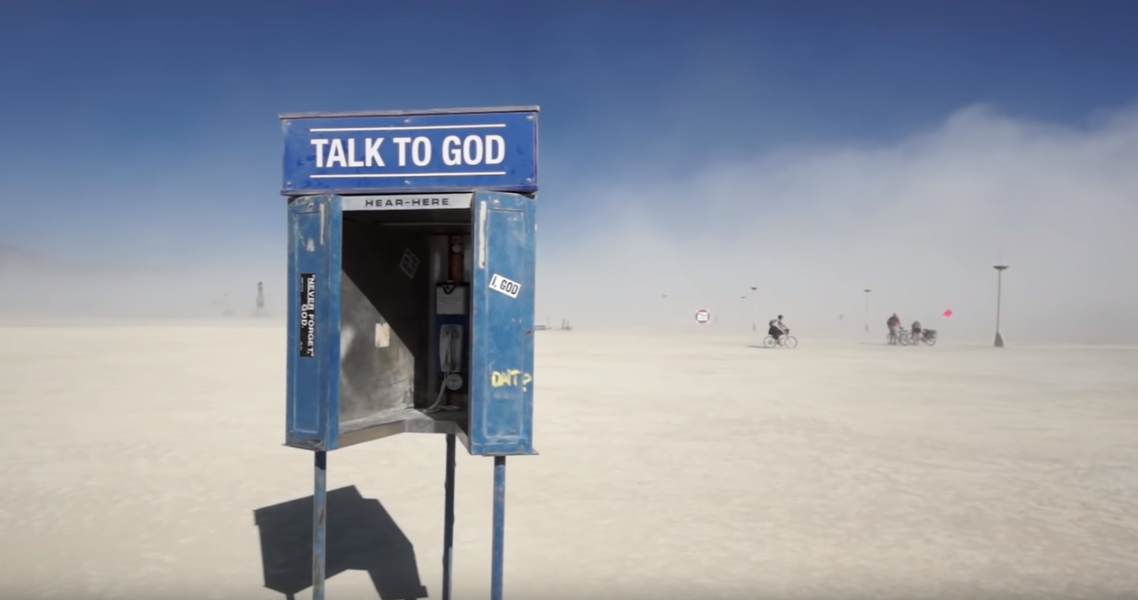 At about 11:00 PM on Friday at Burning Man, I was on the Playa, near the Esplanade, with about an hour to kill before what was supposed to be the starting time (midnight) of a drone show. I noticed a phone booth that said "TALK TO GOD" on the top. So, I stood in a line of about five people to talk to god. As one person hung up and walked away I asked, "What did god say?" She replied it was too personal to share. So I said, "Can you at least tell me whether god is male or female?" She said god's voice was female. Somebody else overheard this, who had evidently already had his turn, and commented, "With me, god was male."

However, the line was moving slowly and I saw a human being sitting alone nearby at a stand that simply said "advice," like Lucy's psychiatric help for five cents booth, except this one was free. So, I asked the guy sitting there for some advice. He babbled something that didn't help me at all, so I asked if I should be more specific. He said, and I'm paraphrasing, "Yeah, that would help." Then I asked him a question that is too personal to repeat here. His advice was, and again I'm paraphrasing, to follow my heart and to heck with the consequences on others.

With no one else waiting, some small chat ensued and he offered me a drink. I confessed I forgot a cup (you should always carry around one at Burning Man). To make a long story short, he said he needed to take a piss and if I would watch the stand he would return with a drink for both of us. I said "You can count on me," and he went off.

A couple minutes later, a few guys showed up and asked questions like, "What should I do tonight?" and "What do you recommend to do here?" I explained I'm a noob to BM, but I tried to promote the drone show, which, to be honest, was not that great.
,
After those instant-gratification questions, a young woman of about 25 asked me, "What is the quickest way to enlightenment?" I tried to offer my two cents, but I don't think it was worth even one cent. I'm nowhere close to finding enlightenment, so what do I know? Then again, I don't think it can be found. If you want to really press me for my opinion about the big picture, it is that there is no meaning of life and that the best we can do is to distract ourselves from facing the abyss. However, I didn't want to depress her, so I said a few miscellaneous things and then the guy who was supposed to be answering these questions came back. I handed the question to him and he also just babbled something off the top of his head. I think the girl left unimpressed with both us.

After all of this, there was just one guy talking to god, so I formed a new line. After the guy was done I asked him what god said. He didn't come back with a clear answer. Instead, he mumbled something about not being able to explain it.

Then I picked up the phone. God came on a few minutes later. I said "Are you there god? It's me, Mike." I hope you guys get the reference, but god didn't seem to. Anyway, I went right into the big questions like, "What is the meaning of life?" and "Which religion comes closest to the real truth?" God just gave some ambiguous answers that seemed to be Jesus-like parables at the time. I walked away feeling confused and unfulfilled.

When I hung up the phone, I saw another guy standing, waiting for his turn. He asked me what I asked the previous guy, "What did god say?" I told him god was rather vague and I needed time to process the interaction. He thanked me for my honesty. As I went back to my bike, he picked up the receiver.

A week later, as I went back over the evening for about the 20th time, I came to the assumption that perhaps god was just reading off of a list of fortune cookie like statements that one could read a lot into but at the core are pretty empty. None of god's answers specifically reflected what I asked.

In the end, I think it was a good joke, at least in my case. You had me there. Meanwhile, I'll keep searching.

The phone booth image was taken from the video BURNING MAN 2018. You can see it at the 0:13 point.

Heck, I could have done better: How about the enlightened never focus on time?

No, I do not get the reference at all. Is it from Rainer Maria Rilke: Du Nachbar Gott?

If there are no phone wires in the middle of a salt encrusted lake where is the person you are speaking to located? It would have to be a cell phone call. So you were talking to someone who at the very least was in the shade while you were waiting at a hot dry dusty spot in the sunshine. And the only advice you needed was get out of the sun.

Are you there God? It's me Margaret! The Judy Blume book....that is the reference.

Oh, of course, says Fleastiff in a knowing manner as he heads off to Google in utter ignorance... (skulk, skulk, skulk).

I don't mike, I always took you for smarter than thinking that you would find enlightenment in the middle of the Nevada desert with a bunch of doped up artists, hippies, and Hillary supporters !! Lol.
Although I've wanted to go to burning man myself because I like parties and camping and bonfires, I would be expecting personal headaches from irrational emotional stammering when it came to philosophy(especially writ large).
... It's good to know that's what you got as I like when my logic-formed predictions are correct !! Lol !!
However, I may have an unfair advantage in my prediction in that I grew up in chicago and live in Austin Texas so I am accustomed to the incessant "nothing" of which libtardation and hippy-dom is full. Lol.
Glad you.had fun at least !! But did you at least ask a bunch of these snowflakes about the guilt everyone should have been feeling for their carbon footprint with all that fire(and fuel to get them to burning man), and the fact that all of that energy and money COULD HAVE been used to feed hordes of third-world children abroad and/or all the illegals that they supposedly love here in America ?!?! Lol !!
Nothing more fun than hitting emotionalists(libtards) where their hypocrisy is the most blatant... "Leave no Trace"[in the sand], but let's leave a big hole in resources[and supposedly the atmosphere/3rd world childrens' "breathing air"] to smoke dope and burn valuable building materials that could have been "huts for the homeless" in a selfish hedonistic worship session that pretends we're saving the earth[in their emotionalist/libtard minds that is...] Lol !!
I love it !!

Burning Man is not a political festival in any way. I fully admit that an enormous amount of energy is consumed there. Nobody ever claimed otherwise that I know of.

Why should aging hippies in California feel some sort of guilt about brats in the 'third world'? Third world countries can feel guilt about their own brats. I think the festival is attended by people who want to get away from incessant carbon neutral palaver.

Link above is for:

'Are You There God? It's Me, Margaret' the movie is coming

(CNN)Nearly 50 years after Judy Blume authored the popular young adult novel, "Are You There God? It's Me, Margaret," she's agreed to let it be made into a movie.

The book, first published in 1970, is about the life of Margaret Simon, an 11-year-old in the sixth grade, living in Farbrook, New Jersey. Margaret forms a secret club with three girls from her neighborhood and that's where they talk about typical issues that pre-teens face, from anticipating their periods to first bras and boys.