If it comes down to Comey's word vs. Donald's word, Comey ain't the one with the credibility problem....

Yeah, it's a terrific imbalance. It'd be amazing if they believed Trump's word over Comey's one on one. Even the majority of Republicans. Almost anyone is going to have that advantage against Trump.

Trump's going to need real recordings in his favor.
The Hall of Unverified Claims is a vast place with many shelves.
Romes

Romes
Joined: Jul 22, 2014
If the Dems were smart... they would pay off as many people as they needed to get one on one recordings of as many GOP members as possible even admitting to knowing there's "something up" with donald and that they don't want to pursue the issue with special prosecutor/etc.

Because then when it comes to light that donald has done something illegal, gets impeached, etc, through obstruction of justice all of the evil GOP's either hiding secrets OR protecting trump will also get persecuted... Shit, could take out dozens of them in one fell swoop... Drain the swamp, right???
Playing it correctly means you've already won.
777

Meanwhile, Paul Ryan was on last night saying, (paraphrase) No, we're not distracted from what we're doing; there's a whole lot going on in Congress, many bills going through the process.

Thanks for the warning, Mr. Ryan. This has been your plan since the day Trump got elected; do a bunch of stuff nobody wants done outside the rich and powerful while Trump holds the national attention.

Yes, Trump will try to martyr himself into glory. His most fervent supporters will see him as human sacrifice, without ever acknowledging the hypocrisy or the illegal acts. Alternative facts rule, at least for now.

What’s the Matter With Republicans?
https://www.nytimes.com/2017/05/19/opinion/whats-the-matter-with-republicans.html?ribbon-ad-idx=5&rref=opinion&module=Ribbon&version=context&region=Header&action=click&contentCollection=Opinion&pgtype=article

Below is Paul Krugman's quick comparison between the two political parties:

The Democratic Party is a coalition of interest groups, with some shared views but also a lot of conflicts, and politicians get ahead through their success in striking compromises and finding acceptable solutions.

The G.O.P., by contrast, is one branch of a monolithic structure, movement conservatism, with a rigid ideology — tax cuts for the rich above all else. Other branches of the structure include a captive media that parrots the party line every step of the way. Compare the coverage of recent political developments on Fox News with almost everywhere else; we’re talking North Korea levels of alternative reality.

And this monolithic structure — lavishly supported by a small number of very, very wealthy families — rewards, indeed insists on, absolute fealty. Furthermore, the structure has been in place for a long time: It has been 36 years since Reagan was elected, 22 years since the Gingrich takeover of Congress. What this means is that nearly all Republicans in today’s Congress are apparatchiks, political creatures with no higher principle beyond party loyalty.
Boz

billryan
Joined: Nov 2, 2009
Times is reporting the day after firing him,Trump called Comey a nutjob and told the Russians that the pressure is off the investigation, according to a transcript read by an American official.
That seems pretty close to admitting to obstruction.
The difference between fiction and reality is that fiction is supposed to make sense.
ams288 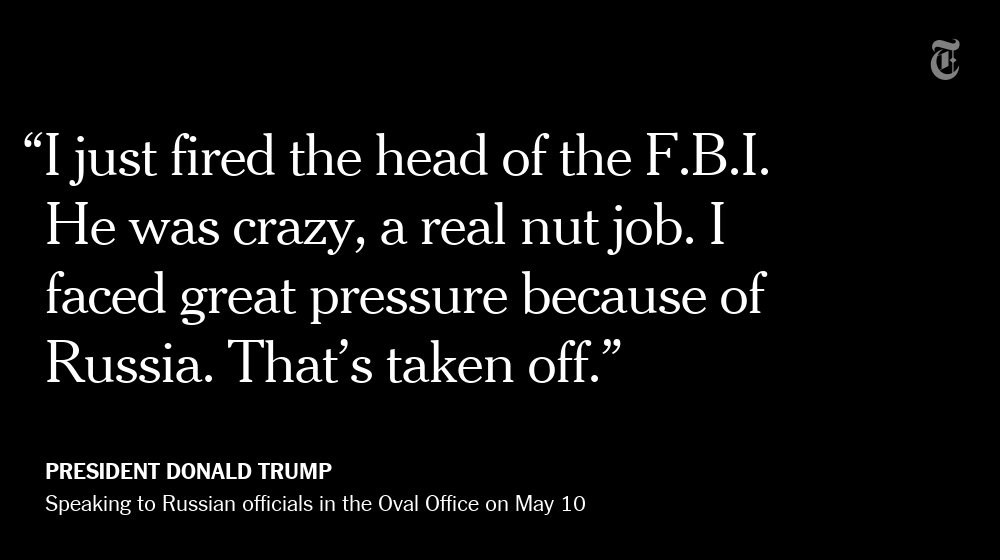 "I was really stressed that no one was investigating the connections I don't have with Russia. So I fired the head of the people who aren't investigating me."
billryan

billryan
Joined: Nov 2, 2009
CNN saying that a current Senior White House official is at the center of the FBI probe.
The difference between fiction and reality is that fiction is supposed to make sense.
777

Times is reporting the day after firing him,Trump called Comey a nutjob and told the Russians that the pressure is off the investigation, according to a transcript read by an American official.
That seems pretty close to admitting to obstruction.

It is difficult to prove obstruction with that statement alone. However, a case of STRONG of obstruction of justice can be built when that statement is combined with Comey's testimonies under oath, and with other statements of the racist, sexist, rapist, and scam artist Trump.

The racist, sexist, rapist and con artist Trump calling Comey a “nutjob” to our adversary Russia is an indication that Trump does not respect his country. His lack of respect and sympathy for Comey and other subordinates are troublesome.

The way racist, sexist, rapist and con artist Trump treats WH staffs, it would be very difficult for him to find high quality staffs.

Trump, for his part, is resentfully returning fire, blaming his underlings for his own mistakes, complaining that McMaster is a pain, speculating about firing and demoting people. This is a White House in which the internal nickname for the chief of staff is Rancid.

The organizational culture is about to get worse. People who have served in administrations under investigation speak eloquently about how miserable it is. You never know which of your friends is about to rat you out. No personal communication is really secure. You never know which of your colleagues is going to break ranks and write the tell-all memoir, and you think that maybe it should be you.

Even people not involved in the original scandal can find themselves caught up in the maelstrom and see their careers ruined. Legal costs soar. The investigations can veer off in wildly unexpected directions, so no White House nook or cranny is safe.

As current staff leaves or gets pushed out, look for Trump to try to fill the jobs with business colleagues who also have no experience in government. It’s striking that the only person who this week seems excited to take a Trump administration job is Milwaukee Sheriff David Clarke, who made his name as a TV performance artist calling the Black Lives Matter movement “black slime,” and who now claims he has been hired to serve in the Department of Homeland Security.
billryan

billryan
Joined: Nov 2, 2009
I believe an impeachment trial is closer to a civil one than a criminal one. The burden of evidence being much lower.
Having a secret meeting with the Russian Ambassador in the Oval Office, where he not only passes along code word secrets but says he fired Comey in order to relieve pressure on him not only sounds like obstruction but collusion, as well.

Somebody please convince me I'm wrong?
The difference between fiction and reality is that fiction is supposed to make sense.
RSS Feed