He also heavily criticized Obama for taking vacations, and promised he'd have no time to do so himself with all the winning he'd be doing.

All the lies he has told and this is the one you choose to complain about?
The difference between fiction and reality is that fiction is supposed to make sense.
ams288 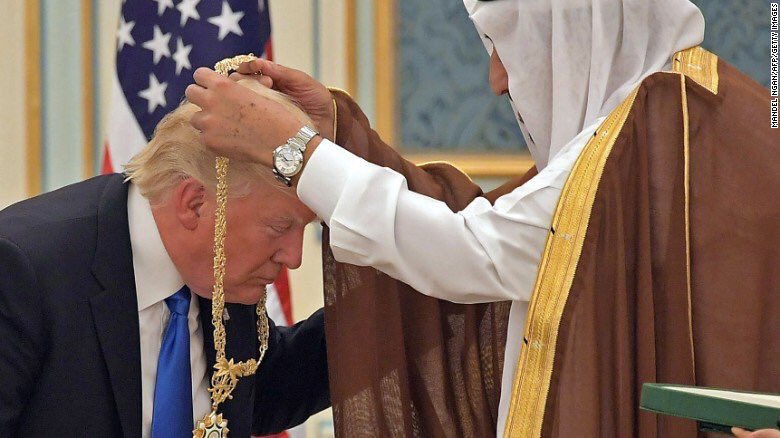 Ding Dong the Witch is Dead
MrV
MrV
Joined: Feb 13, 2010
The scary thing is that Trump looks a lot like my father.

Lions and tigers and bears, oh my!
"What, me worry?"
JohnnyQ

Sorry to hear that, did you at least get some of your mother's genes ?
Like the castle in its corner In a medieval game; I foresee terrible trouble And I stay here just the same
darkoz

Lions and tigers and bears, oh my!

If you do that must make you really MAD!
For Whom the bus tolls; The bus tolls for thee
Rigondeaux

What’s the Matter With Republicans?
https://www.nytimes.com/2017/05/19/opinion/whats-the-matter-with-republicans.html?ribbon-ad-idx=5&rref=opinion&module=Ribbon&version=context&region=Header&action=click&contentCollection=Opinion&pgtype=article

Below is Paul Krugman's quick comparison between the two political parties:

The Democratic Party is a coalition of interest groups, with some shared views but also a lot of conflicts, and politicians get ahead through their success in striking compromises and finding acceptable solutions.

The G.O.P., by contrast, is one branch of a monolithic structure, movement conservatism, with a rigid ideology — tax cuts for the rich above all else. Other branches of the structure include a captive media that parrots the party line every step of the way. Compare the coverage of recent political developments on Fox News with almost everywhere else; we’re talking North Korea levels of alternative reality.

And this monolithic structure — lavishly supported by a small number of very, very wealthy families — rewards, indeed insists on, absolute fealty. Furthermore, the structure has been in place for a long time: It has been 36 years since Reagan was elected, 22 years since the Gingrich takeover of Congress. What this means is that nearly all Republicans in today’s Congress are apparatchiks, political creatures with no higher principle beyond party loyalty.

From their perspective, there's nothing wrong with Republicans. They destroy the Dems at every level again and again, experiencing only the occasional, temporary push back when they go to far.

The question should be, if Republicans are so bad (which they are), what is so wrong with Dems that they keep losing to them?

Much of the answer can be found in Krugman. This article is a good example. We all fail. Winners look in the mirror. Losers point fingers, like Krugman is here. The Democratic argument has consisted almost entirely of finger pointing for years. They offer voters absolutely nothing, except, "we might, arguably, screw you slightly less," and outlawing large sodas. As a result, they are perceived as weak, amoral whiners.

And they can't even finger point about the worst stuff Republicans do, because they are on board with it. So they wind up with this, weird nonsense that nobody outside of the alternative reality of beltway wonk-tards gives a crap about.

Wow, Trump doesn't want to restart the cold war for no reason, as Dems seem to, That will really speak to voters.

Yes, Trump may have screwed himself here, because he is a clown. But, Dems won't capitalize on it long term, because they refuse to ask, "what's the matter with US?"

I guess it's working out fine for them too. Plenty of speaking fees. Retreats to Aspen. Jobs on Wall Street for their unqualified kids. etc. Why give that up just to win a few elections?
Boz

Lions and tigers and bears, oh my!

Could be worse, you could look like your "brother" that you have been accused of being a mouthpiece for.
gamerfreak

Said the guy who literally just signed the biggest arms deal in history with Saudi Arabia.

Pointing out this insane level of hypocrisy isn't even a story anymore. How half you people ever believed a word that came out of this man's mouth is astounding. Ya'll got absolutely conned and made the other half pay for your stupidity.
Ibeatyouraces

Ibeatyouraces
Joined: Jan 12, 2010
He's a decrepit, senile old man. Seriously, he can't even see that his wife is a man!! What do you expect?
DUHHIIIIIIIII HEARD THAT!
gamerfreak

He's a decrepit, senile old man. Seriously, he can't even see that his wife is a man!! What do you expect?

Hah, neither did Obama! Neither Michelle or Melania wore the customary head scarf when they traveled to Saudi Arabia, despite Trump's criticism of Michele for that decision. Clearly they both must be men.