In early October 2020 I heard of a reversible royal video poker game at the Red Rock casino in Las Vegas with an enormous jackpot. To be specific, it was a jackpot over $40,000 for a 5¢ denomination game. This would be equivalent to a win of 160,000 for 1. Remember, one must make a five-coin bet to qualify for the progressive. A reversible royal pays for a sequential royal flush in either direction (10-J-Q-K-A) or (A-K-Q-J-10).

On October 17, 2020 I paid a visit to investigate. I did indeed find a bank of four games with the linked reversible royal jackpot. It is located near the Starbucks in the food court (not to be confused with the other Starbucks by the gift shop). At that date and time the jackpot was at $40,389. There were six base games the player could choose from, all of which qualified for the jackpot, as follows. The return column shows the return without the reversible royal jackpot.

A jackpot of $40,389 for a 5-cent game is equivalent to a win of 147,722 for 1. Putting that and the rest of the pay table into the video poker analyzer at Wizard of Odds, results in the following return table.

The lower right cell in the table above shows a return of 105.22%. It should be emphasized that this return optimal strategy, including considering the order of the cards. 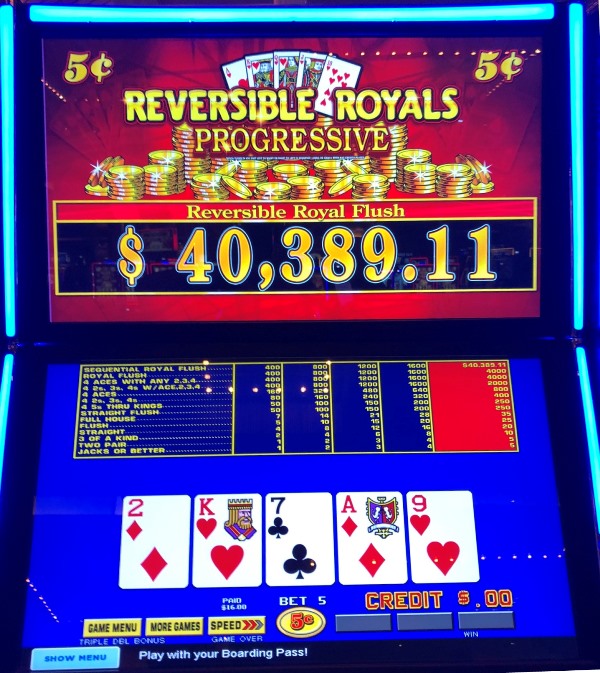 The image above is for the same jackpot on Triple Double Bonus.

My advice is if you have two or less cards are in position for a reversible royal, then don't muddy the waters with positional exceptions and play standard 6-5 Bonus Poker Deluxe strategy. That link will take you to the video poker strategy maker at Wizard of Odds for that game and pay table.

With four cards in position for a reversible royal, always go for the royal, even with a pat straight flush.

Assuming a playing speed of 1,000 hands per hour, the expected win of this play is $13.05 per hour. This does not include the value of points or that the meter will continue to rise as you play. The probability of getting a reversible royal is 1 in 1,475,066 per hand. Assuming the same playing speed, playing 24 hours a day, on average a reversible royal will come along once every 61.5 days. 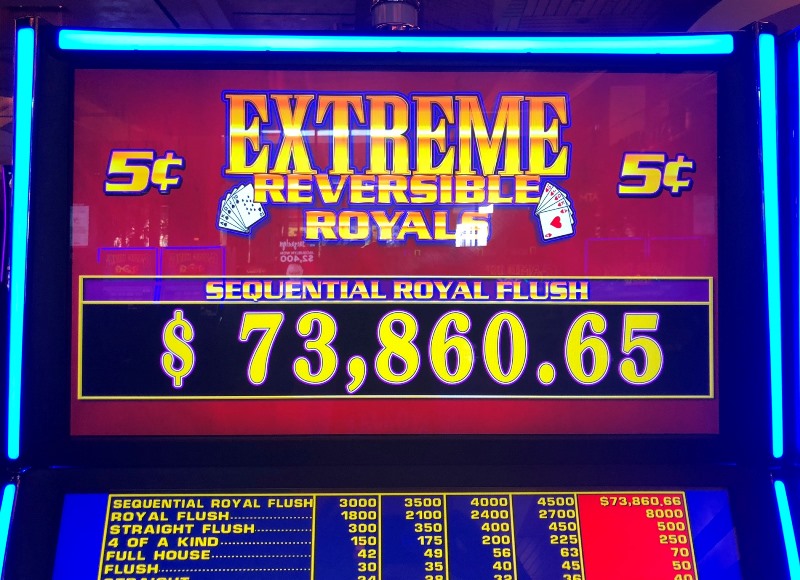 After this article was published, on October 20, 2020, a reader mentioned another 5¢ reversible royal game in the same casino with a $73,844 jackpot. Later that day, I returned to the Red Rock to investigate. It can be found near the entrance by the buffet. The bad news is that this larger jackpot requires a 10-coin bet, as opposed to a 5-coin bet for the $40,389 jackot. In other words, the ratio of the jackpot to bet amount is less. The ratio of jackpot to bet amount is 147,722. The good news is that the base pay tables were more generous. To be specific, the following table shows the base pay tables available and the return before considering the jackpot for a reversible royal.

Discussion about this article in the forum.

Any casual player would do well to just figure out and add in a few of the most critical 2-card SRF strategy changes.