The Tampa Bay Buccaneers have officially signed the controversial and extremely talented wide receiver in Antonio Brown to a one year deal. Brown is currently not available for reinstatement as of now. He will not be eligible for reestablishment to play in the National Football League until his most recent suspension is finished, which is set to conclude following week eight action of the NFL.

Antonio will not be able to practice or play with the Tampa Bay Buccaneers until his current suspension is over and he is reinstated to play by the National Football League, but the Bucs plan to have Brown participate in meetings as well as meet with the strength staff as soon as he passes the COVID – 19 testing protocol. The Tampa Bay Buccaneers are anticipating that the superstar wide receiver will make his first start with the organization week nine of the 2020 – 2021 NFL season against the New Orleans Saints. 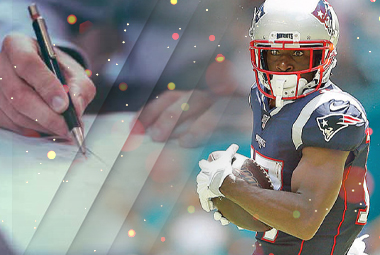 The one-year contact Brown signed with the Tampa Bay Buccaneers is comprised of a base salary of $750,000, and there is no guaranteed money included in this deal for obvious reasons involving Antonio’s unpredictable off the field incidents. However, there are a number of incentives built in to this one year agreement.

Brown will receive an active roster game bonus of $31,250 per each of the eight games that he is eligible for which would total $250,000 for all eight possible games of the 2020 – 2021 NFL regular season. There are also four incentives that all revolve around the Tampa Bay Buccaneers making the 2020 – 2021 NFL playoffs.

A playoff birth plus 45 receptions will earn Antonio an additional $250,000, a playoff appearance plus 650 receiving yards would add another $250,000, and the Bucs clinching a playoff spot plus 6 touchdowns will provide Brown with a supplementary income of $250,000 as well. If the Tampa Bay Buccaneers win the Super Bowl this season the troubled wide receiver would profit a nice sum of $750,000. The total maximum value of his one year contract is valued at approximately $2.5 million assuming that Brown hits all the above mentioned incentives presented in the new agreement.

Is the Juice Worth the Squeeze

When Brown is behaving himself, working hard, and focusing on being the best football player that he can be Antonio is one of the best wide receivers in the National Football League, but when he is causing distractions, feuding with his teammates and coaches, and getting into trouble off of the gridiron he can be a total liability to himself as well as his team.

Lately he has proven to not be worth all the issues that he has caused. Only time will tell if Brown is finally ready to be an asset to his organization and help contribute to the Tampa Bay Buccaneers continue winning throughout the second half of the 2020 – 2021 NFL season. With Tom Brady’s old age and his short term contract with the Tampa Bay Buccaneers, their window for winning a Super Bowl is only going to be open for small amount of time. Hopefully they made the right decision by signing a high risk high reward player such as Antonio Brown.

"Certainly I'm happy for Antonio to get an opportunity to resume his career," the Tampa Bay Buccaneers QB Tom Brady stated. "He's put a lot of time and energy into working on a lot of things in his life, and I know he's excited to play football. So everyone's gonna earn a role on our team, and I know that's his mindset too. We'll see how things come together as we get into our game-planning [and] we get into the second half of our season and he's available."

The Tampa Bay Buccaneers head coach Bruce Arians expressed, "(That he is going to) let the court system handle it" and "if it's found out to be true, he won't be with us."

"No. He's his own individual," Brady proclaimed. "Everybody has the opportunity in life, and I'm just happy that he's got another opportunity to play in the NFL. ... I love playing football. I know he does too. He's joining a group of guys who are extremely hardworking, extremely selfless. ... And anytime you can add another player to that mix, certainly of Antonio's caliber, it's only gonna help all of us grow, be better. I'm excited to get on the practice field and see what we can make of it."

"I think he's matured, and I believe in second chances," says Arians. "Everybody wants to say that Tom picked him. Tom didn't have anything to do with it. This was something Jason and I had been talking [about] for a couple weeks, ever since the injuries to our other guys. When the time was right, would we see if we could pull the trigger and fit him in to what we want to get done? And we'll see. If Antonio does what I think he's gonna do, I think he's gonna be fine."

Brown’s former trainer witnessed Antonio, "Naked, holding a small towel in his hands over his genitals." 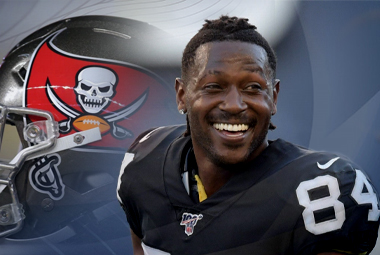 "He's a tremendous football player," Brady goes on to say. "I played with him for a brief period of time. Looking forward to working with him again, to see what role he can come in [and play]. He's a very hardworking guy. ... We're all gonna go out there on the practice field and do the best we can do. And we're gonna see how it all fits together. There's a lot of hard work ahead. None of it just magically happens. I think we realized that early in the season, we put a lot of new people together, and we've gotta figure a lot of things out in a short period of time. We're fighting against continuity of a lot of other teams, a lot of other coaches. Bruce has had tremendous patience with me, watching me grow in the offense. I totally appreciate that and respect that and feel like I'm getting to a more comfortable place."

"I think just really giving him a blank canvas," Scotty Miller stated. "He's been suspended. He's done all the things the league's had him do. So just come in and treat him like anybody else who comes in. Give him a chance, just like anybody. Get to know him. I don't know too much about his past -- I didn't research him or anything like that. ... But just excited to meet him. I think we all are. One thing I have heard about him is he's one of the hardest working guys around. So I think we're just excited to have him. And I think he's gonna do a good job."

"It's an insurance policy," Arians pronounced. "When we don't have Mike [Evans], and we don't have Chris [Godwin -- why not have another Pro Bowl player, caliber player, that's available that fits our cap, and fits everything else, so why not? We have good players. You can't have enough of 'em. In Chicago, we got one of our top guys [Evans] out there on one leg. Why not have another one?"

"I think Antonio definitely has taken those steps [in the right direction], and like I said, nobody's perfect," says Russell Wilson. "From the conversations I've had with him, he's really been remorseful and he's been humbled along the way. Like I said, I pray that he can continue to grow, just like anybody."

"I think the reality about Antonio is he is one of the best players to play this game obviously," Wilson explained. "I think that he has always been a special player in terms of [on] the field. The reality with Antonio is, he's had some tough moments in his life, especially as of late. I think he's gone through a lot of things he wishes he could take back and do, and just not say, whatever it might be. But I think he is a special player, for sure. I don't know what's going to happen with him or not. I don't know how serious it is us getting him or not. But I do know that obviously he can play some football. I think that's the thing. I've developed a personal relationship with him, and not everybody is perfect. And I think that's the reality, none of us are. So hopefully he gets to play football again."

"You guys know me better than that," Wilson replied. "I think you know me better than that. I think that he's obviously made some mistakes along the way. There's been a process for that and he's had to deal with it and go through it. I pray for anybody, honestly, that goes through anything. That's just me, that's my nature personally. I never wish anything bad on anybody."

"I think with Coach [Pete] Carroll, I think with the teammates that we have, the men that we have and the growth, I think if he does play football, I think this is a great place if he does play again," Wilson expressed. "I think this is a place where he'll grow a lot as a man too, as well. And I think that we're going to continue to try to help anybody who walks in this locker room as you guys know. ... That's just part of our culture is trying to help people. ...

"So I think it's not just about the games, it's not just about winning and stuff like that. It's also developing and talking and growing as men and just learning from our previous experiences and everything else, too. ... If he does come here, hopefully he could be a great teammate with us and for us and be along the way. If not, then we've got a lot of great players and we've got some guys that can really make some great plays too as well. We've been doing that all year."