On Monday, December 20th, 2021 the Tampa Bay Buccaneers announced that their speedy big play wide receiver, Chris Godwin, suffered a torn ACL during last Sunday night’s game against the New Orleans Saints in which the Saints defeated the Bucs with a final score of 9 to 0. Godwin will have to miss the entire rest of the 2021 – 2022 NFL season including the NFL postseason. 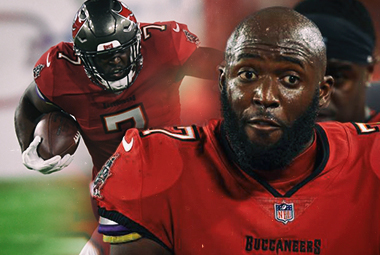 Just one day later the head coach of the Tampa Bay Buccaneers, Bruce Arians, was visibly frustrated as he fielded questions from the sports media world after he publicly disclosed that their football team will also be without the services of their strong and reliable running back, Leonard Fournette, also for the remainder of this season with a hamstring injury, but Fournette should be back and hopefully healthy for the upcoming NFL playoffs. Leonard endured his hamstring sprain during last weekend’s Sunday Night Football (SNF) game vs. the New Orleans Saints.

The Tampa Bay Bucs have decided to sign the former NFL free agent and star running back, Le’Veon Bell, to their active roster in attempt to reduce the impact of losing Fournette last weekend. Bell will be the Buccaneers secondary rushing threat following their starting running back at the moment, Ronald Jones.

Also, the Tampa Bay Bucs best as well as most productive wide receiver, Mike Evans, is currently sidelined with a hamstring injury. Evans is not anticipated to be out for very long, but we all know how hamstring injuries can linger and negatively impact a player on the field if they are not allowed to heal properly. Mike pulled his hammy during last Sunday night’s loss to the New Orleans Saints as well.

These are just several devastating major injuries to some of the Tampa Bay Buccaneers best offensive weapons for their all – time great and legendary veteran quarterback, Tom Brady, to distribute the football to whether rushing on the ground attack or passing to through the air.

Below is the full and up to date injury report for the 1st – place (NFC South division) Tampa Bay Buccaneers. The Bucs have compiled an overall record of 10 and 4 throughout the 2021 – 2022 NFL regular season in which there are only 3 – regular season games remaining for each football team and then it is NFL playoff time!!!

The head coach of the Tampa Bay Buccaneers, Bruce Arians, stated: "You feel bad for him because he was having such a great year, and the type of hit it was -- totally legal but I think that's one of the things we have to look into in the offseason. We're so concerned about hitting people in the head, that we're getting a lot of knee injuries now because of that type of tackle. But it is legal and wasn't a bad play at all. But yeah, I just feel bad for Chris.

“It's his time now to do what happened for Leonard last year when he got hurt. I've got all the confidence in the world. He ran great, caught the ball good, and I think going forward, it's his job right now, Arians goes on to say. We'll wait and see. I think BP should have a chance to get back. Don't know when. And then we'll start looking at all the pieces and put the game plan together. I'm OK with what we have now."