The star wide receiver of the Oakland Raiders, Antonio Brown, has told the Raiders that he will not play, and will retire from the NFL altogether, if he is not allowed to play with the helmet that he has been using his whole career. That helmet is 10 years old, and it has been banned by the NFL. 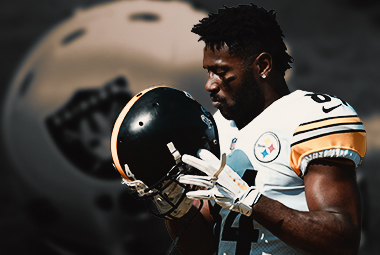 The helmet in question is said to be the Schutt Air Advantage model that has been discontinued and is no longer manufactured. It is no longer certified by the National Operating Committee for Standards and Athletic Equipment. The NFL has a policy against allowing players to wear a gear that is not approved by the Committee for Standards and Athletic Equipment, and it does not certify helmets that are over 10 years old.

The Oakland Raiders pro bowl diva wide out claims that the new helmets impede his vision as they protrude out further than the older models do. Other veteran players such as Tom Brady and Aaron Rodgers say that they do not love the new helmets, but they are not threatening to retire from football if they can’t use the ones they are used to wearing. There are around 30 different models of head gear that are certified for use in the NFL at the moment.

Brown filed a grievance with the NFL asking to wear the helmet he has worn his entire career playing pro football. He and an independent arbitrator had a two-hour-long conference call on Friday, August 9th, 2019. Also, on the call with the arbitrator in Philadelphia were league officials, player representatives, and representatives of the National Football League’s Players Association.

They listened to Brown’s argument in which he spoke about how the old helmet made him feel safe even after an illegal hit by Vontaze Burfict in the playoffs a couple of years ago. The committee stated a decision on the matter would be released as early as next week. On Monday, August 12th, 2019 the arbitrator explained that Brown lost his grievance against the NFL. This decision means that he will have to find a new certified helmet in order to play again.

The former Pittsburgh Steelers wide receiver, has others issues that are currently keeping him off of the football field as well. While in France around a month ago, Brown suffered severe frostbite on his feet due to not wearing the proper footwear when receiving cryotherapy treatment. He has been getting treatment from specialists regarding his damaged feet, and hopefully will not have to miss any games of the 2019-2020 NFL regular season.

"I support this guy. I think that's what needs to be said," says head coach of the Oakland Raiders, John Gruden, after a preseason game Saturday against the Los Angeles Rams. "I don't know what anybody's writing or what anybody thinks, but this foot injury wasn't his fault. This was a total accident. It really wasn't his fault, and it's a serious injury. I know that some people are [joking about] it, but it's really not a laughing matter. The guy is hurt, he didn't do anything wrong, and the helmet thing is a personal matter to him."

"He has a strong feeling about what he's worn on his head, and we're supporting him," explained Gruden. "We understand the league's position as well, so we're in a tough spot, and we hope Antonio is here soon because he's exciting to be around. I'm excited. I've got some plays for him. I hope we can start calling them."

"I have a lot of confidence that he's one of the premier competitors that I've ever been around," he added. "And I've got a feeling he would play with no helmet -- that's how much he loves to play. But I'm not going to put words in anybody's mouth. We're going to support him, and whatever his decision is, we'll stand by it. But we're confident that he's going to be a huge factor for the Raiders for years to come.

"It was a total accident and injury that he's looking to get right from, and hopefully, with all the people that have seen it, that he's gotten it cured, and he's ready to roll."

"While I disagree with the arbitrator's decision, I'm working on getting back to full health and looking forward to rejoining my teammates on the field," says Antonio Brown. "I'm excited about this season appreciate all the concerns about my feet!"

"Derek Carr is the type of quarterback that needs -- he'd be great in a Gase system. He needs his reads defined quickly, early in the down. He's a comfortable passer, he's a very talented thrower when he's comfortable," Andy Benoit of Monday Morning Quarterback explained. "The problem is when you go out and get an Antonio Brown, you're paying for Brown -- and Tyrell Williams is the same way, the guy they got from the Chargers -- those guys win at the deeper intermediate levels. They win on big routes, post patterns, go routes, improvised routes if you get outside the pocket, Brown's always very good at uncovering, you have to be if you play with [Ben] Roethlisberger.

"That style of wide receiver doesn't match up to a quarterback that needs to have the ball out quickly and find a rhythm that way. I'm not saying you can't throw the ball quickly to Brown -- we know the Steelers did a ton of receiver screens -- but that's not a foundation to your offense."