This aggressive suspension was in regards to the hit that Burfict placed on the Indianapolis Colts tight end, Jack Doyle, in the second quarter of the game on Sunday, September 29th, 2019. The Raiders won the contest against the Colts 31-24 despite the early ejection of one of their best defensive players. 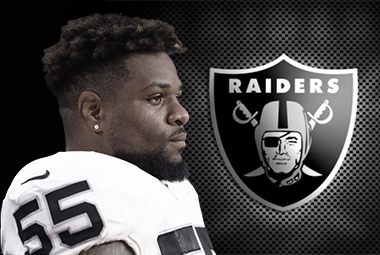 The illegal hit was penalized just prior to Burfict being ejected from the ball game. The hit involved Vontaze leading with the crown of his helmet as he launched into the helmet of the Colts tight end, Doyle, after a reception over the middle of the field. I believe that Burfict and his agent will appeal this decision by the National Football League soon.

There is a long list of illegal infractions that the Oakland Raiders linebacker, Burfict, has been penalized and suspended for going back to his time with the Cincinnati Bengals. He has always had a reputation for being a dirty football player over the course of his NFL career.

"There were no mitigating circumstances on this play," says the letter from NFL vice president of football operations, Jon Runyan. "Your contact was unnecessary, flagrant and should have been avoided. For your actions, you were penalized and disqualified from the game. Following each of your previous rule violations, you were warned by me and each of the jointly-appointed officers that future violations would result in escalated accountability measures. However, you have continued to flagrantly abuse rules designated to protect yourself and your opponents from unnecessary risk."

“Your extensive history of rules violations is factored into this decision regarding accountability measures.”

“I just got tackled,” Doyle explained. “I’m sure it looked worse than it was. I didn’t really feel anything from it. My helmet protected me.”

Burfict’s agent, Lamont Smith, stated, "The 12-game suspension is excessive and the play that triggered the suspension was a football play."

"It's a tough decision, it's a tough call. I think it was a flag," says Oakland Raiders head coach Jon Gruden. "It was very well-documented that the league was going to review those plays this year in New York City. So that's what happened and I'll wait to hear what their reasoning was. But it was a penalty, he went in there with his head down, it was called and, unfortunately for us, it was an ejection."

“I was just thankful the league took the action that it did, and (I) support the league and the decision,” Indianapolis Colts head coach, Frank Reich, expressed. “I did have a reaction yesterday. When someone does something like that and attacks one of your players — that’s just not supposed to be in the game. Then when it’s against one of your players, you naturally have a reaction. I’m just glad they did what they did at the game and the follow-up action seems very appropriate.”

“I play a physical position, which is middle linebacker, outside linebacker. That’s physical,” Burfict explained. “I can’t go in there playing patty-cake. If I go out there playing patty-cake, then I’m going to be getting run over. I have 300-pound linemen, 300-plus pound linemen coming at me, trying to block me. If I play soft, then I’m not doing my job. I could see if I played quarterback or kicker or punter, then yeah you can be, I wouldn’t say soft, but you know what I’m saying. I play a physical position to where I have to put my jockstrap on right, put my shoes on right, put my cleats on right and come out ready to play physical.”

+... he has always had a reputation for being a dirty football player over the course of his career...'''
So I would wonder about why he was hired as well as why he was fired. How much of a role did his conduct play in his getting hired in the first place.

By the way, I agree with his patty cake analogy, but patty cake has rules and so does football.

Perhaps his hit on Antonio Brown is what makes A.B. so kooky today?

I believe Antonio Brown's 'kookiness' is limited to a different kind of playing field.