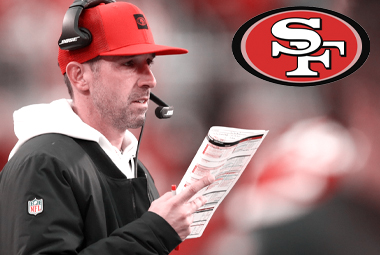 The Rebuild of the San Francisco 49ers

Ever since coach Shanahan began working with the 49ers, the franchise went from being one of the worst teams in the National Football League to one of the best organizations in the NFL. During the 2019 – 2020 NFL season Kyle led the San Francisco 49ers to a regular season record of 13 and 3. The Niners ended up making it all the way to Super Bowl LIV before finally losing in the postseason to the potent Kansas City Chiefs team led by their young superstar quarterback, Patrick Mahomes.

One of the Most Progressive Head Coaches in the NFL

Kyle Shanahan is also one of the most progressive head coaches currently employed in the National Football League. Out of the 23 assistant head coaches of the San Francisco 49ers squad 11 of them are people of color or women. Their defensive coordinator, Robert Saleh, is considered to be the first Arab – American coordinator in league when he was hired in 2017.

Shanahan is considered to be one of the NFL’s best offensive minds in the game these days. His exceptional play calling ability as well as creative input continues to amaze all that follow the National Football League at this time. Hopefully he continues to have success as the head coach of the San Francisco 49ers over the course of the next several seasons.

"There's a lot of work in front of us. There's certainly not a lot of time to celebrate on just making a hire," the San Francisco 49ers owner Jed York explained.

York goes on to say, "I think in talking to Kyle, he was very direct with what he wants to do with the team and how he wants to build this thing and get it right. He knows that he's going to have the leeway to do that and he's going to have the time to do that, and we need to make sure that we commit to building something that we're going to all be proud of when it's all said and done."

"One of the great and liberating things for me, and I think why this thing came to fruition, I made a big deal that this stay quiet. First of all, you know what I was doing? Part of the rumors are things fly out of that building. And I wanted to see if I could trust this person. And so that was part of my thinking," says the San Francisco 49ers general manager, John Lynch.