Well so far you get Jax and the Chi-town bet - not bad - just need the Cards for a sweep.

PIT being a fraidy cat and punting from BUF 35 on 4th and 4 led to the undoing of my 4-team (PIT, NE, NYJ, BAL) parlay. Yes all favorites. Should have come in if PIT wasn't fraidy cat :) After that punt they did nothing and should have lost. But my 4-team teaser on the same teams came in so that's something.

what's with the Cardinals? Players took San Fran and threw the game?

Last night I was at the Red Rock with a friend. We were challenging the cocktail waitress to trivia questions and making side bets if she could produce the answers. Another player at the table jumped in on the action too. At about 1 AM I was ready to call it a night and gave her a chance at a big tip. My offer was $25 for each of the gang names from West Side Story. She took about one second, and then said, as if it were easy, "the Jets and the Sharks." Dang!

What is really amazing is I offered the same gal $50 about a year ago for this one, "Who said 'I have not yet begun to fight?'" She got that one too.

Was that good ol John Paul Jones? As in the Scottish JPJ that was a Captain in the US Navy and formerly a pirate.

Correct! The Bonhomme Richard vs the HMS Serapis. The captain of the Serapis was knighted for the gallant defense of his ship. I've read that when Jones heard of it he proclaimed "if we should meet him again, I'll make him a lord".

The Mon Ami Gabi makes a wonderful cocktail called the "French 75". I offered our waiter at dinner an extra $10 on his tip (great meal , great service) if he could identify the origin of the name; and while a nice young man, he was not a military history buff. Anybody, anybody?

But the question is, did you get maximum value for your entertainment budget?

Oh, absolutely. We had a table right on the railing of the outdoor terrace. The weather was perfect and we watched the crowds and the Bellagio fountains as late afternoon turned to dusk and all the neon came on. Got out of there for less than $100 for two including drinks so, yeah. Good value.

No Calder, The 75 refers to 75mm. The bore of a French field artillery piece from about World War One. Fairly rapid fire and its recoil-absorbers meant it did not have to be re-positioned after each shell was fired.

In the age of sail, a ship of the line would be referred to mainly by the weight of the projectiles its gun fired and also at times by the number of gun decks it had, since the main weapon was its broadside, a discharge of all canon that would bear and were clear of the water.

Sharks and Jets... thats easy. When you're a Jet, you're a jet all the way from first cigarette to your last dying day.

Now as to "Struck? I have not yet begun to fight!" Jean Paul probably did indeed say that. Much of our history books are full of utter nonsense though. Millions for defense but not one cent for tribute may be an admirable statement, but the poor guy that was attributed to always maintained he said no such thing.

Fleastiff wins! The French 75mm field piece may have been the first of its kind because of its recoil absorbtion system. As to 'fighting sail' ships were rated by the number of guns on the main gun deck(s); thus, HMS Victory(104), Santissima Tinidad(120), USS Constitution(44). Sorry to drag the thread so off course, my enthusiams get the better of me.

I do a simuler thing to random people for $20 they have two chances.. the first is to name me all 7 of the 7 deadly sins OR all 7 of the 7 heavenly virtues. Nobody has ever been able to remember all seven. The second is a very simple geography question that is based on a technicality.

To date Ive never lost that $20 and still carry it around on me for the challenge. :)

I've a hunch that a lot of the people posting here would be killer Trivial Pursuit players.

You want the real killer in Trivial Pursuit... check out the declarations of war on the Empire of Japan after the attack on Pearl Harbor. I'm just waiting for that question to come up in barroom trivia: The United Nations of the Navajo and the USA.

For those who think advertising doesn't pay, I often say: There are ten mountain peaks in Colorado higher than Pikes Peak, name even one of them. It was a comment about advertising but one Trivial Pursuit nut actually was able to name them all!!

FleaStiff, I knew that one! The biggest gun of ww1 was not the Big Bertha, btw; it was the French 520 rail gun. Big Bertha was notable for its range.

Big Bertha? Rail Guns? They were monstrously slow to fire. Fusiliers were soldiers supposedly detailed to protect canoneers but actually deployed to prevent desertion by canoneers. The way to stop a siege gun was to go after the gunners. The rail guns were marvels of engineering and military stupidity.

Trivia contests in bars: Great fun, but often the waitresses are a few chapters ahead of you. Some of those Tray Lizards have masters degrees. They are not just babes in low cut costumes toting booze around all night. Many of them can do truth tables and give you an analysis of all those The Tribe Who Never Lies and The Tribe Who Always Speak Truthfully puzzles.

Now as for the John Paul Jones quotation and the Sharks versus the Jets questions, I sure would hate to run into anyone who could NOT get those right while sober, but realize that while drunk things might vary.

My sister put herself through grad school at Notre Dame by waiting tables. Yeah, that WW1 stuff, fascinating time in military history. I don't think she'd have gotten the French 75 question, but then again, she hasn't spent hours looking at exhibits of shell art, either.

I'm delighted at all the comments, as well as the post about Croupier's trivia challenge. I may put something together myself as a warmup.

By the way, I went back to the Red Rock for dinner yesterday and ran into the same cocktail waitress. So I confronted her and asked "How did you get that?" She said that she went to Catholic school and they put that musical on lots of times. Shoot, just my luck. Great gal though, if I must throw away $50, I'm happy it was on her.

I spend too much time in the local Buffalo Wild Wings, just to play their NTN / Buzztime trivia games.

Obviously, I never get the question on the French 75 correct...

So, what would be good some gambling or casino related trivia questions ?

For example, I liked the post from MathExtremist that the sum of the #'s on a Roulette Wheel is 666.

And how about this one: What did Wayne Newton leave at the airport in Michigan.

What did Wayne Newton leave in MI? His voice, maybe? Cause its certainly gone..

Here are my picks for week 11. You can see I made the Chi +1 pick in my Gaming Show pictures post before the game.

As mentioned before, I'm in a handicapping contest with some friends and I'm in contention to win. Lest they read this blog, the rest of the season I will likely have to post my picks Sunday morning.

I made the news again

I can only hope Pennsylvania and Delaware hold out on the Blackjack front, but I agree with you, I think since they are not making a "healthy" profit, they will argue they need H17 and Crapjack to survive.

I went straight to the link to make sure it wasn't that Atlantic City Wizard of Odds trying to ride your coattails again.

The show this was smaller than past years. Not small table game companies did not make an appearance. Very few independent game inventors were there. However, we did see the return of Prime Time Table Games. Here are a few pictures from the show. 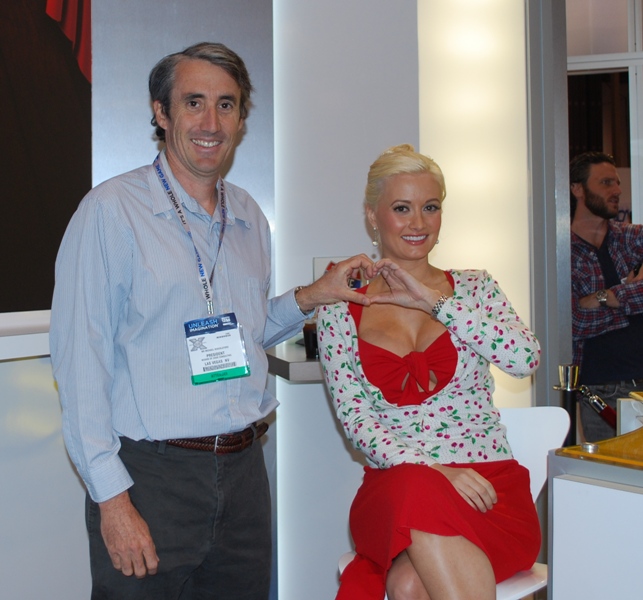 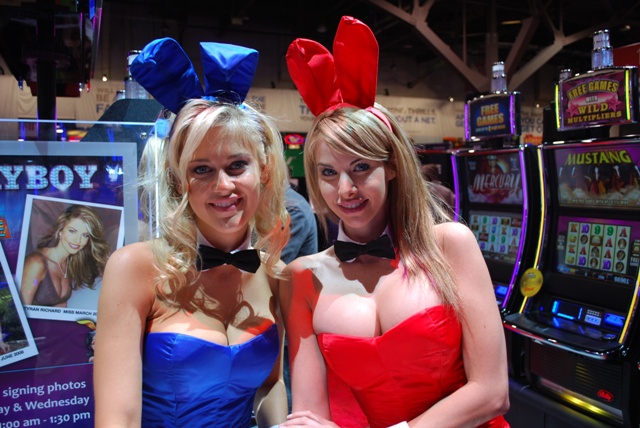 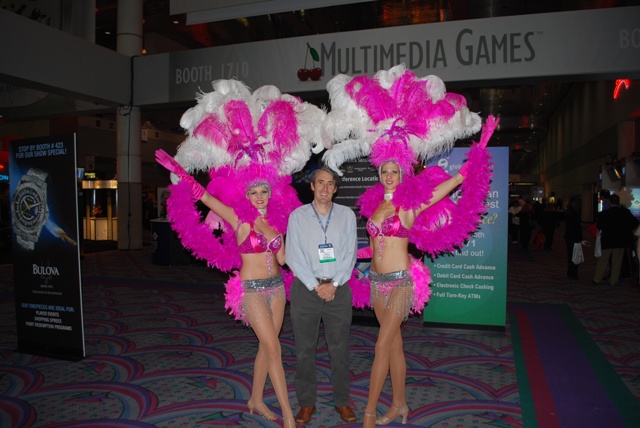 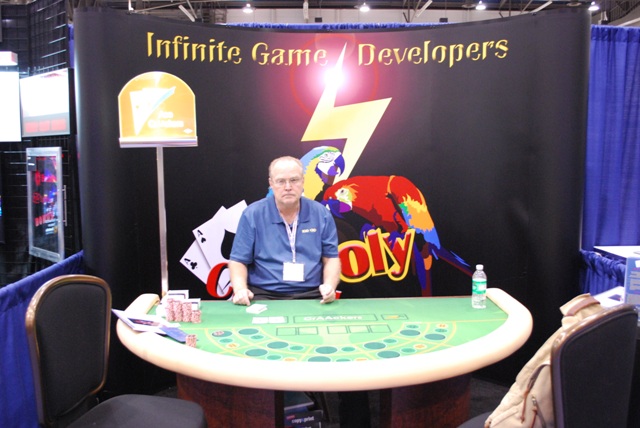 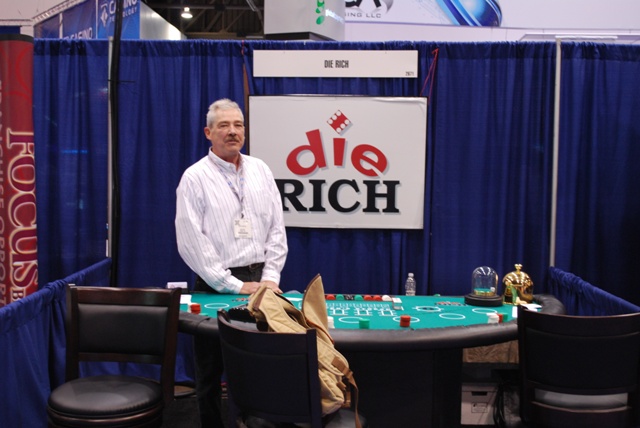 OK, Wizard, some time back, you posted a photo and asked whether anyone could identify the "T" hand gesture by a group in Salt Lake City. (Did you ever get a definite answer to that one?) This time, I am the one who has to ask the meaning of the dual hand gesture in the first photo.

No, I never did get the "T" question definitively answered. About the hand gesture with Holly, that is supposed to be a heart! It was my idea. At first Holly didn't understand my request, and made one with both her hands.

First a photo of you with some eye candy, making a nod to the T sign thread.

The a couple Playboy bunnies. Nice.

Then you with a couple show girls. Also nice.

Ahh, thanks. Guess I'm just an out-of-date geezer -- high-5 is still a new-fangled thing to me. I have seen a nice photo (taken my a young, graphic-arts neighbor of mine) showing a clearly-pregnant lady making a two-handed heart symbol over her bare abdominal bulge -- the photo was cropped to show only the hands and a short portion of the torso. That gesture was formed with two index-finger tips touching and pointing downward in a V, with the thumbs slightly bent and touching at the tips.

Sorry for that rough transition.

Yes. New game developers should smile more, have more inviting positioning of the chairs, not barriers to seating.

And even those "one man booths" should be able to have a pretty girl there and a plate of Hershey's Kisses or something.

Hire a knock out beauty to sit at third base and play the game, you will get visitors stopping by the booth!