Actually, I did not know that. They still manage to build some pretty tall buildings there. Perhaps at some deeper point, that they dig to, the ground gets harder.

The newest 800' tower that is currently being built in Mexico city, has a substructure that reaches down over 160'. I don't know what the standard is around the world, as I assume it varies quite a lot depending on how deep you have to go to hit bedrock.

The Paseo de Reforma is built on a section of Mexico City that was not underwater in historical times. I suspect it would be impossible to build a skyscraper at all in the reclaimed sections of the city.

The construction of the Drenaje Profundo began in 1967. It is a network of several hundred miles of tunnels, at a depth between 100 and 800 ft. The central tunnel has a diameter of 21 ft and carries rain water out of the basin. This work allowed the development of the subway system, which began service on September 4, 1969.

In 1629 a massive flood kept most of the city underwater for five years. The Indian population had dropped from an estimated 25 million before the conquest to 1 million by 1605. Had the Spaniards relocated the city in 1629, then the future might have been different.
Wizard
Administrator

Wizard
Joined: Oct 14, 2009
This is all very interesting. Is anyone worried a huge section of the city might fall into an enormous sinkhole? It seems to be dangerous to suck water out of groundwater if it isn't necessarily being replaced.

Where is Nareed? Certainly he knows a thing or two about this.
It's not whether you win or lose; it's whether or not you had a good bet.
Nareed

Does this groundwater explain where Mexico City gets its water from? I brought this up before, but I've always thought the placement of Mexico City was rather strange, being far from any natural source of water.

As Paco pointed out, Mexico city was a source of water.

But the part the Aztecs built up as Tenochtitlan occupies only a small portion of today's city, expecially given the Metro area in mexico State. As you get away from the center, the aquifers come to an end and the soil is solid bedrock. The quake of 1985 did very little damage in the solid areas, while it leveled the ground-water areas. I'd like to see an overlay of Tenochtitlan vs the 85 quake damage maps.

At least as near as I can tell. Generally, most of the US population is close to the coasts and that of Mexico is inland. I've always been puzzled by that.

It is rather odd. Most cities are located alongside rivers or lakes. The only "rivers" left in Mex City are thsoe carrying sewage out.

Did you have a chance to see the Viaducto Miguel Aleman? It's on one route to the airport. It's a very narrow freeway three lanes wide each way, but the lanes are narrower than they should be. The median is an an enclsoed sewage river.
Donald Trump is a fucking criminal
Nareed

The Paseo de Reforma is built on a section of Mexico City that was not underwater in historical times.

Parts of it. The office tower in the Wizard's photo is in a dangerous area. So is the Torre Latinoamericana, which until recently was the tallest building in the city. It suffered no damage to speak of in the 85 quake.

The current tallest building is La Torre Mayor, also in Reforma, but much farther northwest and in a very stable area (near Polanco)
Donald Trump is a fucking criminal
Wizard
Administrator

Here are some more pictures from the Zócolo in Mexico City. 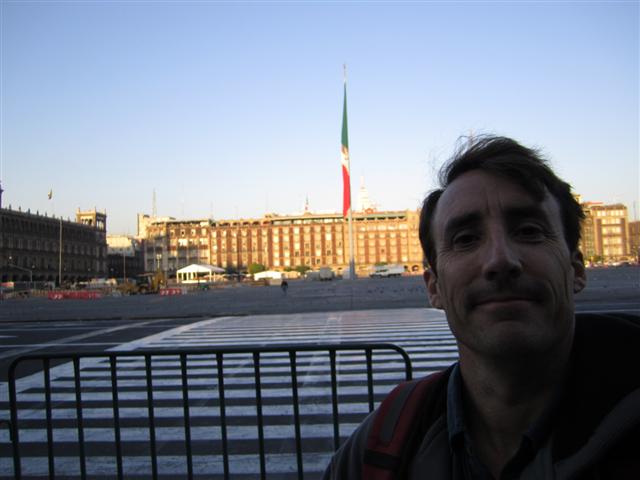 Based on the way the sun is hitting at this early hour, about 6:00 AM, this should be the west side. According to my map this is different adjacent buildings, two of them hotels. 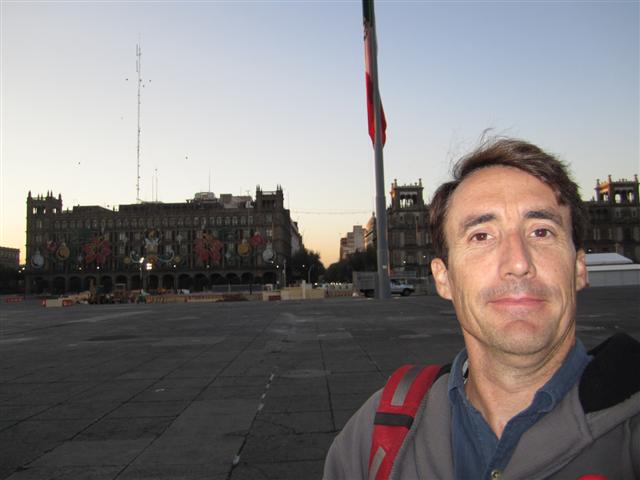 The building on the left is a department store. The one on the right is the mayor's office.

As you can see the area in the middle of the square was closed, for putting up Christmas decorations.

The word zócolo means "stand." Stand for what?, you might ask, it looks like an empty square to me. According to Wikipedia, the official name is Plaza de la Constitución. The reason they call it the Zócolo is there were plans to build an independence monument there, but they never got past the zócolo (base). So, I suppose that is what people called it, and the name stuck. When I was there I didn't even notice a base for anything. Perhaps they gave up, removed it, and just made it an empty square. I thought every city in Mexico is supposed to have an empty public square anyway, generally with a church on one side.
It's not whether you win or lose; it's whether or not you had a good bet.
pacomartin

According to my map this is different adjacent buildings, two of them hotels.

I thought every city in Mexico is supposed to have an empty public square anyway, generally with a church on one side.

Gran Hotel and Holiday Inn zócolo are both decent hotels where rooms are often below US$100. The Zócolo is very noisy all night long, and when it rains it becomes very wet. The Zona Rosa is the other primary tourist zone, and the squares are more intimate. The well off business traveler probably always stays at Polanco, north of Chapultepec park.

The colonial cities all have a central square. There has been discussions of building one in Tijuana, with arms wrapping across the river to connect the principal shopping and hotel zone to the government center.

While a zócalo does have the architectural meaning of a "base", it primarily means "plaza" in Mexico.

In Spain, (and I am sure in Argentina) a square is called a Plaza. The word is taken from Latin which was taken from Ancient Greek πλατεῖα (plateia), shortening of πλατεῖα ὁδός (plateia hodos, “broad way”). In English the word was adopted directly from Spanish.
Wizard
Administrator

Wizard
Joined: Oct 14, 2009
I went into the Holiday Inn Zocolo where they were kind enough to give me a map and guide me a restaurant that was open (at 5:30 AM). They could use a more attractive entry into Tijuana from San Ysidro.
It's not whether you win or lose; it's whether or not you had a good bet.
pacomartin

They could use a more attractive entry into Tijuana from San Ysidro.

In my mind's eye, I picture a 3 mile extension on the San Diego Trolley down the border towards the Tijuana airport. This last segment is raised (like the Mission Valley portion of the San Diego Trolley), and access is controlled to Americans with the passport card (with RFID chip) and Mexicans with the Border Crossing Card (also with an RFID chip). Both these cards currently exist and millions of people have them.

At the final trolley station, Americans have easy access to both a bus station and to walk to the terminal to the Tijuana airport where they can catch flights to the rest of Mexico or South America. Mexican commuters from the Tijuana area are dropped off by bus, to board the trolley. Also Mexican air passengers arriving into Tijuana airport can easily board the trolley to head towards center city San Diego.

The two types of cards are for people who are pre-screened. There needs to be a minimal space where people are randomly chosen to be searched. Pre-screening doesn't mean that someone won't set up a heroin smuggling operation if they never face the possibility of being checked.

The airport in Tijuana is extremely underutilized, while San Diego airport is the busiest single runway airport in the USA. The Tijuana airport parking garage is 140' from the border.

Wizard
Joined: Oct 14, 2009
Posts de hoyos negros e estrellas de neutrón fue mover a Difference between a neutron star and black hole.
It's not whether you win or lose; it's whether or not you had a good bet.
Nareed

The building on the left is a department store.

Was it El Palacio de Hierro?

That was my father's biggest customer for decades. For a very long time they had three stores. The opening of the 4th was like a major milestone for fine retail. The 5th took some time, but after that they opened up several more... Funny thing is I've never visited the one in el Centro.

That seems so wrong, I thought you were mistaking the word. After all, the proper term to begin with is ZócAlo. But the dictionary agrees with you. Still, the dictioanry also denotes than in mexico it means the main plaza in a city.

I thought every city in Mexico is supposed to have an empty public square anyway, generally with a church on one side.

Not every city, but many do, especially those going back to colonial times. For certain I've seen only the one in Toluca.
Donald Trump is a fucking criminal
RSS Feed