30. Over 180 companies seek to apply for an online gaming license in Netherlands. http://bit.ly/2XICgXj

20. (National) Rapper Drake’s dad is celebrating after winning a small fortune by betting on his son’s Toronto Raptors to win the NBA Finals. Dennis Graham has revealed he won $300,000 (£236,000) on the back of a $10,000 (£7,900) bet, convinced the Canadian team which made his son an ambassador would beat the Golden State Warriors in the best-of-seven basketball series. http://bit.ly/2FCpvTw

19. (New York) A gambling industry veteran has come aboard to run Rivers Casino & Resorts’ soon-to-open sports betting lounge. Hal Wafer was announced as the Rivers Sportsbook manager Wednesday, the same day state regulations for the business of sports betting were published in the state register, making them official. http://bit.ly/2XeJWRq

18. (Rhode Island) Tiverton Casino Hotel opened 10 months ago with a license for a 24-hour operation under a one-year pilot program. http://bit.ly/2KGlqlG

16. (Florida) Did Florida lawmakers legislate “responsibly” when they passed a measure that would require Florida Lottery tickets to warn buyers about the addictive nature of gambling? http://bit.ly/2Xvyq3B

15. (Pennsylvania) Salisbury Township approved zoning requests from Rutter’s that would allow for a convenience store with gambling machines in Gap during a meeting Tuesday night. http://bit.ly/2RK0YkA

15. New Jersey becomes No. 1 over Nevada in sports betting. http://bit.ly/2Ys2jyI

12. OPINION: Why Every State Should Follow Maine’s Example For Sports Betting. http://bit.ly/2YioWG3

10. New tech tools help reduce AML risk
Casino managers have a growing array of technology tools at their disposal to help them overcome money laundering risks, both in online and land-based gaming. http://bit.ly/2X34hnS

9. South Shore sells iconic Rolls Royce fleet
South Shore Holdings Limited, owner of the luxury Macau hotel The 13 has disposed of 24 of their customized Rolls Royce vehicles in an effort to pay down the group’s outstanding bank loans. http://bit.ly/2xfIL4H

3. HOW WILL ELDORADO AND CAESARS FARE AFTER $17.3BN MERGER?
M & A is the main topic for discussion this week, following Eldorado Resorts’ $17.3bn acquisition of Caesars Entertainment. http://bit.ly/2LoNfhS

32. Casino City’s Friday Five: Casino opening edition. http://bit.ly/321PvSe
The wait is finally over. Encore Boston Harbor officially opened to the public on Sunday. Casino City was at the $2.6 billion resort to cover the opening.

31. Sports bettors wager more in New Jersey than in Nevada for the first time. http://bit.ly/2YkJWM7

26. Somewhere, the Rat Pack is smiling: The name Sahara returning to the Las Vegas Strip. http://bit.ly/2YlRpdU

22. (Rhode Island) Rhode Island has reached an agreement to extend the contract of the company running its lottery systems and sports betting. Democratic Gov. Gina Raimondo and legislative leaders announced the terms Thursday, but the new contract still has to be executed. http://bit.ly/2JgAyTp

21. (Washington D.C.) Some members of the D.C. Council are again raising questions about Intralot and the gaming company’s ties to others with political connections in the city as it debates approval of a sports betting contract between the D.C. Lottery and Intralot. http://bit.ly/2LrOZqs

20. (Pennsylvania) Rivers Casino on Thursday unveiled renderings of an expanded, permanent sportsbook planned for the North Shore casino. The $5 million construction project is expected to open this fall, according to a statement from Rivers. http://bit.ly/2YjnW4v

19. (Illinois) Gov. J.B. Pritzker is poised to sign a package of bills on Friday authorizing a $45 billion plan to upgrade roads, bridges, parks and university buildings statewide, paid for by revenue from tax increases for gas and cigarettes and expanded gambling, including new casinos in Chicago and the suburbs and legalized sports betting. http://bit.ly/2Yg64HK

18. (California) A casino-owning tribe in central California has voted to expel dozens of members who were granted tribal status during an enrollment less than two years ago. The Picayune Rancheria of Chukchansi Indians in Coarsegold voted this week to cut off 60 people from a share of casino profits and other benefits of tribal membership. http://bit.ly/2YpDHHe

17. (Las Vegas) Summerlin’s developer and owner of the Las Vegas Aviators may be up for sale. The Howard Hughes Corp., developer of Las Vegas’ largest master-planned community, said Thursday its board of directors is weighing a potential sale of the company. http://bit.ly/2XaC0vN
Stephen Au-Yeung (Legend of New Table Games®) NewTableGames.com
MrCasinoGames

39. All bets are on — Illinois Gov. signs $45B capital plan, massive gambling expansion. http://bit.ly/2Lq84cP
New schools, roads and bridges. A massive casino in Chicago, and an array of new gambling options, including sports betting.

38. All backgrounds bet on becoming World Series of Poker champ. http://bit.ly/2IVowjr
Tens of thousands of professional and amateur poker players go on a pilgrimage to Las Vegas every summer in hopes of returning home richer, owning a gold bracelet and having considerable bragging rights.

34. Did New Jersey sports betting really surpass Nevada’s handle in May? http://bit.ly/2RFZk3c
The Garden State’s sports betting industry turned a year old earlier this month, a milestone for the state that fought, and won, against the sports leagues in defeating the 1992 federal law known as PASPA.

33. PHOTOS: Sahara Las Vegas through the years since opening in 1952. http://bit.ly/2Lpun2d
1952: Milton Prell opens the Hotel Sahara with 240 rooms. The $5.5 million, Moroccan-themed resort is decorated with life-size camels. Ray Bolger, the scarecrow from “The Wizard of Oz,” headlines in the Congo Room until 1957.

* Play’n GO (Mobiles): Play’n GO has had a good year from a release perspective. Has some really good UI and UX, which is very appreciated by the players. FREE-Play Casino Holdem® Power by Play’n GO on Mobile or PC: CasinoHoldemGO.com

* NetEnt (Slots): Continued growth led by delivery of quality slots via a consistent cross-jurisdictional roadmap. Great entry, with evidence of success across all categories. FREE-Play Casino Holdem® Power by NETENT on Mobile or PC: CasinoHoldemNETENT.com

Rules:
The game uses an icosahedron, which for the non-math nerds is one of the five platonic solids, in this case the one with 20 triangles.
The Die is numbered 0 to 18, plus a 00. If the 00 is rolled, then all bets have no action and the die is rolled again.
The following bets are available on the outcome of the roll. Roulette18WoO.com 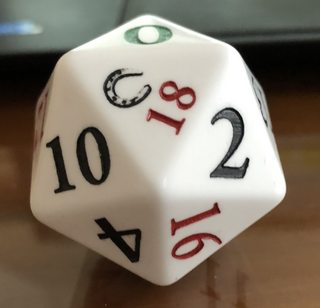 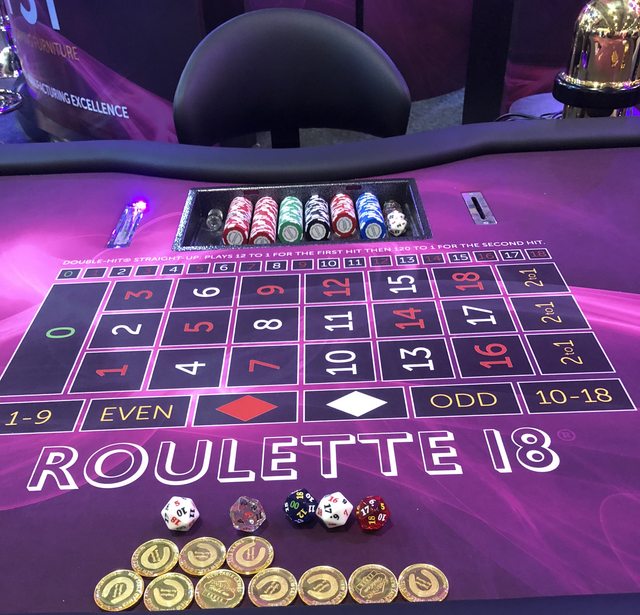 
*** LCB.org. Casino News Report - June 2019. READ: http://bit.ly/323BTFW
The summer has arrived in the Northern Hemisphere. The Sun is out, the beach is waiting on your arrival and the season is ready to start! It's time to take a break, reflect, celebrate and enjoy life to the fullest! Here at LCB, we had a great month behind us, and we prepared plenty of offers to choose from, hot as the Summer itself. So, let's check out what was going on at LCB in June! http://bit.ly/323BTFW

13. Nebraska measure could tip the number of states with casinos. http://bit.ly/2YwPoMk

12. (Massachusetts) The push to move the Massachusetts State Lottery online is forging ahead. A legislative committee will hold a public hearing Monday on bills related to the lottery, horse racing and Keno licenses. http://bit.ly/32406fq

11. (Florida) A bill that would have required warnings on all Florida Lottery tickets will not become a law. Republican Gov. Ron DeSantis vetoed the bill Friday. http://bit.ly/2XmCuDZ

10. (Ohio) A woman who fell by a collapsed “wet floor” sign at Jack Casino Cincinnati was awarded $3 million this past week by a Hamilton County jury. Lynda Sadowski walked toward the sign, which lay flat on the floor, in September 2016. Customers had knocked it over, and a Jack employee walked around it but failed to pick it up moments before Sadowski tripped over it, according to her attorney Matt Nakajima. http://bit.ly/2XeGYYp

9. (California) Sports betting legislation has once again been proposed in the country's most populous state as two California politicians presented a new bill for consideration Thursday. http://bit.ly/2NBbTOO

(Nevada) A fire dancer burned during a performance in Pahrump is on the road to recovery, though the road forward could be a bit challenging. http://bit.ly/2JvG9Wr

8. (Lake Tahoe) For Amy Berry, stepping — or riding — on the Tahoe East Shore Trail is more than a scenic stroll or pleasant bike ride. It’s like falling in love. The trail, which opened to the public on Friday, gives people a chance to immerse themselves into a piece of the Lake Tahoe landscape that was previously difficult and dangerous to access. http://bit.ly/2ZYFNOk


World Series of Poker update through 66 events. http://bit.ly/2LuBFSk
1 July 2019
With 24 events still remaining, the WSOP has already shattered the attendance record, as 147,334 entrants have played in WSOP gold bracelet events. That is already 19% above last year’s record of 123,865.