I was hoping that sports betting in Illinois would be operational by week 1 of the NFL season, I read something today that they are now hopeful it will be operational in time for the Super Bowl. Guess I gotta rest my hopes on Indiana and their shorter stream of red tape
A flute with no holes is not a flute, a donut with no holes is a danish
MrCasinoGames

19. Casinos Austria in the race for an IR license in Nagasaki. http://bit.ly/2LyVsQL

17. ‘This is going to make a lot of money’: Big turnout as Colonial Downs opens gambling parlor in South Richmond. http://bit.ly/2J4Nxsw

16. Illinois: Casino allows Rockford to ‘bet on itself’. http://bit.ly/2FKAzOE

15. $3 million and counting: What Polk County has paid a lobbyist to try to protect Prairie Meadows, tap federal dollars. http://bit.ly/2XLYBD7

14. Engraved Hennessy bottles to flying with the New England Patriots, how Encore Boston Harbor, MGM Springfield and other casinos are attracting high-rollers. http://bit.ly/2xmuCmz

13. (National) During his first year as president and CEO of the American Gaming Association, Bill Miller has had a full plate. http://bit.ly/304Jm5F

12. (Maine) Maine's governor could weigh in on legislation to allow sports betting, among other bills passed by lawmakers in the final hours of this year's legislative session. http://bit.ly/2FNHJ4F

11. (Atlantic City) As crews tore down the stages, skate ramps, wrestling ring and tents that scattered the beach between Arkansas Avenue and St. James Place on Monday morning, the aftermath of a two-day punk rock festival was evident. http://bit.ly/2XlnaT8

10. (Massachusetts) It was part homecoming and part wake for the extended New England racing family, which turned out in force to write the final chapter in the history of Suffolk Downs as live racing reached the finish line at the 84-year-old landmark June 30. http://bit.ly/2Xj1VpU

8. (Mississippi) A Madison man was being held in the Warren County Jail in lieu of $50,000 bond accused of damaging a money cage at Ameristar Casino, 4116 Washington St. http://bit.ly/2xqxtL7

7. (Indiana) A referendum on a new casino in Vigo County will be on the fall ballot. http://bit.ly/328GYwu

6. (California) Downtown Commons (DOCO) has announced a new Hard Rock Shop storefront will open on the main plaza at 10 a.m. Monday, July 1 as a lead up to the fall opening of Hard Rock Hotel & Casino Sacramento at Fire Mountain. http://bit.ly/2Yvstkq

5. (California) Sheriff’s deputies believe a shoe repair shop in the Von’s Shopping Center, in the 57500 block of Twentynine Palms Highway, was serving as a front for an illegal gambling operation. http://bit.ly/2FNGZwp

2. Sands China to pay one-time special bonus
Sands China said it will pay a one-time bonus equivalent to a month’s salary to all team members of qualifying grades as a reward for their contributions. http://bit.ly/2Jjkb8V


20. Online poker stronger than ever or gathering a new audience? http://bit.ly/2xtaoHH

17. Evolution Gaming teams up with Planetwin365 for the Italian market. http://bit.ly/2RPa5jZ

10. (Connecticut) While Sportech Venues Inc. has the exclusive license to offer off-track betting in Connecticut, that hasn’t stopped out-of-state and online operators from taking wagers from state residents. http://bit.ly/306ZFiv

9. (Massachusetts) The city has extended an interim agreement to iron out the last details of a long-term contract for MGM Springfield to manage Symphony Hall. http://bit.ly/2J9LUtR
8. (Mississippi) Gov. Phil Bryant is declaring the $570 million Mississippi port restoration and expansion project an economic success, even though the port has fewer maritime jobs today than it did before spending the money and most are low-paying jobs at a casino hotel. http://bit.ly/2KT2LTC

7. (Florida) The Seminole Hard Rock & Casino, which has a newly built guitar-shaped hotel, is holding a job fair July 7 to July 9 to hire 600 new workers. http://bit.ly/2RRwMnm

6. (Las Vegas) As illegal fireworks crackling in valley neighborhoods indicate, Independence Day is approaching. With Las Vegas ranked as a top-five destination to celebrate the Fourth of July, locals have various options on how to safely watch a fireworks show without igniting dangerous pyrotechnics, risking a hefty fine or worse. http://bit.ly/2G2AxSD

5. Professional gamblers - a rare breed indeed. http://bit.ly/2RRSWGd
All of us working in the betting and gaming industry will have seen plenty of people who claim to be professional gamblers – it seems to be an intoxicating profession, with the clichéd qualifications of vast intelligence, nerves of steel, encyclopaedic knowledge, and the will to avoid the tedium of a “normal” job. I’m sure I’m not the only person who’s looked with a pretty extreme degree of scepticism at a fair few people who claim this as their living.

3. Chinese own 90 pct of Sihanoukville businesses
As many as 90 percent of businesses in Sihanoukville are owned by Chinese nationals, according to a report from Preah Sihanouk provincial authorities. Out of 156 hotels and guest houses in the region, 150 of them are Chinese-owned, while out of 62 casinos, 48 as invested in by the Chinese, he said. http://bit.ly/2Xj3AH3

Campbell wins second bracelet of the summer. http://bit.ly/2LzspfW
3 July 2019
Robert Campbell is the winner of the $10,000 Stud Hi-Lo Eight or Better and takes the lead over Dan Zack in the Player of the Year race.

23. Macau's casino regulator says facial recognition can only be used for security. http://bit.ly/30ahVrd

19. Debate over hold percentages between slot makers and casinos not going away. http://bit.ly/2FSNpdM

12. COMMENTARY: Caesars is for sale: Let the buyer beware. http://bit.ly/2NAreiO

9. An Australian Billionaire Dynasty Confronts the End of an Empire. http://bit.ly/30aAcoh

5. Mohegan Outlines Tomakomai IR Plans
Even while the pro-IR political momentum in Hokkaido appears to have stalled, Mohegan Gaming & Entertainment is moving forward with its plans to bid for a Tomakomai IR, outlining its plans in a release to the Japanese media at the end of June. http://bit.ly/2XpNf8H

3. Melco Promotes Sustainable Seafood Policies
Melco Resorts & Entertainment is making a stronger commitment to purchase seafood products from sustainable fisheries and farms, explaining that “healthy and productive oceans are important for both marine ecosystems and the communities that rely on them for their livelihood.” http://bit.ly/2JqFBRg
2. Genting to lose ASEAN market share as Singapore, Malaysia succumb to Philippines and Cambodia: JP Morgan. http://bit.ly/2YxuzQN
The long-standing reputation of Genting Singapore and Genting Malaysia as ASEAN’s market leaders is set …

17. Mohegan partners with GEK Terna to bid for a casino at Greece's Hellinikon project. http://bit.ly/2YAjb6z

13. GVC suggests 900 of its betting shops will close. http://bit.ly/2RXSm9Q
Europe (UK) - Erin-Marie Gallagher, SBC News - GVC Holdings has responded to the news of William Hill’s shop closures by outlining that 900 of its own Ladbrokes and Coral shops could face closure, which is ten per cent lower than its previous estimates made in April. Similar to William Hill, GVC has attributed the potential closures to the FOBT stake cut brought in on 1 April of this year.

11. Waukegan starts search process for casino developer. http://bit.ly/2Jqbd9J
Illinois (expansion) - Emily K. Coleman, Lake County News-Sun - The city of Waukegan kicked off the search process Wednesday for the developers of a new casino authorized as part of the state’s recently approved gambling expansion. A request for qualifications and proposals released Wednesday afternoon asks for estimated costs of development, estimated revenues that will be generated and ideas for where and how a casino should be built.

10. The 50th WSOP Main Event begins at Rio. http://bit.ly/2RXSA0G
Nevada (Las Vegas) - Case Keefer, Las Vegas Sun - John Cynn fought to keep his eyes open and stave off exhaustion a year ago to accept the World Series of Main Event championship bracelet after a final session that lasted all night into the early morning at the Rio… Cynn claimed $8.8 million, the third largest prize in Main Event history last year, but there’s a chance this year’s first-place payout totals even higher …

3. Casino tax hike not as bad as expected, say analysts
Shares in Genting Bhd and Genting Malaysia rebounded sharply upwards following the release of their 2019 first-quarter earnings, showing the impact of the casino tax hike was not as bad as initially expected.
http://bit.ly/2LFT9es

Jul 5, 2019: Golden Nugget poised to make internet gaming history. http://bit.ly/2XvwybX
* ATLANTIC CITY — Something never before seen in the U.S. gaming industry may happen in the Marina District before year’s end. Golden Nugget Atlantic City could become the first land-based casino in the country whose internet gaming revenue matches or exceeds earnings from tables and slots. http://bit.ly/2XvwybX 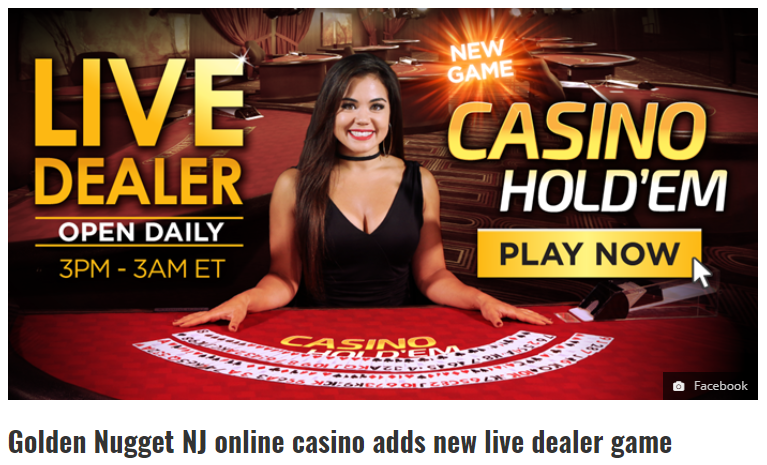 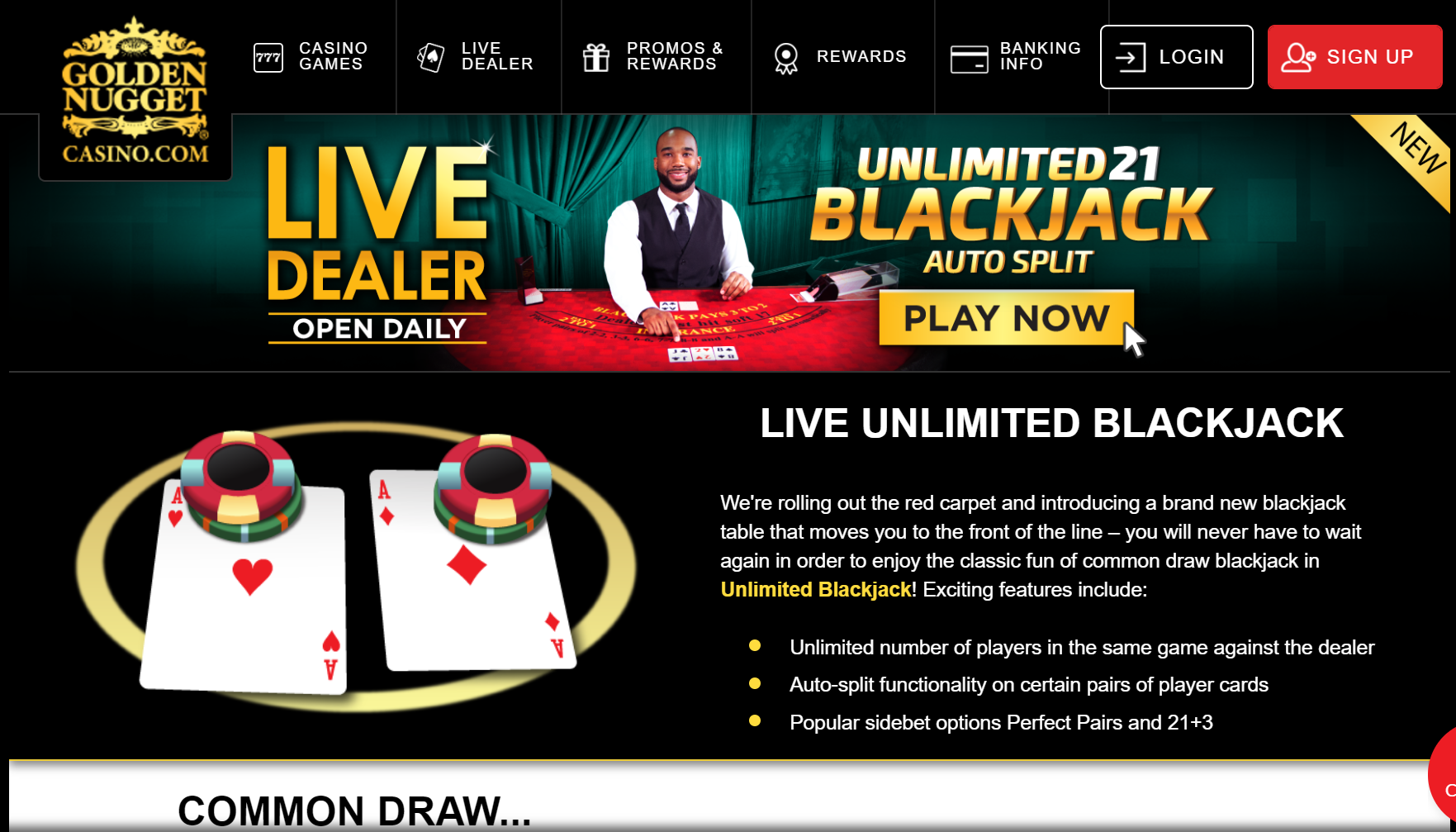 *** Block Pro® Blackjack-Progressive™ is very easy to play and delivers a fun and very rewarding Progressive-bet for Blackjack.​ The aim of the Progressive-bet is to wager on the outcome of the Players first two cards and the Dealer’s up card.
Wizard of Vegas: http://bit.ly/2S01P0A
Math at Wizard of Odds: BlockProBlackjackWoO.com

* Casino Hold'em® Jumbo-7®: THE FIRST (7-Card Jackpot-Progressive) for any Casino-Hold'em® Table-Games, by Stephen Au-Yeung in partnership with Evolution Gaming ©2017. CasinoHoldemEvolution.com
Wizard of Vegas: http://bit.ly/2HHKRlb
Math at Wizard of Odds: CasinoHoldemWoO.com 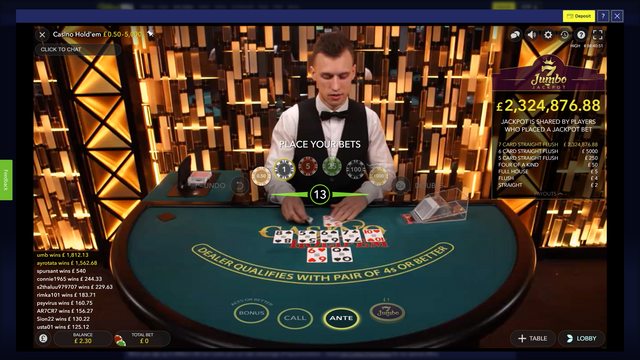 Montecasino is the unequivocal, irrefutable home of the biggest jackpot payouts in Africa.
A record-breaking R7 691 061,20 was won on 22 May when one lucky Cape Town resident became an instant multi-millionaire by playing the Raise'em® Poker-Progressive™ at Gauteng’s premier entertainment destination. 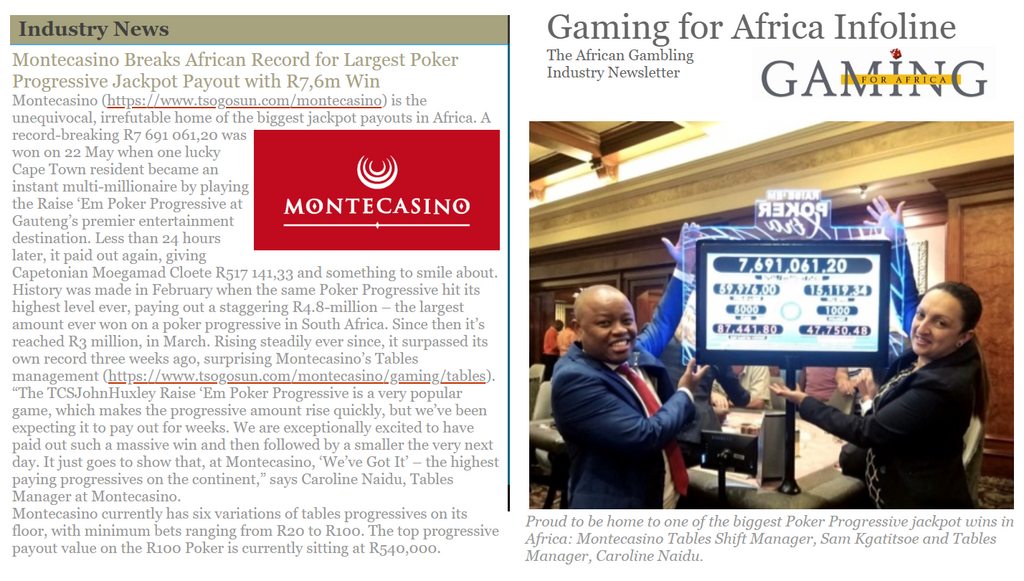