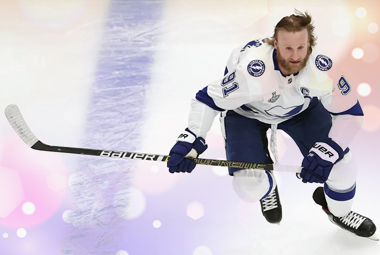 The Path to the Stanley Cup Finals

The Eastern Conference champion Tampa Bay Lightning took care of business quickly by dismissing the Columbus Blue Jackets in 5 games in the first round of the postseason, and they wiped out the Boston Bruins in the second round of the playoffs in 5 games as well. In the Eastern Conference Finals, the Tampa Bay Lightning eliminated the New York Islanders in 6 games to reach the 2020 NHL Stanley Cup Finals where they met the Dallas Stars.

The Conn Smythe Trophy is awarded to the most valuable player of the NHL playoffs, and this year Victor Hedman of the Tampa Bay Lightning won this coveted award of the National Hockey League. Throughout the 2020 NHL postseason Hedman recorded 10 goals as well as 12 assists totaling 22 points. He posted a + / - of 13 in the playoffs while scoring 3 power play goals and 3 game winning goals. His defensive efforts were outstanding too as he helped shut down the Dallas Stars’ best offensive threats. Victor put up 45 blocks, 36 hits, and 12 takeaways.

In my opinion Brayden Point should have won the Conn Smythe Trophy. Point netted 14 goals (playoff best) to go along with his 19 assists which left him with 33 points throughout the Tampa Bay Lightning’s run to winning the Stanley Cup in 2020. His + / - was at a solid 12, and he totaled 4 power play goals as well as 3 game winning goals too. Brayden also scored 2 crucial overtime goals during the Tampa Bay Lightning’s series against the Columbus Blue Jackets.

"It takes a lot to be in a bubble for 80 days or whatever long it was," explained the Tampa Bay Lightning defenseman, Victor Hedman, who won the Conn Smythe Trophy as playoff MVP. "But it's all worth it now. We're coming home with the Cup."

"That last period was probably the longest period of my life." Hedman goes on to say, "There's so many emotions at the same time."

"The beauty of our team is everyone was chipping in," Brayden Point proclaimed. "We got tremendous depth. We got contributions from anyone and everyone at different times, and that's what makes this win so special."

"These last six weeks have been really emotional for my family and I, not only on the ice but off the ice," Steven Stamkos stated. "I just want to say to my family: I love you guys so much. To all the friends and everyone who supported us along the way: We love you. We can't wait to celebrate with you." 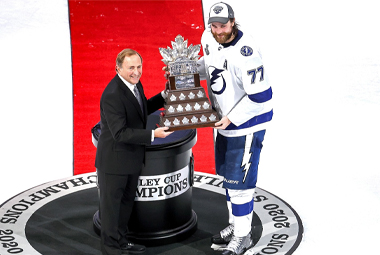 "To come back year after year and take our swings and take our licks and be talked about here as the kids who are going to be here every year -- and now we're talked about as the team who can't get it done -- and you know what? We got it done," says the Tampa Bay Lightning head coach Jon Cooper. "And it wasn't without failures along the way."

"We were in the bubble for this many days away from our friends and family, our support systems,'' Stamkos recalls. "We love each and every person that has helped us and allowed us to come here and accomplish our dream.''

"Who's next? Next question," Nikita Kucherov asked while looking into the camera.

"We knew what we were capable of with our whole roster, and we were pretty thankful to get the opportunity to come back and play," Ryan McDonagh explained.

"Obviously, we can go back and look at what's going on in the world now," Patrick Maroon stated. "I think a lot of us are going to sit back and talk about this one a lot, because this one was a special one, and a hard one to win."

"To finally be here and enjoy it, it's awesome," says Killorn. "It's kind of surreal right now, to be honest."

"Over the past six years, we've been to four conference finals and played for the Stanley Cup." Jeff Vinik goes on to say, "This time we won it."

"This was probably the toughest Stanley Cup to win under the circumstances.," Stamkos proclaimed. "It's amazing the sacrifices the families went through just to allow us to chase our dreams."

"I think his patience was probably the best characteristic," says Kevin Shattenkirk. "He showed throughout the whole way in believing in our team and believing in the guys we had in the locker room."