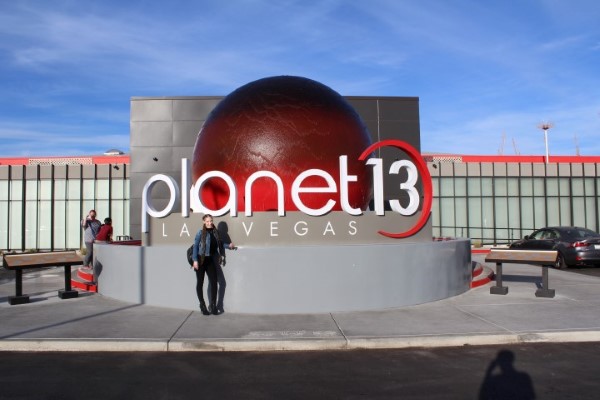 The first thing you encounter at Planet 13 is the parking lot, which was a confusing mess at the time of my visit.  There was a shortage of parking spaces so I ended up parking in a small dirt lot adjacent to the paved section of the parking lot.  Meanwhile other cars were just lingering, waiting for someone to leave a normal parking space and a host of Uber and Lyft drivers dropping off and looking for their next passenger.  There were also a host of security guards, some just standing there and others trying to direct traffic.

The building itself is enormous.  I'm not sure what they do with it all, as I would say the entrance and store occupied only about 25% of it.  Directly in front of the main entrance is an enormous red shere in a pool of water.  On top of the building are large glass flowers, which illuminate at night.  Through the front doors there is a desk where visitors must present identification to enter.  At the time I entered there was no clear line and a confusing mess of people waiting.  I won't even get into that, but I would recommend they adopt one long line leading to multiple stations, like they do at Wendy's.  After clearing the Planet 13 security and registering, they give you an entrance ticket. 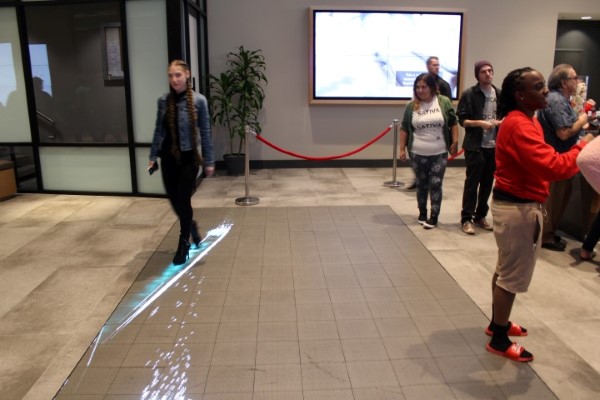 After getting past the gatekeepers, you step on an illuminated floor.  It is hard to describe but the colors changed according to where you stepped and how fast you moved.  This picture below does not do it justice, it is usually much more colorful.  Past that there are a couple places to buy souveneirs and to the right it is a system like the Las Vegas Monorail, where you put in your ticket and a little flap moves to the side to let you pass. 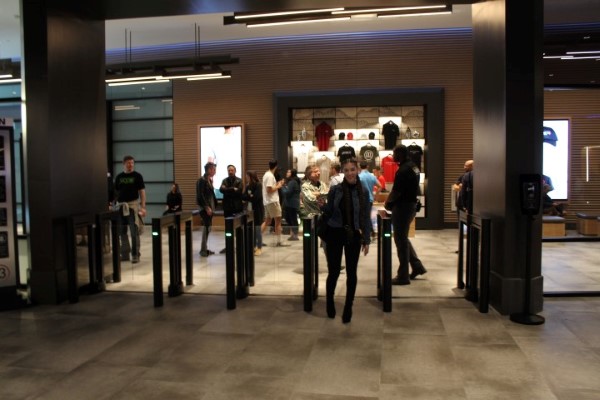 Then, at last, is the weed.  All presented in nice glass tables.  It reminded me of the Apple store.  The customer can't touch anything as it was all under glass.  Prices were clearly marked as well as the product name, weight, and levels of the pertinent chemicals.  Meanwhile, music plays and sometimes toy blimps cruised around near the very high ceiling. 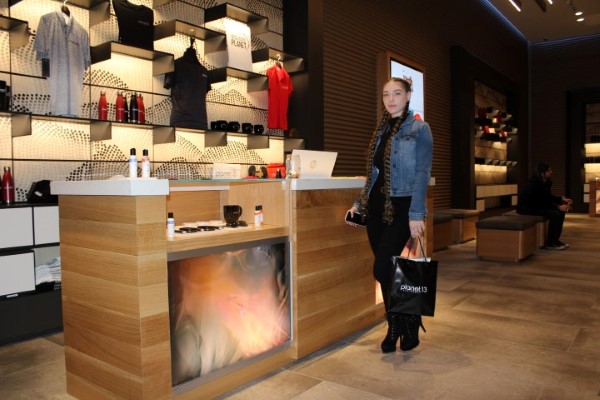 There were some salesmen floating about, but not enough of them.  Many customers, including me, seemed confused about how to actually buy anything.  Fortunatley, my companion on this trip easily got the attention of somebody just coming on duty and knew the parlance of cannabis terms and products much better than I did.  Suffice it to say our salesman was very helpful in answering my many novice questions and providing choices for what we were looking for.  The prices were a bit higher than the smaller dispensary (the Source on Rainbow and Sahara) that I'm used to, but with a Nevada 20% discount, they came to about the same.

Yes, you can still buy marijuana by the eighth of an ounce, just as everybody had to before the wave of legalization. I find it kind of interesting and sad that sizes are in both the metric system and U.S. customary units (if that is the right term). As a reminder, there are 28.35 grams in an ounce. The following table shows the range of prices on raw buds I observed based on a small sampling. It goes without saying that the more expensive product is probably higher in quality.

When I was in high school, in the early 80's, if you wanted to smoke weed, you either put some buds in a pipe, preferably a big water bong, or rolled it into a joint, which is not as easy as it looks. Being able to roll a good J got you immediate respect at my old Los Alamitos high school, a skill I never got past abject beginner in. Unfortunately for me, being able to program an Apple II computer or solve a Rubik's Cube got you absolutely no points with the ladies, but I'm getting off topic.

Fast forward 35 years (it goes by in the blink of an eye) and you can enjoy cannabis in a host of ways I never heard of until recently and many I still don't know what they are. The following table shows a number of ways to you can smoke it other than the raw product or pre-rolled joints. Also, don't call the device you vape with a "pipe," as I did before this review, it is a "vaping pen." My friend seen in these pictures kindly corrected me on that.

Finally, if edibles or skin applications are your thing, then there are a whole host of ways you can consume them. In my experience, the effect of edibles lasts but longer and is stronger, but is not as pleasant. The following table shows a host of products and prices. I know it doesn't address quantities and concentration, so please consider this information just a general guide. 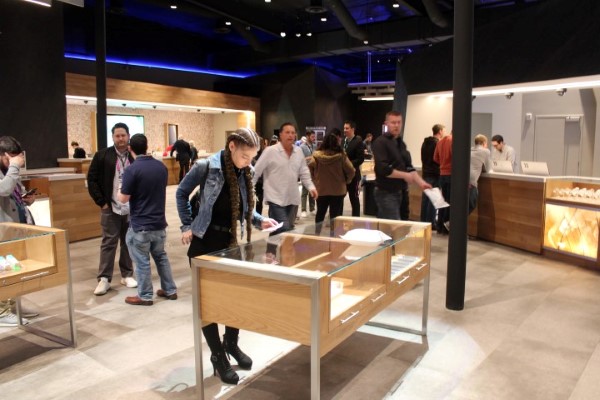 Before leaving, I took a few more pictures and couldn't resist the two for $20 t-shirt deal.  As I left the line to get in was through the door and half way past the red sphere outside the door.  However, everybody seemed very well behaved and amused.  The parking lot was even more of a crowded mess.  I thought it would take a while to navigate my car through the chaos, but I guess I got lucky and was out about five minutes later. 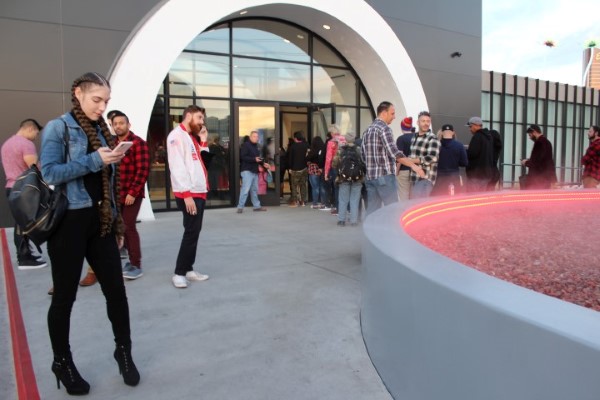 Note the line out the door.

I think you have to be 70+ yrs old [and even then, middle class etc] to not have had a good chance of being fully exposed to marijuana use among your young adult associates. So for the rest of us, I think it has to be generally assumed that the familiarity with such use, especially as a young person, can almost be taken for granted. Though it seems that it is still possible and common to halt that association later in life, the early exposure also seems to mean any feelings of disparagement amongst the latter are greatly diminished with non-users and even those who never used. That explains the current legalization trend, I think.


Nonetheless I am a little surprised that the Wizard has been so open about his own familiarity with the product, plenty enough to suggest use today, since Nevada law changed.  Perhaps things are different enough on the west coast that others won't know what I am talking about, but on the other coast the acceptance amongst professionals and in polite society is not at the level that would deem this all that smart a move if you ask me. In any case I do not want to seem disparaging myself; and maybe it is not such a big deal for a gambling writer compared to other professions. I have to thank Michael for being quite brave, in fact, and the information is useful, thank you.


Can I ask whether you internally debated this honesty? Please comment a year or two from now as well as to whether you would do it again if you could change your decision.

How about a Planet 13 review. The above can apply to any dispensary. What is Planet 13 doing to set itself apart from a run of the mill dispensary. I'll be checking this place out next month. Probably at night as I hear the lighting interactive special effects are a lot of fun

took me couple yrs to master the ‘rolling’

Little typo, should be eighth, not eight.

Thank you for the comments thus far. To address ODG's question, no, I didn't give much pause to admitting to some knowledge on the topic, although I obviously have a lot to learn about recent new ways to partake. I'm all in favor of legalization and think the world would be a better place if less alcohol were consumed in favor of more marijuana.

Thanks for the reply

It's a little creepy to me to see a syringe listed

The syringe I think is for Rick Simpson oil, which is a highly concentrated liquid form of cannabis. You don't inject it, but might put it on a piece of bread or something for relief of severe pain. I tried to get my father in law to use it the last few days he had on this earth, but he was so far gone that I don't think it helped.

I was recommended and tried an RSO out of one of those syringes for temporary pain relief by a bud tender in Washington when I came in with by far the worst tension headache I’ve had entire neck, back of head and forehead just throbbing was a little freaked out by the syringe too at first sight. There’s no needle, just apply it to food or to tongue from syringe and eat. Anyways, I took 1/2 the package which had about the thc content of 2 grams of flower, laid down at around 4-5 pm, and woke up at 8am with the sun out expecting it to be 8 pm after looking at clock. I normally sleep 6 hours or so and wasn’t particularly deprived at that time.

Who's the girl?
your new assistant?