On Saturday, April 9th, 2022 the young NFL quarterback of the Pittsburgh Steelers, Dwayne Haskins, was unfortunately found dead after he was hit by a dump truck while Haskins was crossing a highway in South Florida. Dwayne was only 24 years old, and he had so much life ahead of him until this tragic event last weekend. 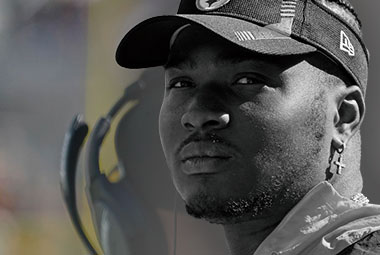 The Florida State Highway Patrol spokesperson Lt. Indiana Miranda pronounced Dwayne dead at the scene. "He was attempting to cross the westbound lanes of Interstate 595 when there was oncoming traffic," Miranda explained.

She did not clarify the reason of why Haskins was even on the highway in South Florida when the incident occurred. The occurrence resulted in the highway having to be closed down for at least a few hours on early Saturday morning, and Indiana was sure to mention that this case is "an open traffic homicide investigation."

Dwayne was in South Florida for the purposes of training and working out with some of his new running back as well as wide receiver teammates currently with the Pittsburgh Steelers franchise of the National Football League.

The former Pittsburgh Steelers legendary quarterback Ben Roethlisberger said, "I only had the privilege to know D - Hask for a short time, but in that time, I got to meet a young man that didn't seem to ever have a bad day. He came to work every day with a smile on his face and energy and love in his heart. ... Wish we had more time together on this earth, but I will cherish the time and the laughs we had!"

"I spent your final moments with you and I can't help but think about how selfless you were in those moments," the Pittsburgh Steelers wide receiver Chase Claypool emotionally expressed. "All you cared about was making sure that everyone around you was okay and I can't thank you enough for that. You are what I strive to be."

After a standout 2018 – 2019 NCAA college football season at the Ohio State University, Dwayne was chosen by the Washington Redskins / the Washington Football Team / the Washington Commanders with the 15th overall selection in the first round of the 2019 NFL Draft.

The young and promising quarterback, that was a sensational college football star that beat out Joe Burrow as the starting QB at the Ohio State University, only managed to last 2 extremely rocky NFL seasons with the Washington Commanders before signing a new deal with the Pittsburgh Steelers organization just prior to the 2021 – 2022 season of the National Football League (last NFL season).

Throughout his short and disappointing NFL career Dwayne only played in 16 professional football games during the 2 - NFL seasons with the Washington Commanders. In that time, he compiled a total QBR of 29.4, which is well below the league’s average of 63.5 over that period of time.

Haskins threw 12 - touchdown completions to his 14 – interceptions which is absolutely unacceptable in today’s NFL or any era of the National Football League for that matter. Although Dwayne never found any level of success in the NFL, he was well respected and regarded by his teammates and coaching staffs. It is a shame that his life ended the way it did.